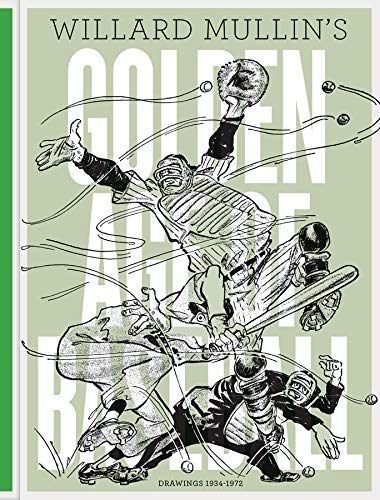 “Mr. Mullin is one of the best creators that comic art has ever produced.”

There is a grace, an athleticism, a balletic quality to the way baseball players move. They pirouette, twirl, jump, and fall, and can seemingly suspend themselves in air. They do all this to either hit or capture a little round object that is often moving close to one hundred miles an hour.

Within a second or less they have to work out complicated angles and arcs to determine exactly where in space an object will move. And they have to be in that exact space to capture that object or they will be unemployed rather quickly.

The sledgehammer redundancy of repeated replays on television has changed the way we look at these deft movements and the humans that perform them for our entertainment. The beauty behind an athlete’s skill and talent has been swallowed whole by technology, beer spots, and car commercials.

With an immediacy and intimacy seldom found in today’s sports coverage, sports cartooning brought those fleeting moments right into our hearts and minds. And no one was better at bringing those frozen moments of greatness to life than Willard Mullin.

For the decade he drew sports cartoons for The New York World-Telegram and Sun. In a city that had an ever changing number of newspapers competing for the customer’s dime his was the best.

For millions in NYC and across America his art brought the excitement of Yankee Stadium, the nimble footed fielding of Phil Rizutto and the massive greatness of Babe Ruth right into people living rooms, their town’s bars and bus stations and the break rooms of factories in a way radio never could.

There was something deeply personal about Mr. Mullin’s approach that created an unassailable bond between him and the reader. His sense of humor and the way he could capture the nature of players who were for many either gods or demons made the game seem even more real then a visit to the Polo Grounds.

For all the delicacy and detail of his line, the work he created is still filled with strength, weight, and an incredible presence. Mr. Mullin created characters such as The Brooklyn Bum or the Giant with the little head and massive body for, of course, The Giants. These could sum up an entire city and its team without a word.

These are just one example of his skill at editorializing in drawing. He drew owners playing seesaw with players over money, he put Mel Ott into the side of a cliff and he drew the Yankees both as a barrel-chested, strutting bully and a strawberry-blonde socialite.

Mr. Mullin drew crowd scenes equal those created by Richard Outcault in The Yellow Kid decades earlier. In 1935 he drew a two-page spread celebrating the appearance of the recently retired Babe Ruth at a charity game. The scene is filled with conversations that capture the seemingly endless number of experiences found at a ball game. It’s all opinions, hot dogs, arguments, screams, and parents telling kids they can’t have any more peanuts.

Sound effects are just as much a part of sports cartoons as they are a part of super heroics. A blazing fastball, like the whispered threat of “snikt” as Wolverine’s blades pop out across the top of his closed fist, screams “zing” or “screech” while the pitch peppers an ineffectual and confused batter.

And sound effects aren’t just limited to nonverbal objects. When the Red Sox were far ahead of the Yankees in July of 1951 they may have been bragging, but the most effective phrase that Mr. Mullin uses is “Yak, yak.” It is almost as if he was predicting that the Red Sox were going to fold by the end of the season, which they did.

This much deserved celebration of Mr. Mullins' work is enhanced by a wonderful encapsulation of the greatness of each decade he covered. The narrative spans some of the most thrilling stories and moments in the game’s history. Placed inside this real time context you see how much Mr. Mullin added to fans enjoyment of the drama of baseball.

There is the retirement of Ruth, the home run battle between Maris and Mantle, the long standing rivalry of the Yankees and the Dodgers, the way Hank Greenberg came so close to breaking Ruth’s record of 60 homeruns, and many, many more episodes that have made make Baseball America’s longest running and most exciting drama. (Greenberg finished two shy.)

While he did have favorites, Mr. Mullin’s generally provided a balanced coverage of baseball. Ted Williams may have complained but few could really find fault in what was drawn about him. Still, as was the time, he did convey a bit more of a sympathetic attitude towards owners, especially when “held up” by players such as Dean, Larsen, or even DiMaggio.

He had a stunning ability to capture the focus, the passion of a player. His cartoon celebrating Jackie Robins’ 1949 MVP award showcases Robinson’s absolute focus while at the same time placing his incredible achievement that season in perspective. Two years into the league and he is being ranked with the greats.

The book also features work Mr. Mullin did for programs, advertising, magazine covers, instructional books, and much more. At the end of the book Editor Hal Bock gives a brief history of sports cartooning reminding us exactly what this forgotten art form brought to people on a daily basis for over a century.

Filled with hundreds of cartoons, this is not just an overview and celebration of an exceptional artist’s career, it is also the history of America during the 20th century as seen through the eyes of one man.

Mr. Mullin is one of the best creators that comic art has ever produced. He belongs with McCay, Caniff, Foster, Herriman Barks, and Schulz.