The Will of the People: The Revolutionary Birth of America 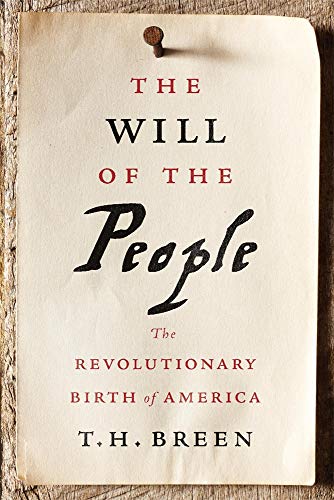 “Professor Breen has done an outstanding job of closing the loop on telling the untapped history of the average American’s role in deciding to throw off British rule and establish a new country.”

The historiography of the American Revolution has long been dominated by tales of great leaders, political thinkers, and desperate battles. Yet many colonists were far from the war’s campaigns and faced an entirely different wartime experience. Professor Breen continues to examine the American Revolution from this “bottoms-up” perspective, surveying the colonists’ struggle against the British Crown as an evolving insurgency, with ordinary farmers, merchants, and townspeople not only fighting against British rule, but struggling to maintain civil order and justice in the face of eight years of adversity and hardship.

This new book takes a look at the successful American insurgency turned rebellion turned revolution by asking some fundamental questions: Why did ordinary Americans not only join, but sustain the eight-year war against Britain? How did these same people replace the old royal civil and legal authority? Why didn’t the American Revolution devolve into the excesses of the later French and Russian Revolutions?

Most of these questions have been ignored by more traditional histories of the war, but as Professor Breen point out in the introduction, answering these questions is crucial to understanding not only why the war was won, but how the war’s impact on ordinary Americans weaved our eventual social and political fabric.

To answer these questions, the book moves through a thematic outline that closely mirrors the chronology of the war. By examining what he calls the different stages of the revolution, Professor Breen is able to uncover consistent themes that helped not only maintain the colonists’ revolutionary commitment, but curb the potential excesses of revolutionary fervor.

One of the themes that runs throughout the book is the colonists’ deep desire to avoid the breakdown of societal norms and the semblance of law and order, even as they were overthrowing British rule. Very early in the revolution, the colonists organized various “committees” that were either elected or appointed to serve as de facto governments at the state and local level or sometimes both. These committees moved swiftly to fill the gap left by the dissolution of British rule and acted as legislators, arbiters of justice, tribunals to seek out disloyal colonists, and even economic advisory boards to determine wage and price controls as the war dragged on.

As Professor Breen notes, these committees were surprisingly effective, maintaining the war effort while avoiding most of the vitriolic excess or internecine fighting usually associated with civil conflicts. Although some historians have considered the American Revolution as a civil war that pitted Patriots against Loyalists, igniting some nasty cycle of plunder and retribution among neighbors, for the most part the committees exercised a fairly light hand with British sympathizers. Although there were clearly some injustices that occurred, particularly the exile or internment of many Loyalists, the colonists valued order and abhorred a mob mentality or any action that hinted at anarchy.

Another overlooked factor is the tremendous role that religion and the local church minister played in making rebellion against the purported despotism of Britain not only a political struggle, but a theological battle as well. The fiery sermons from local ministers helped maintain the colonists’ morale by stating the war as a biblical duty to fight against tyranny and casting the war as an “appeal to heaven.”

The chapter on the reintegration of the Loyalists after peace was achieved in 1783 is particularly fascinating. Although many Loyalists fled to Canada or the Caribbean, a surprisingly large number elected to stay in the newly independent United States. For various reasons—economic, altruistic, or simply out of a sense of exhaustion and wanting to move on with life—most of these new Americans were eventually, but not always smoothly, re-integrated back into society.

As a successor volume to his earlier work, American Insurgents, American Patriots: The Revolution of the People, Professor Breen has done an outstanding job of closing the loop on telling the untapped history of the average American’s role in deciding to throw off British rule and establish a new country.