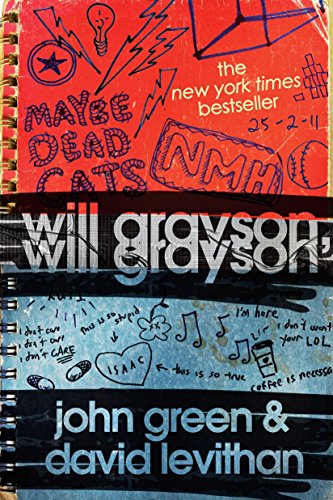 Rules of life: “Don’t care too much and shut up.” These are the rules by which Will Grayson lives. It keeps things simple and simple is good. Simple has no complications or emotional breakdowns; it’s nice and quiet, which is how Will prefers things.

Simple, however, is the exact opposite of Tiny Cooper. Tiny Cooper is larger than life, openly gay, and quite loud in general even when not producing a musical about his own life and magical journey through the world. Funny enough, Tiny Cooper just happens to be Will Grayson’s best friend. Other than Tiny, however, Will’s life is pretty low key—until the appearance of the mysterious online Isaac. Isaac is a soul mate and what gets Will Grayson through each day; he just happened to be met on the Internet rather than in person. A scheduled real life meeting at what turns out to be a sketchy Chicago Porn Shop turns up not Isaac but yet another Will Grayson—or as Tiny so dubs him: OWG “Other Will Grayson.”

OWG is gay. Will Grayson is straight. To Tiny, Will Grayson has been a best friend since grade school, but to OWG he is newest in a long line of love interests and boy toys. As the material for Tiny’s upcoming musical continues to build, readers will find themselves searching desperately to find out “Who is the real Will Grayson?”

In their much-anticipated collaboration, Will Grayson, Will Grayson, John Green and David Levithan have created two Wills whose lives intersect almost as randomly and succinctly as their names would imply. A teen journey through the lives of two characters of the same name, this book has the adventure and quirkiness that its intended audience will enjoy; however, it also contains a high level of mature content considering that it is written for teens.

Part coming of age, part simply learning to exist in your own time and place—with a dash of the usual social awkwardness of the teenager in angst—Will Grayson, Will Grayson will strike a chord with its readers, especially once they learn more about the soon-to to-be be-famous musical which affects the lives of both Will Graysons. Needless to say, an over-the-top musical about the life and times of Tiny Cooper breaks down the self-imposed rules of life for one of the Will Graysons, but then again so did being Tiny’s best friend in the first place.

An interesting read about the world of two teen boys. But just as he does in the musical, Tiny Cooper steals the show from page one.