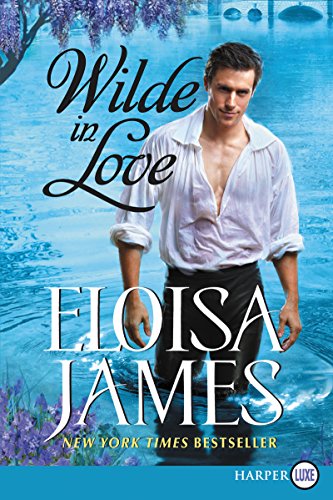 “Wilde in Love has everything readers of romance could wish, as well as a delightful twist of an ending.”

There isn’t a person in England who believed Lord Wilde’s younger son, Alaric, would grow up to become famous, though infamous was a definite possibility.

Alaric’s problem is that he has an imagination. As an adult, he went on a series of voyages, recorded his adventures, and sent them home. Imagine his surprise when he returns to England to learn that not only have his journals been published, but someone has also dramatized them into a play. Wilde in Love has become the hit of the theatrical season.

Miss Wilhelmina Ffynche is one of the belles of the current Season. She likes stories that are “honest and measured, allowing the reader to use her own imagination, rather than ladling on sensational detail.” Unlike her friend Lavinia, she hasn’t bothered reading Lord Wilde’s adventures, not even when the two are invited to a house party at Lindow Castle.

“She could scarce imagine the chaos if Wilde himself made an appearance but the man hadn’t been seen in England in years. He was probably too busy wrestling a giant squid or fighting pirates.”

Lord Wilde is home, however, having taken refuge with his parents, and is shocked to discover his current notoriety and his reaction to Willa.

Also at the house party is elder brother North’s fiancée who doesn’t wish to marry him though he is madly in love with her. In an attempt to make Diana like him, North has turned into a dandy, sporting white wigs and fancy-heeled shoes making him the butt of Alaric's ridicule.

All the other women follow Alaric like bees after a particularly delicious flower, His Lordship only has eyes for Willa.

“He had met the acquaintance of chaps whose heads barely came to his waist. In the last half decade, he’s seen an enormous white whale, the Great Wall of China, and the aurora borealis . . . and now he’d seen Miss Willa Ffynche. He wanted to kiss Willa Ffynche’s impudent mouth into silence, then coax her to speak again.”

Alaric gives himself up to infatuation easily enough but Willa’s a little more firm before her fall. “She was determined to be a perfect lady. She’d achieved it without a problem all Season and there was no reason why the arrival of one arrogant explorer should cause her to behave differently.”

His Lordship’s courtship is as unorthodox as his life. His first gift to Willa is a baby skunk named Sweetpea. Surprisingly, she accepts, though it involves giving the little creature daily deodorizing baths.

When an unexpected visitor arrived at the party, a shock of a different kind appears, as well as an obstacle to the plan to court Willa. Miss Prudence Larkin insists she and Alaric are married.

Alaric protests this is an aberration on the young lady’s part. An African missionary’s daughter, she was 14 when he met her and met her was all he did. When Willa pretends to be his betrothed to ward off the impetuous Miss Larkin, things work in Alaric’s favor, for it gives him a chance to woo her in earnest, though she treats it as part of the masquerade.

Things take a sudden turn for the dramatic when brother North’s fiancée disappears. Amidst the hue and cry of searching for her, Willa learns that Alaric’s reputation has proceeded farther than either realized and to be declared Lord Wilde’s beloved is more dangerous than they could imagine.  Lindow Castle borders Lindow Moss, a bottomless  bog where Alaric’s elder brother long ago lost his life, and it may soon claim Willa if a certain woman wanting Alaric to herself has her way.

With the aid of Sweetpea and a cork bustle, Alaric rides to Willa’s rescue.

Written along the lines of a historical romance, with bon mots, witty retorts, and a plethora of complicated romances, Wilde in Love is set, surprisingly, not during the Regency but in the preceding Georgian era, when men wore powdered wigs and knee breeches, and woman were supposed to be even subdued and non-intellectual.

Nevertheless, Alaric is everything a hero should be: brave, iconoclastic, and not one to follow the rules. Willa is his equal because she’s the same way, but better at disguising it. Their romance is inevitable, but the way it comes about is definitely entertaining.

The threads of several romances are woven through the pages and though only one comes to fruition during the story, there are cliffhangers galore that hint at more novels to follow. Since Alaric has numerous brothers and sisters, the series may be long lasting. The open ending to North’s one-sided love for Diana is definitely titillating and begs for more.

Wilde in Love has everything readers could wish, as well as a delightful twist of an ending. It will make all wait eagerly for future entries in this romantic series.