A Wild and Precious Life: A Memoir 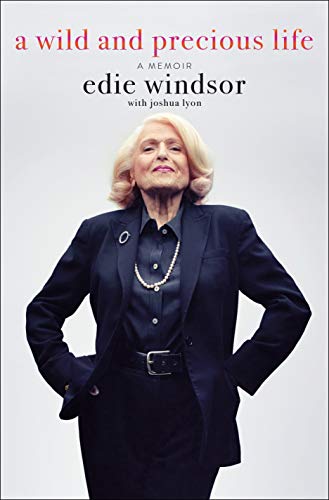 In his introduction to A Wild and Precious Life Joshua Lyon admits to being intimidated when he was interviewed by Edie Windsor in the hope that he would help write her to write about her extraordinary life. The episode gives an almost cinematic portrait of Windsor, the open-hearted intellectual, instant best friend, who just happened to be the iconic lesbian activist who successfully sued the US government.

Windsor was discriminated against for being required to pay $325,000 in taxes from her estate, because under DOMA, the US government didn’t recognize her same-sex marriage to Thea Spyer, even though the state of New York did. Thea died in 2009 and left her entire estate to Edie. Windsor sought to claim the federal estate tax exemption as her surviving spouse but was barred from doing so by the federal government. US v. Windsor was decided in 2013 in a 5-4 split by the Supreme Court, and her victory changed the lives of LGBTQ+ Americans forever.

Lyon and Windsor had not finished the manuscript at the time of her death in 2017. And Lyon wondered whether he could still finish the book. He need not have worried; the book is told mostly in Windsor’s own voice, Lyon filling in any gaps from extensive interviews, and his own research with Windsor’s colleagues, family, friends.

Her title is from A Summer’s Day by Mary Oliver, and Edie recalls many summer days, both beautiful and bittersweet, first with her family at the Jersey shore and then as an adult on annual vacations in the Hamptons with Thea and her extended LGBTQ+ family.

Edie was the youngest daughter of James and Celia Schlain; she was close both to her brother Blackie and with her older sister Dolly, growing up in Southwest Philadelphia, near of the University of Pennsylvania.

Edie was a typical teen, a tomboy, as they used to say, and otherwise a beautiful young woman who dated many boys in high school. But she also didn’t try to deny her attraction to some female friends.

Meanwhile, Edie was a gifted student all around and a math prodigy. She went on to get a degree at Temple University in Philadelphia and her masters in mathematics at NYU. She continued her advanced studies on an IBM fellowship at Harvard University for two years, was soon hired by the company, and within ten years was a senior executive.

By then she was a denizen of the gay nightlife in Atlantic City and started meeting women. Soon enough she moved to New York for her job and the freedom to have lesbian relationships outside the gaze of relatives and friends in the Philadelphia region.

Windsor was leading a double life, keeping her lesbianism in the closet at work and from her family. Edie caved in to straight oppression and convinced herself that if she was going to have a career and a family she willed herself to marry a man and agreed to marry Sal. They moved to Baltimore to start a new life and within a year she knew it wasn’t going to work and confessed to him that she was a lesbian. They divorced but remained lifelong friends.

Then Edie met Thea, a successful clinical psychologist from a wealthy Jewish family that was forced to flee Europe when the Nazis seized power. Thea was also on the party circuit in New York and the Hamptons and dating several women. It got so serious with Edie, she pulled back; but Edie was deeply in love so much so that she left her because they weren’t exclusive. Thea decided Edie was indeed the one.

They moved in together and were on a blissful, seemingly permanent honeymoon. Both had successful careers and they had a beautiful Manhattan apartment and a summer house. They also had a wide circle of equally successful and exciting gay friends and the lesbian community in Manhattan in the ’60s. They frequented the dance bars and could clear the floor with their disco moves.

Windsor also writes inspiringly about how the lesbian community in New York stood in solidarity with gay men during the worse years of the AIDS epidemic in New York.

Edie and Thea had everything they wanted when Thea's MS started to debilitate Thea. Instead of being defeated by each new physical challenge, they faced it as a team; they surmounted every challenge. Thea refused to cut down on work, seeing her patients in a home office. They continued their activist work for LGBTQ+ civil rights.

Thea had almost total paralysis, and all that would entail arranging a wedding in Canada to get married, not only to publicly acknowledge their relationship but to secure any legal standing as a couple. You would have to have a heart of stone not to be moved on the chapters on Edie and Thea dealing with everything they did during that time in their lives.

As Edie prepared for the case that ended up a landmark Supreme Court case, she also fell in love again, remarried and continued her journey on her singularly wild and precious life.