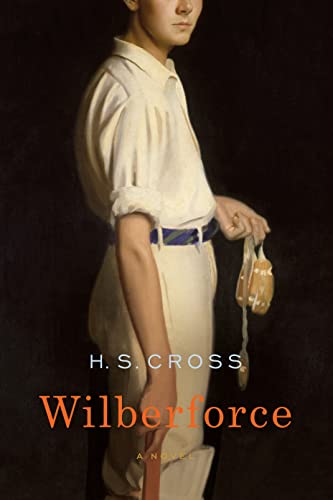 “The author crafts passages of agonizing psychological self-torment with a master's ear for the perfect phrase.”

“Morgan Wilberforce is disobedient, headstrong, reckless, sexually immoral, a hard drinker and smoker, and nowhere near as clever as he imagines.” In St. Stephen's Academy, a boy's boarding school in Yorkshire, England, the new headmaster takes a withering appraisal of Wilberforce. The year is 1926 and the General Strike is in the air.

H. S. Cross's debut novel, Wilberforce, recounts the terrors and tribulations of Morgan Wilberforce as he struggles with abusive older students and insatiable lusts. Ms. Cross imbues her writing with a thorough verisimilitude. Although the author was born and raised in Grosse Point, Michigan, the novel presents itself in complete mastery of British English and 1920s boarding school slang.

Throughout the novel, Morgan Wilberforce, for all his cheeky intellectual pretension, remains a permanent screw-up. The novel begins with Morgan in The Tower, the academy's infirmary. Having suffered a grievous injury on the rugby field, Morgan swoons over his quarry, the dreamy Spaulding. But since this is the twenties and a boarding school, Morgan must internalize his homoerotic desires.

When not pining for Spaulding, Morgan contends with the abusive Silk, an older student who takes to giving his younger charge a Sadean education in cruelty and sexual abuse.

Although all this may sound dark and drab and unpleasant, Cross presents the novel as a comedy of manners. The comedy comes in expertly plotted scenarios, each tight little scene leading inexorably to the next scene, culminating in something devastating and hilarious.

Like the works of Evelyn Waugh, the devastation and hilarity often occur simultaneously. Decline and Fall and Brideshead Revisited seem the natural antecedents to Wilberforce. The constant tug of faith and desire get respectful treatment, the novel edging to the border of farce, but never descending into a comic absurdity. The serious topics don't become overly solemn or overly dour. The moral consequences of Wilberforce's screwups receive thoughtful realistic treatment, but the moralizing receives a much-needed leavening with comedy.

The hothouse atmosphere of St. Stephen's commingles a homosocial environment with repressed homoerotic desires. Unacted upon desires become unleashed in secret trysts and public abuse. England in the aftermath of the First World War takes up airs of sophistication and civilization. The boarding school operates as a factory churning out obedient civil servants assigned to manage the United Kingdom's global empire. In order to do this, corporal punishment is used with a cruel regularity. But this cruelty does not go unanswered, as a revolutionary spark turns into a firestorm among the lower forms (akin to lower grades in U.S. schools). So besides dealing with his desire for Spaulding and the cruelty of Silk, Morgan has to negotiate the revolutionary amorality of Alex and the double-dealing of Rees.

H. S. Cross has created a lived-in world with a variety of memorable characters. While the terms “achingly poignant” and “exquisitely crafted” have become book reviewer boilerplate, repeated to the point of meaninglessness, Cross writes with a beautiful precision. Her depiction of inner emotional turmoil inside Morgan Wilberforce's head could be among the best anywhere. The author crafts passages of agonizing psychological self-torment with a master's ear for the perfect phrase.