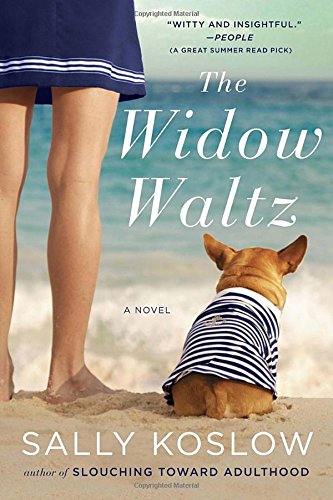 And what a situation it is. In Sally Koslow’s The Widow Waltz the reader is introduced to longtime married Georgia Waltz. She feels her life quake at its foundations the day her recently deceased husband’s will is read. After a lifetime of plenty, she’s left with little more than a relative handful of cash and a huge stack of bills.

Poverty is obviously relative as is revealed when Georgia settles into letting the chauffeur go, reducing the housekeeper’s hours, selling a lifetime of luxury goods, and putting her two houses and three cars up for sale. She also sets her mind to the sale of her jewelry collection, and that’s where things get complicated. Suspicions about her husband’s infidelity are reawakened, and she’s off to find out who, what, why, and where the family fortune went.

New York City and the Hamptons are sketched quickly but completely; Koslow captures both the vastness of the city and the insular qualities of Georgia’s strata of society equally well.

When Georgia’s mother dismisses gossip from her vituperative rival with: “Give me a break. Your Phyllis lives in Westhampton. That doesn’t even count,” the class division between Georgia’s “people” and the rest of the world is icily clear.

Fortunately, Koslow is a fine, clear writer. Georgia and her spoiled 20-something daughters become surprisingly sympathetic characters in her deft hands. They are by turns funny, sad, and frustrating; in other words, lifelike.

Georgia’s struggle to understand how she found herself in her straitened situation and to keep loving the man she’d fallen for in college is poignant. Most importantly, Georgia grows as a character; she figures out her issues and moves ahead with her life after Ben with grace, humor, and humility.

There is a certain Cinderella air about The Widow Waltz. Other widows in Georgia’s situation can only dream of having the resources to carry on as easily as Georgia and her girls carry on—her biggest lifestyle heartbreak seems to be home hair coloring—and being paid $2,000–$3,000 a month for “editing” college application essays (not to mention the dog walking/boarding income her daughter makes) is an eyebrow raiser for those not from the area. Call it an urban fairy tale for non-Manhattanites.

There is an issue with the romantic component of the story. The romances of the Waltz women are all rushed and perfunctory; none of the putative suitors are more than cardboard cutouts of men. They seem unimportant to Koslow rather than being a product of a writer who cannot write men well, as she does a marvelous job of fleshing out the characters of Georgia’s brother, Stephen, and his partner, Daniel. Perhaps Koslow thought she needed to include princes for her princesses, but the story could have left out all of the suitors and not lost any of its charm.

The fairy tale continues to the denouement of the book, though there it falters into utter unbelievability. Still, The Widow Waltz is a comfortable read (if somewhat foreign to most women’s experience). Koslow ties up her loose ends, reveals what did happen to the money, and keeps Georgia likeable. That is a feat worth celebrating, and this is a book worth reading—if only for the writer’s charm and way with words.