The Wide Lens: A New Strategy for Innovation 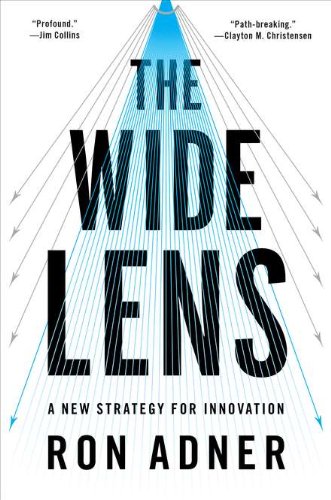 “The Wide Lens offers readers a guide to get to the bigger picture and expands critical thinking to find the possible problems and issues that can destroy the prospects of innovative products and services. If a wider lens had been used in conjunction with the creation many failed, but valuable innovations in the past, the world might be a quite a different place today.”

Many companies think they are doing everything right: knowing the customer, providing innovative products, and being early to market. But is all of that enough? No. The facts are that many companies fail because they don’t understand the innovation ecosystems and value chains surrounding them. Success requires more than just understanding your own environment, but also your collaboration partners.

In The Wide Lens, innovation expert Dr. Ron Adner draws on over a decade of research and field-testing to take you on far ranging journeys from Kenya to California, from transport to telecommunications, to reveal the hidden structure of success in a world of interdependence.
The Wide Lens is a thoughtful and engaging study that offers a new perspective on triumphs like Amazon’s ebook strategy and Apple’s path to market dominance; monumental failures like Michelin with run-flat tires and Pfizer with inhalable insulin; and still unresolved issues like electric cars and electronic health records.

• Nokia spent millions to be first to market with a 3G handset, but failed to profit because critical partners in its ecosystem did not complete their innovations in time. By the time customized video streaming, location based services, and automated payment systems were finally ready, so was the competition. This same dynamic plagues 3D TVs today.

• Pfizer’s inhalable insulin approved by the FDA, hailed by Wall Street analysts, launched with huge fanfare ended up as one of the biggest failures in the history of the pharmaceutical industry when endocrinologists wouldn’t embrace the requirement of lung function testing.

• Michelin’s big innovation in tires—designed to run for 125 miles after a blowout—failed to take off, despite the backing of major automakers, because the company failed to see that there were insufficient service centers to repair these run-flat tires before going to market.

Examples of companies taking on the difficult, but powerful concept of proactively addressing the ecosystems relevant to their categories and products are:

• Apple and its iPod and then iPhone, while great products, were truly successful because of the brilliant work Steven Jobs did in timing his innovations in line with development of the proprietary ecosystem he built around them. This story is well worn, but a more telling example is the more recent development of the iPad and the need for Apple to ensure that content providers (outside of Jobs control) would engage and support the nascent opportunity.

• Better Place is a battery and electric vehicle charging start-up that has contemplated the importance of the ecosystem from the start. It has carved out an interesting approach and unique business model for battery swapping that removes much of the upfront cost and may accelerate adoption of electric vehicles.

• Digital Cinema Initiative (DCI) is an example of a consortium of movie studios coming together in a unique way to overcome the cost of adopting digital film within the theater value chain. In essence, it has subsidized and shared the cost of capital investment in smaller theater chains to ensure that digital film would enjoy the broad distribution and availability critical to its growth.

When Sony released its electronic-book reader in 2006, excitement reigned. With its innovative screen, large memory, and search capabilities, the reader was expected to be a big winner. In Sony’s case, according to Dr. Adner, the company built a strong hardware platform, but couldn’t motivate book publishers and online distributors to deliver e-books to buyers.

In contrast, Amazon’s Kindle, launched in 2007, did not match the Sony device in terms of hardware quality, but it provided publishers with powerful incentives like pricing subsidies and strong antipiracy protection. “Sony was first to market with a great product, but Amazon was first with a full solution. In an ecosystem world, solutions win.”

The Wide Lens offers readers a guide to get to the bigger picture and expands critical thinking to find the possible problems and issues that can destroy the prospects of innovative products and services. If a wider lens had been used in conjunction with the creation of many failed, but valuable innovations in the past, the world might be a quite a different place today.

Alex Hapka, Ph.D. is the Chair of the Graduate Studies in Management program and Associate Professor of Finance at MidAmerica Nazarene University as well as the author of several journal articles in management science applications.