The Wide Circumference of Love: A Novel 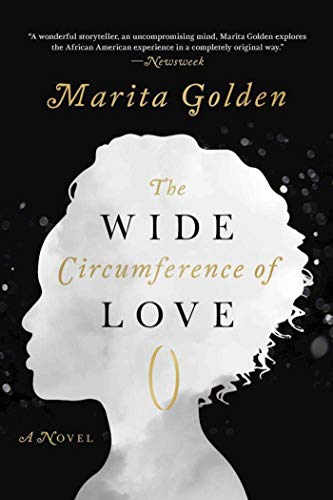 “a love story that is also a survival story of beauty and hope.”

Marita Golden has written an important and helpful novel. The Wide Circumference of Love is about the devastating impact illness can have on a family. Golden writes about the Alzheimer’s disease.

The book is well researched which at times can be a small problem. There are a few places in this novel where one feels the reader is being directed to a health website or being given a tour of an assisted living facility. Still, a book from Marita Golden is often a reason for celebration.

In The Wide Circumference of Love she introduces Diane and Greg Tate and their children Lauren and Sean. Greg Tate is a successful architect, and his wife Diane is a judge. The fact the Tate family is middle class is a reminder that illness cannot be stopped or prevented by wealth.

Golden’s novel is a good read because she explores the impact of Greg Tate’s mental decline on all the people he loves. Golden, however, takes a big risk when she attempts to write from inside Greg’s mind. One can only imagine what Alzheimer does to the brain with its growing erasing of memories.

The Wide Circumference of Love is centered around Diane Tate’s decision to move her husband to a place where he can be better cared for. This difficult decision is one that deeply affects Lauren and Sean.

Marita Golden’s novel is a tapestry of family stories woven together with its secrets and pain. To some degree Golden’s writing is more moving when she is writing about life’s unpaved road than when she examines romance. There are too many bookshelves filled with a crop of poorly written black love novels. Yes, these books should be judged by their covers, which often consist of black people in suffocating embraces. Golden’s book should not be tarnished by any comparison. Her novel is one of substance and should find an audience beyond black women book clubs.

The Wide Circumference of Love is a novel set in Washington and Marita Golden doesn’t let the reader forget it. She is a writer also holding onto the city’s memories. What happens when people suffer memory loss is similar to what happens to cities. There is decline and death. How one confronts this reality is perhaps linked to the ability to strengthen and widen the capacity to love.

As one moves toward the end of the novel, it feels as if Marita Golden wants to leave the reader with a happy ending. This is excusable because today’s storytelling has too much reality surrounding it. Alzheimer’s is crippling and awful and one need not be reminded of its crimes. Thanks to Marita Golden one can read a love story that is also a survival story of beauty and hope.