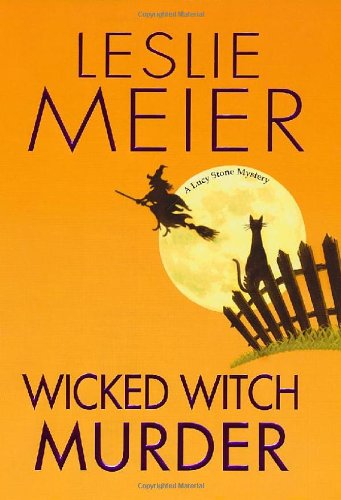 Lucy Stone, wife, mother and newspaper reporter in Tinker’s Cove, Maine has her hands full. Along with taking care of her family and her demanding job and trying to coax her garden into flourishing, she has also taken on the task of helping to plan the town’s annual Halloween party.

Then Diana Ravenscroft—a professed witch—arrives in town and opens Solstice, a shop that sells jewelry, candles, and crystals, as well as providing psychic readings. Lucy agrees to attend a reading with three of her pals even though she does not believe in the supernatural, which she calls “hocus pocus.” Then many of Diana’s prophesies come to pass, and Lucy becomes unnerved.

Walking her Lab one afternoon in the woods behind her house, Lucy happens upon the burned body of a man manacled to a tree. Panicked, she calls the authorities, who later identify the man as local magician who may have been more than just a harmless children’s entertainer. Learning he held an important role in Diana’s religion, Lucy becomes apprehensive of the woman, especially after Diana refuses to divulge any information about him or her faith. Diana soon becomes the target of local hysteria due to certain mishaps around town, so Lucy reluctantly agrees to her request and allows her to be a houseguest. Her two teenage daughters, on the other hand, are delighted, for the newcomer and her mysterious ways intrigue them.

When the area is besieged by several adversities, local surveyor Ike Stoughton casts aspersions on Diana. Lucy begins to doubt Ike’s contentions against Diana, and though she does not believe in Diana’s Wicca faith, she “gives the devil her due.”

As Halloween approaches, Lucy worries about her ability to fulfill her role in the festivities. She feels something sinister is underfoot. Then her own life is threatened and Lucy begins to understand that there is more at stake than Diana and her beliefs. Who or what exactly is causing problems in this little township? Can Lucy find the answers she seeks?

Lucy is a modern wife, and though this is not a romance novel, unlike in many contemporary tales, she does not seem to be concerned with her husband Bill, for she often mentions him in a blasé manner as though he is nothing more than a fixture in her life. She appears to be more in tune with her dog, her job, and her friends, which is a bit disconcerting.

Though the characters are well defined (except for Bill) and the plot is packed with tension and suspense, there appear to be several inconsistencies in the story, which may very well confuse the reader. Ultimately, this is a lukewarm read.