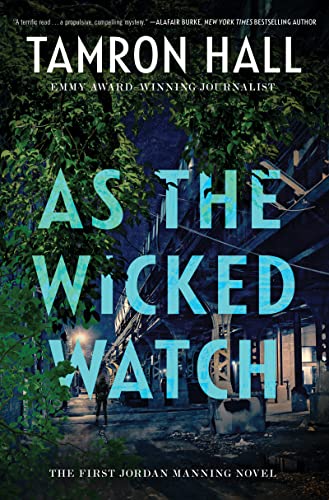 “From the first page, As the Wicked Watch, told in first person through the eyes of Jordan Manning, straps readers in and takes them on a breathless and bumpy ‘whodunit’ ride that has readers guessing until the last pages.”

There’s a growing wave of discontent over the number of unsolved murders of Black women in Chicago’s South and West Sides. The latest victim is Masey James, a 15-year-old high school honors student. Her remains are found in an abandoned playground in South Side’s historic Bronzeville community, once known as the “Black Metropolis,” that today is slowly gentrifying.

Some of the news media refer to Masey as a prostitute. But not Jordan Manning. A crime reporter from Texas who has worked her way up the ranks from small television markets to Chicago, one of the most sought-after markets for a TV journalist in the country, Jordan is committed to covering the tragedy sensitively and doing her best to maintain Masey’s and her family’s dignity. Because Masey isn’t just the topic of the latest story. She is somebody’s child.

Jordan is a badass. Always arriving first on the scene of a story in her stylish, fitted ensembles and designer stilettos, getting the interviews and ready to go on camera with a live shot when she gets the cue, delivering a textured, flawless report in the 45-second time slot she is given.

She is also adept at maneuvering her way around the politics and competitiveness of the newsroom where she is one of the few African Americans on staff.

But as she digs deeper into the story of Masey James’ murder she finds herself wading into uncharted territory. All of her journalism skills are put to the test. Her uneasy relationship with police sources becomes strained. Her interactions with Masey’s family and the Black community have herself and those around her questioning her ethics. She can’t seem to keep herself from crossing the line, taking on the role of undercover investigator, putting that college minor in forensic science to use.

As her reporting moves her closer to finding out the truth behind Masey’s murder, Jordan’s discoveries put her own life in peril.

From the first page, As the Wicked Watch, told in first-person through the eyes of Jordan Manning, straps readers in and takes them on a breathless and bumpy “whodunit” ride that has readers guessing until the last pages.

It reads like a suspense novel wrapped in a memoir, reflecting on the life of a star TV reporter working on the big stories in a major market. Not surprising, considering the author, Tamron Hall, is a broadcast journalist. She first worked in small market stations in Texas and later covered breaking news as a general assignment reporter in Chicago before moving on to NBC News. She can now be seen on her self-titled daytime talk show. Tamron Hall has not only covered tragedies for the news but has experienced her own. In 2004, her sister was murdered following bouts of domestic violence. The author advocates for victims of abuse.

Those aspiring to become broadcast journalists, especially young women, may find As the Wicked Watch to be a must-read career book on the profession. Scripted newscasts put the reader at the news anchor desk in the studio and on the scene of the story. As a former broadcast journalist myself, I find the depictions of the personal sacrifice, commitment, and composure under pressure required of a TV reporter to be realistic.

References to African American history woven throughout the story are a welcome touch, and anyone who has spent a significant amount of time in Chicago will be able to visualize the popular landmarks.

At times the book becomes preachy, giving Jordan’s views on numerous issues, including the perception surrounding gun ownership along racial lines, the merits of journalists shielding the public from the more gruesome details of a crime story, the sacrifices she’s made in her personal life and the work she’s done to gain the trust of the Black community.

“Because I am a Black woman in this job, there is an unspoken acknowledgment by people in the community of the struggle that it took for me to get where I am. I’m media but also kin. They want me here. In moments like this, when I feel people’s distrust of the media melt away, I feel like a local, though their warmth has limits.”

During moments like this, which are sprinkled throughout the book, the reader is taken out of the moment and out of the story. Some of Jordan’s expounding would be better served as launching points for Op-Ed pieces written by Tamron Hall. She is making Jordan Manning do too much. Jordan is not only telling her story, but also serving as a mouth piece for Tamron Hall’s causes.

As the Wicked Watch will leave readers thinking about themes of domestic violence, racial profiling, police conduct, and the humanity of the TV news reporter behind the microphone long after they read the last page. And there are many more pages to come. As the Wicked Watch is the first in a series of Jordan Manning novels.

Lisa Braxton is the author of the novel, The Talking Drum, winner of a 2021 Independent Publisher (IPPY) Book Awards Gold Medal, overall winner of Shelf Unbound book review magazine’s 2020 Independently Published Book Award, winner of a 2020 Outstanding Literary Award from the National Association of Black Journalists, and a Finalist for the International Book Awards. She is an Emmy-nominated former television journalist, an essayist, and short story writer.