Why You Should Be a Socialist 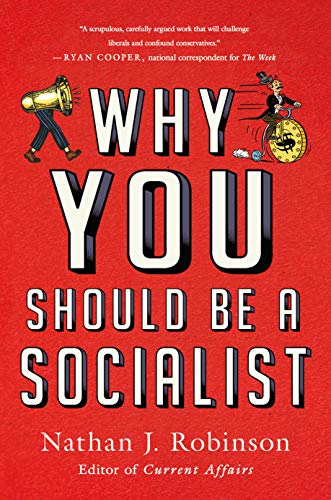 There are only a few introductory texts on socialism that manage to be accessible, witty, and broad enough to survey its history as well as contemporary thought on the subject. Nathan J. Robinson’s new book, Why You Should Be a Socialist, is able to do just that by weaving together a compelling narrative and excellent arguments that cover the rich practical and theoretical implications of socialism in a down to earth, entertaining way.

There are serious holes in the book’s content with regards to theory, however, as well as a reluctance to demonstrate if contemporary “democratic socialism” is up to the task of revolution. On the whole, the text provides many convincing arguments to win over skeptical progressives, centrists, and even conservative readers who perhaps have never deeply considered the case for socialism.

Robinson begins the book by addressing the fundamental impulse that socialists share: revulsion at gross inequalities and inhumane conditions that are the direct consequences of our dominant socio-economic system, capitalism. This is where Robinson’s work truly shines. He is able to clearly show how socialist or least anti-capitalist thought is permeated by the notion that mainstream politics and finance are anything but normal in regard to human decency and meeting basic needs. What socialism contends, and what Robinson easily and deftly spells out, is that our economic system is not simply unfair or “the way things have to be.” Rather, capitalist institutions are set up to perpetuate systemic injustices including mass poverty, institutional racism, and imperial wars and foreign conflicts.

Part One of the book (chapters one through three) dives into the failures of capitalism in detail, and the author cites many common studies and figures which bolster the arguments for socialism. What Robinson hits on over and over, to his credit, is to explain how completely arbitrary and cruel contemporary capitalism is.

It is important to note that socialist thinking does not have to come from theoretical teachings or ideology. Instead, innate curiosity and what Robinson calls a “moral instinct” provides the natural tendency which grounds socialist thought. Here we can see clear articulations as to how and why capital relies on human immiseration for continual self-expansion, and how it chooses profits over people time and time again. This section does have convincing arguments to persuade open-minded liberals and skeptics.

Part Two dives into defining principles and terms associated with the left tradition, as well as expanding on modern utopian ideals and pragmatic agendas that socialists of today advocate for. At its core, socialism is about expanding democratic values and empowering workers, and Robinson’s analysis reflects this.

Yet he seems to continually pepper his own belief system with the common qualifiers such as “libertarian socialist” and “democratic socialist.” Robinson also errs by unduly misrepresenting Marx and Lenin, even throwing in a baseless quote from Murray Bookchin about Marx as if to prove his point. A few pages later, Robinson is quick to cite Hellen Keller’s importance to American socialism, and rightly so; yet this reviewer is left to wonder if he is aware that Keller repeatedly praised Lenin throughout her life.

Part Three demolishes the usual conservative and liberal arguments and opposition to socialism. It’s quite an entertaining read, and Robinson deftly dismisses both the intellectual bankruptcy of conservatism and the inadequate wishy-washiness of liberal thought.  The section “Response to Criticisms” also does a good job explaining the bad faith mainstream critics use in lame attempts to discredit socialist thought. There is one notable exception, however, in which the author seriously errs in his attempt to bolster his argument by relying on discredited propaganda.

Robinson tries to explain how the capitalists’ talking point: “if you want socialism you’ll end up with Venezuela” is an absolute canard. Capitalists love to point to economic hardships in the developing world as being caused by socialism no matter what, obviously.

What’s bewildering, however, is the author’s insistence that Venezuela cannot be an example of socialist failure because in fact Venezuela does not have socialist policies. Amazingly, Robinson repeats mainstream lies and distortions, and attributes the crisis almost solely to internal “poor economic policies,” “authoritarian government,” and a “corrupt kleptocracy.” This is an uneducated viewpoint, one that does not take into account the worldwide drop in oil prices which hurt the spending power of the government; the sanctions, covert action, and economic sabotage from the US; and purposeful withholding of household goods and supplies by Venezuelan corporations and oligarchs who support the US-backed opposition. This is a prime example of what some humorously refer to as “State Department Socialism,” and was cringe-inducing to read. There are only three types of people who cite the Wall Street Journal and the Washington Post as credible sources on Venezuela: the educated fool, the sycophantic quisling, or the total sociopath; and Robinson appears to fall into the first category in this instance.

As founder and editor of Current Affairs, the leftist/progressive website and magazine, Robinson’s ideas are passed around the admittedly tiny socialist community and this book cannot be disentangled from his wider media footprint. Current Affairs does have some good content for socialists and younger “baby leftists” and poses itself as more down-to-earth and irreverent compared to venues like Dissent or Jacobin.

Robinson is even maligned online, perhaps a bit unfairly, for his (possibly?) affected accent and his fashion sense; in his book he correctly identifies these sorts of criticisms as liberal tendencies. In his section on the inadequacy of liberals, he describes the way a “politics of attributes” is invoked, which is a good way of summing up the superficiality of liberal identity politics and woke political correctness. The ranks of lefties and socialists have a long, proud tradition of being filled with eccentrics, after all.

More to the point, valid critiques of this work as well as the wider milieu of Current Affairs and the above-mentioned outlets focus around immature and indecisive ideology and policy proposals. Robinson’s own brand of libertarian socialism in the book is never really developed or expanded upon, and he does not bother to delve in and explain how he reconciles his own beliefs with democratic socialism. His passing references to Marx are, frankly, embarrassing. The paucity of references to leftist movements internationally and in developing nations is a problem. The criticisms of Venezuela are unfounded; he attempts to attack from the left but uses mainstream arguments and sources from the Wall Street Journal, for crying out loud.

This book reflects a lot of tendencies of younger democratic socialists and millennial left politics. It’s immature, brilliant, clumsy, utopian, sentimental, geeky in an endearing way, out of touch, starry-eyed, short on history. It’s at turns sprawling and ambitious; it’s also characteristically insular and, again, mostly bereft of historical materialism and internationalist influences. Like the wider projects of the Democratic Socialists of America (DSA), Robinson’s own work elides the issue of his own privilege and how it is being leveraged to network and strengthen the “pragmatic” opportunism of socialists and social democrats trying to work within the inherently corrupt Democratic Party.

The text does exhibit some elements of salesmanship that can be at different points irritable or likeable, with a witty joke here, a silly pop culture reference there. In spite of the laid-back prose, there is a sort of striving, overachieving tone.

It does appear that the author wants to be seen as a very serious person: see Current Affairs’ interviews with very important people, rock stars of US “progressivism” such as Noam Chomsky, Ilhan Omar, Naomi Klein, but no one, well, too subversive.

The bio in the book jacket (“Robinson is a leading voice of millennial left politics”) even mimics Jacobin’s byline: “Jacobin is a leading voice of the American left.” For those being introduced to leftist thinking, the book does a good job explaining some of the moral and practical reasons in favor of socialism. Those already steeped in theory and practice will find much familiar ground covered, as well as having to deal with the frustration of imprecise and immature reasoning from a self-proclaimed “leading voice.”