Why We Write: 20 Acclaimed Authors on How and Why They Do What They Do 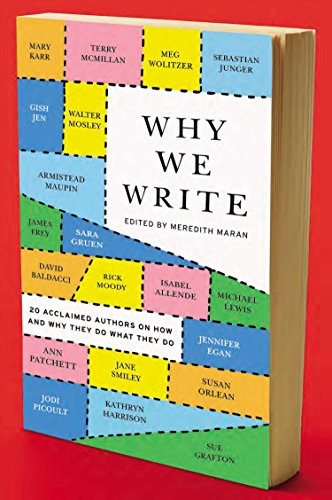 “. . . an entertaining book for fans and writers of all levels.”

The movie stereotype of a writer starving and struggling in a garret hoping their muse will bring fame and riches is not the reality for most. Even the most successful writers have to work at their craft, and all authors have the same difficulties getting words to flow. Why do they persist in what can be a difficult career? How do they persevere?

The candid answers appear in Why We Write: 20 Acclaimed Authors on How and Why They Do What They Do edited by Meredith Maran. She had the joyful task of choosing the 20 writers to interview for this collection and donates a portion of the book’s profits to 826 National, a nonprofit offering one-on-one writing and tutoring help at eight centers around the U.S., at which they help nearly 30,000 young people.

Some authors are surprised by their success while some are plagued by doubt or fear that a job at Home Depot is in their future. But all write because they want to be writers.

In the book’s interview with Sue Grafton, we learn she grew up with a dad who was a detective novelist. She became a successful author, working her way through an entire alphabet of mysteries, but was unable to quit her day job until her seventh book, G Is for Gumshoe.

As we read about these writers and their ways we understand as much about why they write as how they write. Many writers remain motivated when the work is good, but the ability to keep writing is daunting when deadlines loom. When writing isn’t going well fear and panic overtake thoughts of fame and profit.

Each chapter in Why We Write revolves around one author’s answers to the central question of why they chose this career and results in honest, sometimes surprising original responses.

Fans of the well-known writers included among the 20 authors will learn insider tricks, habits, and frustrations and get entertained along the way.

As Ms. Maran gets the authors to open up about their work, we learn what they do when the muse is “injured on the job:”

• Jennifer Egan (A Visit from the Goon Squad) speaks of the “fear a book will come and go without a whisper.”

• David Baldacci, author of at least 24 novels, notes: “If writing were illegal, I’d be in prison.”

Isabel Allende can only start a book on January 8, and she’s written over 30 books. “Can you imagine January 7? It’s hell,” she says. On January 8, as she first walks the 17 steps to her office to commence her next project, she finds herself scared, fearing she may have an idea that isn’t up to par. Yet after weeks of wasted time her muse finally shows up.

Readers of both fiction and nonfiction are drawn into the thoughts of these writers who create new worlds for us and who all share a need to tell a story. Readers working at becoming a writer or unsure whether to keep working on a manuscript can find inspiration in Why We Write.

On the subject of writer’s block, the authors describe it in personal terms.
“It’s like swallowing sand. It’s awful,” says Ms. Allende. Jodi Picoult counsels “You can always edit a bad page, but you can’t edit a blank page. “

Besides embracing the role of writer, these 20 have also had hard times, sadness, and loss, but writing sustains and rewards them.

In exposing these successful authors’ most private foibles, fears, and superstitions to bring the reader the full story of the ups and downs of a writer’s life and work, Ms. Maran bumps them gently off their pedestals where they reside with the rest of us.

As Meg Wolitzer (The Ten-Year Nap, The Uncoupling) states: “No one can take writing away from you, but no one can give it to you, either.”

Why We Write is an entertaining book for fans and writers of all levels.

Helen Gallagher is a national speaker on technology, writing, and publishing. She is the author of Release Your Writing: Book Publishing Your Way and Blog Power and Social Media Handbook, and a member of the American Society of Journalists & Authors, National Book Critics Circle, and Small Publishers’ Artists’ and Writers’ Network. She lives vicariously through fabulous fiction and thrives on well-written nonfiction.