Why We Write About Ourselves: Twenty Memoirists on Why They Expose Themselves (and Others) in the Name of Literature 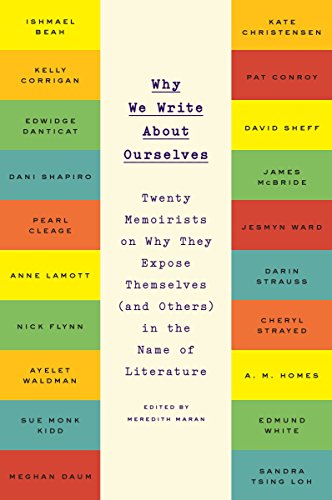 Editor Meredith Maran’s latest book, which follows her previous collection, Why We Write, gathers together the thoughts of Twenty Memoirists on Why They Expose Themselves (and Others) in the Name of Literature, her book’s rather wordy subtitle. Each of the selected authors, some more recognizable than others, have written at least one memoir, which they all admit can be challenging.

Among the stickier issues of the genre the writers address are whether or not memoirs must tell the whole truth and nothing but the truth, and where to draw the line regarding the feelings of other people who figure into an author’s truth-telling. For example, Dani Shapiro, says “the idea of truth in a memoir is absurd. Memory is utterly mutable, changeable and constantly in motion. You can’t fact-check memory.” But A. M. Homes, who calls herself a stickler for nonfiction to be truly nonfiction, thinks it’s not so hard to know what you remember.

On the issue of avoiding doing harm to others’ feelings, Pat Conroy says, “When it comes to memoir, I’ll always choose the writer over the person who suffers because of what’s written;” while Kelly Corrrigan shares, “I am a person first, writer second. I will not violate my relationships.” (Her point of view seems to represent a consensus.)

In her introduction, Maran writes that the authors she has selected “bare all about baring all, excavating the personal and professional agonies and ecstasies, moral conundrums, and psychological battles that come with the job.” Most of the writers included in the collection do their self-revelation and reflection in compelling and helpful ways, although a few ramble on somewhat narcissistically, which is not particularly helpful. It would have been useful, perhaps, to know how Maran chose the writers to include, some of whom she clearly knows personally.

For the most part, however, most writers, especially those who do write memoirs, will find the book makes a nice addition to their writer’s library, and writing teachers will find some helpful gems for discussing the kinds of issues Maran raises with her writers.

The book is structured nicely. Each chapter begins with a relevant quote, a brief background on the particular author, a text box on “The Vitals,” including “Notable Notes” about the writer, Facebook and Twitter handles, and the writer’s website. Another text box lists “Collected Works.” Then the writer shares thoughts on his or her personal experience as it relates to memoir, no doubt prompted by questions from Maran, who provides helpful headings to the text. Each author, whose entry begins with “Why I Write About Myself,” concludes with helpful tips in a final textbox titled “Wisdom for Memoir Writers.”

Occasionally a gem pops out in the tips or in the text that is useful for writers in any genre. For example, Dani Strauss’s tips about memoir writing include this: “Write the draft in the third person. That’ll make it easier to be tough on yourself, as you should be.” And Sue Monk Kidd offers this generic advice: “At its best, writing draws from the inner life, from a place deep within where we are sourced. We could call it the life of the soul. This place is filled with so much genius—an ordinary genius that is common to all of us. It’s the room where our dreams and imaginations live. It’s where our wisdom lies. . . . I see it as an inner reservoir. I think there’s even divinity in it.”

That kind of thinking alone makes the book a worthwhile addition to the writing canon.