Why Germany Nearly Won: A New History of the Second World War in Europe 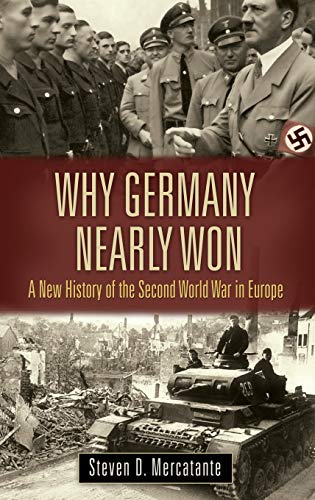 “Is it necessary to state positively that there is no logical connection between an author’s patriotism, or alleged lack of it, and his or her treatment of historical fact?

Is it not possible for a scholar to love his country, to value its military heroes, and to cherish the sacrifices made by others on his or her behalf, while at the same time holding fast to a commitment to historically accurate research and writing?

To what purpose do some writers of military history characterize others with a different view as little more than Nazi sympathizers?”

Judging solely on the basis of personal observation, in the area of military history the most popular and well published subject insofar as the American audience is concerned is the American Civil War, otherwise known as the War of the Rebellion.

This is most likely the result of two factors, the convenient presence of battlefields, and much more importantly, the visceral connection that the conflict still has with countless American families whose ancestors suffered through it and its aftermath.

The number of published works on the topic is prodigious, and seems to grow substantially each year, so that the gap between books on the American Civil War and those on other topics in military history seems likely to be a wide one.

If the War of the Rebellion is indeed the topic of greatest interest to aficionados of military history, its closest competitor is surely the Second World War. The gigantic scale of the Second World War, its dramatic sieges, lightning advances and grinding retreats, bravery and barbarity, and incomprehensible human and material wastage hold tremendous fascination for a generation of Americans which did not experience it, and which knows that a conventional war on such a scale has a very low probability of ever occurring again.

Why Germany Nearly Won: A New History of the Second World War in Europe by Steven D. Mercatante is the most recent effort by an American author to deal with the European aspect of the 20th century’s most tragic event.

As its subtitle suggests, the book’s author intended his work to constitute a “new history” of humanity’s greatest blood-letting. That the author saw fit to append such a subtitle to his work raises in the mind of the reader—as perhaps he intended it to do—why such a “new history” is called for, and what precisely is “new” about it.

Since the second of these questions more readily lends itself to investigation, it will be useful to consider it first. It appears that what Mr. Mercatante considers to be “new” about his history of the European theater of the Second World War is his thesis that “Germany came far closer to attaining hegemony over all of Europe than many have previously realized”; that “had Hitler been able to seize the bounty of economic resources accessibly found within . . . the Soviet Union, the Third Reich could have…proved undefeatable”; and that “Germany lost the war because . . . it failed to secure the economic resources needed to fight a long war” at a time when the qualitative superiority of its enemies had come into its ascendancy.

The underlying concept for all of the foregoing is the notion, expressly stated by Mr. Mercatante, that Adolf Hitler clearly recognized that without the Soviet Union’s “bounty of economic resources” he could not succeed in raising Germany to the level of a legitimate world power. Seen in this light, the Fuehrer’s decision to attack Soviet Russia in 1941, and to renew operations there in 1942, did not stem simply from his vainglory, but represented in a very real sense his only reasonable option for achieving his war aims.

The idea that Hitler recognized the need for greater economic resources in Germany’s war for European hegemony, and chose war on the Soviet Union in order to obtain those resources, is certainly “newer” than the long-prevailing view that the Fuehrer’s decision to attack the Soviet Union was ultimately fatal.

The concept itself, however, is not necessarily “new.” Stephen Fritz’s recent book Ostkrieg: Hitler’s War of Extermination in the East is grounded on this idea, as were still earlier works by Joel Hayward, Bernd Wegner, and Adam Tooze. The other aspects of Mr. Mercatante’s thesis—that Germany “came far closer” to winning the war, and that it could have been “undefeatable” if it had prevailed—are speculative and inconsistent with the reality of the German position in 1942 and thereafter.

If the “newness” of author Mercatante’s thesis is shaky, his explanation for why such a “new history” of the Second World War is warranted is still more so. The author states that his “new history” is necessary in order to dispel the myth that Germany was overcome by the “sheer numerical advantages possessed” by its enemies through showing that the Wehrmacht’s “own failings played perhaps a greater role in its defeat than the numerical strength of its foes.” And why is it important to establish these points?

According to Mr. Mercatante, taking account of the overwhelming numerical advantages in personnel and weaponry possessed by the Allies in their crusade against Nazism does “a tremendous disservice to the brave men and women who defeated the Third Reich” and, more importantly, enables “the continuing respect and adulation that some grant” the Wehrmacht and ignores its “central role in carrying out some of history’s most vile crimes against humanity.”

Mr. Mercatante’s arguments in support of the necessity for his “new history” of the Second World War are even more rickety than the notion that his thesis is “new.” The works of John Sloan Brown (1986), Keith Bonn and Michael Doubler (1994), and Peter Mansoor (1999) long predate Why Germany Nearly Won, yet express precisely the same core ideas.

Mr. Mercatante’s view, and that of his predecessors, is that any scholar who draws attention to the numerical and quantitative advantages enjoyed by the Allies in the Second World War, and in so doing points out the important role that those advantages provided to Germany’s enemies, is unpatriotic and perhaps even anti-American. Moreover, it is equally important to Mr. Mercatante and his precursors to suggest that such scholars are not only anti-American, but positively “pro-German,” even to the extent of being Nazi sympathizers as well, a point of view most comprehensively expressed in John Sloan Brown’s Draftee Division.

Is it necessary to state positively that there is no logical connection between an author’s patriotism, or alleged lack of it, and his or her treatment of historical fact?

Is it not possible for a scholar to love his country, to value its military heroes, and to cherish the sacrifices made by others on his or her behalf, while at the same time holding fast to a commitment to historically accurate research and writing?

To what purpose do some writers of military history characterize others with a different view as little more than Nazi sympathizers?