Why?: Explaining the Holocaust 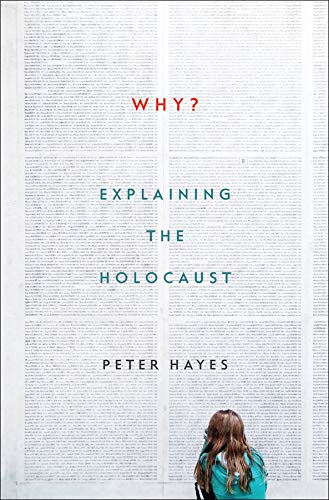 “Antisemitism did not bring Hitler to power; a pervasive national crisis and the machinations of self-interested conservative politicians did.”

“Hitler did not plan to murder the Jews from the day he took office; the decision to kill evolved as the Nazis gradually came to recognize a mathematical dilemma; they could not drive Jews out of German territory faster than its expansion encompassed more of them.”

Peter Hayes has been teaching the Holocaust to undergraduates and lecturing about the subject for more than 30 years. Hayes is the Theodore Zev Weiss Holocaust Educational Foundation Professor Emeritus of Holocaust Studies at Northwestern University and chair of the Academic Committee of the United States Holocaust Memorial Museum.

In Why? Explaining the Holocaust, author Peter Hayes dismantles conventional wisdom, disrupts pervasive misconceptions, and explains in detail how a volatile mix of complicity, fear, indifference, and greed paved the way for genocide. He produces compelling arguments against a series of commonly held beliefs about the Holocaust.

Why did Nazi Germany make Jews the targets of their aggression? Why did violence escalate into genocide? Why was the extermination of Jews so far-reaching and rapid? Why didn’t Jews fight back more often? Why was almost every other nation slow to respond to the mass murders and with such limited aid?

How much did Germans know about the genocide? Why did the vast majority of Europeans watch dispassionately as millions of Jewish families were uprooted, brutalized, made into slaves and finally exterminated?

Why does the world continue to exact genocide against millions of innocent people? Why would more genocide occur in Cambodia, Bosnia, Rwanda, and Darfur? Why do humans continue to murder simply because the person murdered was in some way different?

Professor Peter Hayes has produced a finely tuned depiction of why the Holocaust occurred, who was responsible, and why the nations of the world were so slow to respond to the Nazi genocide of the Jews of Europe. The Allies, including America, England, and Russia, pursued only military targets. When they could bomb a Nazi death camp, and stop the mass murder for a while, they refused. Why? Was Jewish blood that worthless to the Allied command?

Why? dispels many of the typical misunderstandings and misconceptions of the Holocaust. It delivers a fact-based presentation, backed by many useful references, into the Shoah. It answers many questions that have been ignored or incompletely explained. Author Hayes continues to ask the major questions. Why the Jews? Why the Germans? Why such a swift and comprehensive extermination of the Jews of Europe? Why didn’t more Jews fight back and more often? Why didn’t they receive more help?

Hayes brings to bear a vast archive of scholarly achievement, and he challenges some recent interpretations. He argues that there is no single theory of the Holocaust that explains everything. Instead, Hayes proffers that the convergence of disparate forces colliding at one particular moment in time to provide the foundation for the industrial genocide that we call the Holocaust.

Professor Hayes has produced an excellent explanation of why and how the Holocaust occurred, grounded in well-referenced and well-researched facts; it is concise and evocatively written. Why? can serve as a stand-alone textbook for an undergraduate history course, or for someone interested in acquiring additional depth in terms of Holocaust education. Its detailed, applied research serves to bolster and enhance many of the concepts that we already knew, while questioning a few others.

Hayes accesses compelling data and spot-on facts to explain the basics of why the Holocaust occurred. Visual learners would prefer the addition of a few more maps, diagrams, and pictures to aid in amassing the staid facts presented. Regardless, Hayes has produced a very viable text that reveals the major forces surrounding WWII and the Shoah. His insight and delivery is superb.

Why? is an outstanding book that will help anyone to better understand the meaning of the Holocaust and the many questions that surround it. We unfortunately live in an age when anti-Semitism, reactionary politics, and ultra-nationalist political activity is increasing, turning Jews into the mendacious threats that anti-Semites imagined in Europe 75 years ago. The hate is returning. More likely, it never left. The only difference today is that Muslims are now despised in addition to Jews. Somehow the white haters have forgotten that their ancestors were also immigrants.

A brief foray into Internet discussion groups will produce a litany of hate-filled posts aimed directly at Jews with lies, innuendo, and deceit. The need for a clear and cogent explanation of historical Holocaust facts is an absolute necessity to deter the increase in message board hatred against Jews and Muslims. Sadly, the chatter has increased. The threats have redoubled. More and more people find it appropriate to post hate-filled mendacious lies about Jews on the Internet and this never seems to slow down. This makes books like Why? Ever more necessary.

We live upon the cusp of another Holocaust. Dancing on the blade of a knife, society presents itself with profane, hate-filled lies against Jews and Muslims every day. No longer under the surface, reactionary and ultra-nationalist political parties are drawing more votes in Europe than ever before. Therefore, the time is right for a book that explains the result of anti-Semitism this clearly, concisely and adroitly. We should all hope for the day when such books are no longer necessary to our survival.