Why Businessmen Need Philosophy: The Capitalist's Guide to the Ideas Behind Ayn Rand's Atlas Shrugged 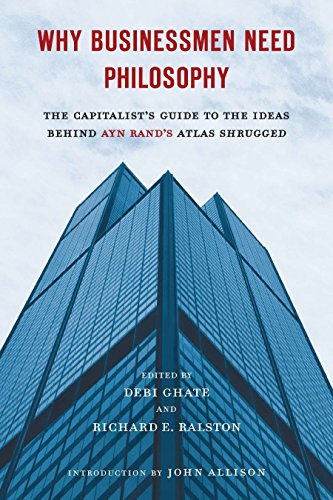 “Greed is good: Philosophy will help you to enjoy it without guilt.” Such might be the motto of Why Businessmen Need Philosophy, a compilation of essays dedicated to the thought of Ayn Rand. Rand’s philosophy is a celebration of selfishness and greed as creative forces, and each of these essays takes a different tack, but makes the same point.

Rand’s most famous disciple, former Federal Reserve Chairman Alan Greenspan, was roundly chastised for his link with the writer/philosopher during the Congressional Hearings that followed the financial crisis (although the politicians had little to say about it when times were good).

“Many young brainiacs of dorkish tendencies go through an Ayn Rand period (her books are very popular at Microsoft),” writes Michael Kinsley in a recent review of Greenspan’s autobiography in the New York Times.

This is true, but also unfair. Rand’s writing does have a kind of superficial attraction for young intellectuals, as it glorifies the role of people who think, create, and get things done. One has a tendency to magnify one’s importance when one is young—hence Rand seems to get her priorities right if you’re a young engineer, or an architect, and see yourself as indispensable to society.

But Rand, born Alisa Zinov'yevna Rosenbaum (no relation to this writer), and educated in Soviet Russia, has a more depth than that. Her so-called “Objectivist philosophy” is deeply opposed to altruism, and this cuts against a grain that runs very deep in our Judeo-Christian society. Socialism was, of course, her initial target, but Rand’s opposition to altruism is categorical, includes an attempt to change all we are taught about “helping others,” etc.
Put yourself first, says Rand, and you’ll serve the needs of society far better.

These essays, some of which are written by Rand herself, provide an excellent introduction to the best and most original aspects of Rand’s thought.

“You have no choice,” writes Rand, “about the necessity of integrating your observations, your experiences, and your knowledge into abstract ideas, i.e. into principles. Your only choice is whether these principles are true or false, whether they represent your conscious, rational convictions, or a grab-bag of notions snatched at random. . . .” This is hardly “philosophy,” in any real sense, but rather epigrammatic wisdom of the type Dr. Johnson espoused. “Clear your mind of cant,” said Johnson, and Rand’s prose helps one do just that.

One really thoughtful essay traces the origins of the idea of antitrust legislation, and tries to show how it went wrong. There is also a carefully documented history of how moneylending has suffered from moralists throughout the centuries. Another, by Rand herself, attacks the idea of compromise: “In any collaboration between two men (or groups) who hold different basic principles, it is the more evil or irrational one who wins.”

Some of the essays fall, sadly, into self-parody. Readers should avoid the essays about “Environmentalism,” whatever that may be. They contain the most basic sort of railing against “over-regulation;” ”The most beneficial projects, from housing developments to science observatories, are halted if there is any danger—if there is any allegation of danger—to some piddling species,” (some of us need to take science classes again. . . .). Another one complains bitterly about how businesses are forced to have compliance departments—as if anyone had the right to insist that corporations should have to comply with regulations!

But there is enough that is sublime in this book to outweigh that which is ridiculous. Rand hates guilt, and attacks it robustly whenever it appears. “Evil theories have to rely on evil means. Altruism and collectivism cannot appeal to human virtues; they have to appeal to human weaknesses. It is in the nature of altruists and collectivists that, the more they need a person or a group, the more they denounce their victims, induce guilt, and struggle never to let their victims acquire self-importance or self-esteem. . . .”

It is refreshing, after this long period in which bankers or capitalists have been blamed for the collapse of the financial system, and many of society’s ills, to take a dose of this unashamedly egotistical and self-glorifying rhetoric. Clears the mind of cant.