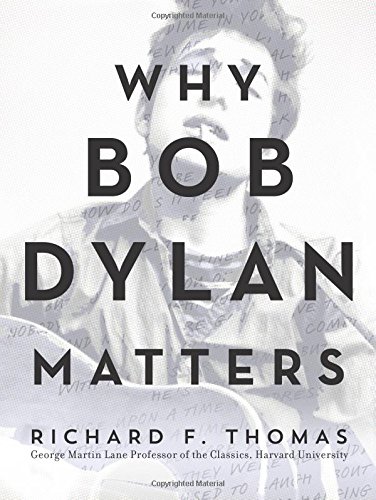 At first glance, the author and the subject of this book seem mismatched. Singer, songwriter, bard, and Nobel Prize winner, Bob Dylan, is the subject. Harvard Professor and classics scholar, Richard F. Thomas, is the author.

Professor Thomas certainly knows a lot about Greek and Roman poets and historians, including Virgil, Catullus, Ovid, and Thucydides. He also knows a lot about Dylan, whose songs he has heard over and over again for decades.

Thomas has two main points he wants to make. The first is that “Dylan is the supreme artist of the English language” in the second-half of the 20th century and the start of the 21st century. The second is that the ancient Greek and Roman poets influenced Dylan personally and that their work shaped his.

To make his case, Thomas provides information about Dylan’s life: the fact that he belonged to the Latin Club in his Minnesota high school; and that he visited Italy on several occasions. Thomas also offers, side by side, lines from Dylan and lines from Ovid’s work. Some of the phrases, such as “world’s end” and “cruel weapons,” are the same, though they’re also commonplace. “World’s end” doesn’t necessarily come from Ovid, either consciously or unconsciously.

Thomas wonders whether Dylan stole from Ovid and other ancient poets. He tries to answer his question with a quotation from T. S. Eliot who said: “Immature poets borrow; mature poets steal.”

Thomas argues that like Eliot, Dylan was a genius and that if he did steal material he transformed it into something new and original.

After all, serious scholars, such as Sean Wilentz, the author of Bob Dylan in America, have already offered strong and persuasive narratives that have placed the singer/songwriter and bard in the American grain.

No one’s more American than Dylan, unless it’s Duke Ellington, Stevie Wonder, or Patti Smith. There’s a long list and Dylan is part of it.

To say that he’s “the supreme artist” of our time, seems to belittle the achievement of other artists such as William Carlos Williams, Wallace Stevens, and Czeslaw Milosz, the Polish American writer who won the Nobel Prize in 1980, 36 years before Dylan, who didn’t go Stockholm to accept his award.

Thomas doesn’t engage in debate with the critics who have situated Dylan in the tradition of Woody Guthrie, Walt Whitman, and Allen Ginsberg. He mentions Dylan scholar Greil Marcus only in passing, and though he doesn’t discuss Sean Wilentz’s seminal work, Bob Dylan in America in the text, he does list it at the end of his bibliography.

Thomas recognizes that Dylan read a lot of American literature. He offers quotations in which Dylan mentions American books, including Uncle Tom’s Cabin and Ben-Hur, as well as American writers like Mark Twain.

But he minimizes their influence and impact on his lyrics. To make his case, he ignores a great deal. Indeed, he offers “no smoking gun” that might prove that Dylan was a contemporary classicist whose literary forefathers include Ovid and Virgil.

At times, Thomas also trivializes his own argument, as, for example, when he offers a quotation from Dylan himself who said, “I’m not about to go on and keep doing this—comparing my new work to my old work. It creates a kind of Achilles heel for myself.”

Surely hundreds if not thousands of humans, some of them artists and writers, have borrowed from Homer and have talked about their Achilles heel—their own vulnerability.

There’s no doubt that Frank has strong feelings for Dylan’s work. There’s also no doubt that he knows a great deal about Ovid, Virgil, and Catullus. Still, much of his argument seems misplaced. Bob Dylan matters. But probably not because there might, or might not, be echoes of Ovid and Catullus in his work.

Like Whitman and Ginsberg, Dylan matters because he heard America singing and because he sang American songs that carried around the world.

For decades, scholars like renowned Dylanologist Scott Warmuth have pointed out passages in Dylan that seem to be lifted from other writers, including Jack London, the author of The Call of the Wild and 50 or so other books, many of which Dylan read.

Scholars have spent their lives investigating the London/Dylan connection. They have also written about their findings, though Frank makes no mention of that work.

All too often, he uses phrases like “we can assume” and “Dylan here seems to be . . .” Frank’s tome would be a lot more convincing if he operated less in the realm of “seems” and “can assume” and more in the realm of statements such as “Bob Dylan read Ovid, underlined these passages, and wrote these comments in the margins.”

Great scholars, like Harvard professor F. O. Matthiessen, did precisely that kind of scholarship in American Renaissance, his masterpiece about the literature of the United States in the 1850s. Matthiessen read through Melville’s library, for example, and studied the comments he made in the margins.

Alas, Frank didn’t use Matthiessen’s work as a model.

Still if nothing else, Why Dylan Matters shows that Dylan’s work has appealed to almost everyone, including Harvard professors who teach Greek and Latin classics and who have offered seminars on the work of the man who wrote and sang such classics like “The Answer Is Blowing in the Wind.”

Sometimes literary influences are so big and yet so subtle that they’re blowing in the wind and can’t be nailed down.

Sometimes, too, one just wants to listen to Dylan perform “Subterranean Homesick Blues” and “Ballad of a Thin Man” in which he sings, “You are very well read” and adds, “But ya don’t know what it is/Do you, Mister Jones?” Criticism and interpretation have their limits.