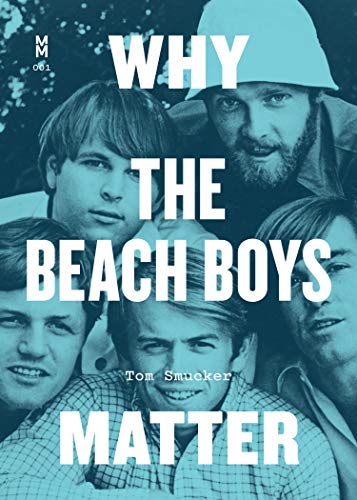 Smucker’s new book might not persuade teenagers today to listen to the “Boys,” as the author sometimes calls them. Then again it might turn them on to albums such as Surfin’ Safari, Surfin’ USA, Pet Sounds, and the boxed set Good Vibrations: Thirty Years of the Beach Boys.

What the book does do is to show why the Beach Boys matter to Tom Smucker, a long-time music and pop culture critic who wrote for The Village Voice and Creem and who has long belonged to the group of writers that includes Robert Christgau, Ellen Willis, and Greil Marcus.

There is a lot that’s good about this book, but it has one big drawback.

It does not have the lyrics to Beach Boys’ songs. That’s too bad. The reason: probably because the songs are copyrighted. To quote them would have cost a small fortune.

Another drawback to the book is that it doesn’t have enough about the girls that the Boys sang about in songs like “Surfer Girl,” “Barbara Ann” and “Fun, Fun, Fun” in which the protagonist drives her daddy’s “T-bird,” blasts the radio and goes as “as fast as she can.”

“Fun, Fun, Fun” is quintessential early Beach Boys in part because they get to be both bad boys and good boys. They celebrate defiance and freedom and then they get moralistic and sing, “You shouldn’t have lied.”

They wanted it both ways, which is in large part why so many of us did love them.

Smucker captures the ironies, complexities, and ambiguities of the Boys. He situates the band in the landscape and the culture of Southern California, which for a time seemed to be a quintessential American place, at least for white, affluent youth who wanted to party rather than try to integrate the segregated South and the segregated North, too.

Why the Beach Boys Matter has almost everything a reader could want to know about the band, including its individual members—the brothers Brian, Dennis, and Carl Wilson, their cousin Mike Love, and friend Al Jardine— their biographies, their studio work and their live concerts.

Smucker explores the Oedipal relationship between the boys and their father, Murry, who helped give birth to them in more ways than one, and who was their first manager, only to be discarded when they outgrew the space he had created for them.

Some of the conflicts with their father can be heard in “Fun, Fun, Fun” in which the girl runs off with the key to dad’s car and leads the guys who want to catch her “on a wild goose chase.”

Why the Beach Boys Matter looks at the boys musically, sociologically, psychologically, and in terms of race, class and gender. It adds to the already considerable literature about the band, including Timothy White’s The Nearest Faraway Place: Brian Wilson, the Beach Boys, and the Southern California Experience and Stephen Gaines’ Heroes and Villains: The True Story of the Beach Boys.

Smucker lambasts Gaines’ book because it has “too much emphasis on the scandalous detail.”

Still, those details are hard to avoid. In chapter 14, Smucker writes about Dennis Wilson, the drummer, the middle brother and the only real surfer in the family, who “got entangled with Charles Manson . . . did drugs with Brian, slept with Mike’s wife . . . and drowned at age thirty-nine.”

And that’s only part of the story of a life that veered from creative self-expression to crazy self-destruction.

Smucker calls Charles Manson “Abbie Hoffman’s doppelganger,” but maybe his real doppelganger and twin was Dennis, whose death revealed the dark side of the California Dream, which has been in many ways the American Dream writ large.

For survivors of The Sixties and for members of other generations who look back at the era either with nostalgia and regret or with fear and loathing, the real value of this book might well be its reflections on the era of Vietnam, civil rights, the counterculture, the mindlessness of suburbia and a nation in which, from the White House to the house next door, “no one’s in charge, and everyone can do their own thing” which allows for both “positive” and “negative” space.

Smucker is terrific when he riffs on the 1960s and their aftermath. He’s interesting when he writes about himself as a young hippie and as a budding rock journalist who followed the Boys closely in 1972 and wrote about them for Creem.

In fact, Smucker might have started this book at that point, and not saved it for near the end.

In the next to the last chapter, he writes that, “The Beach Boys were never America’s Band—that’s reaching too far. But their struggle to have a story and make a space for their story is itself one of those great American stories, and that’s good enough.”

One wonders what Smucker means when he uses the word “great,” and what constitutes a “great American” story. No doubt, the Beach Boys told captivating stories, but then along came the Beatles, the Stones, The Who, The Kinks, Joe Cocker and Van Morrison.

By the end of the 1960s, Brits and the Irish were telling the kind of stories that Americans wanted to hear. One wonders why that happened. It wasn’t just PR and advertising. It had something to do with the zeitgeist that captured the Boys and then dropped them.

Smucker makes it clear that the Beach Boys went on after the 1960s ended, and that they did creative work afterward. And yet they seem to belong forever to southern California in the early 1960s.

If we're boomers, they’re part of our youth, and part of Tom Smucker’s youth, too. They’re worth listening to again for their sheer energy, enthusiasm and sass. Their songs make you want to move.

Why the Beach Boys Matter provides an excellent introduction to the band that might have evolved, Smucker suggests, into the Beatles. He adds, “There couldn’t have been an American Beatles.” And yet the Liverpool born and bred band had grown up on American music, American rhythm-and-blues and rock ’n’ roll. They were as much of an American, as an English band. No wonder they took the U.S.A. by storm. We had been waiting for them for years. We were ready to abandon the Beach Boys. Now, with Smucker’s book, we can reconnect to them.