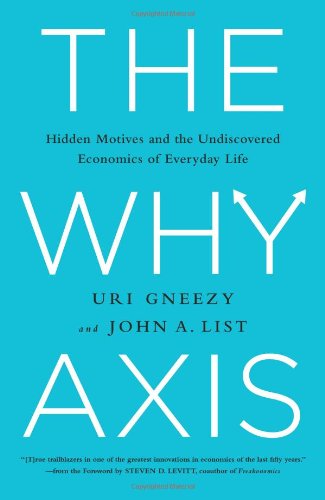 “Until one understands what incentives motive people, it is impossible to predict how new policies will actually work.”

Neuroecomonics—the combination of economics, neuroscience, and psychology employed to determine how individuals make economic decisions—is the rage these days. This kind of study originally began in the lab scrutinizing gambling strategies and was thus limited by artificial constraints.

The claim the authors make is that they have moved the science out of the lab and into the wide world, into large-scale field experiments that look at people in naturally occurring environments. “In the wild” is how they term it.

The authors boast, “This research will change both the way we think about and take action on big and little problems.” That, however, is an enormous assumption even as the authors aim to reveal, “What really works in addressing big social, business, and economic problems,” and to offer a “new understanding of the motives underlying human behavior.”

This burden the authors do not meet, which is not to say that their book isn’t without merit. Their core question is, “What motivates people, and why?” The fact that they never quite find out isn’t a fatal flaw, because along the way we get to see the enormous complexity and counterintuitive forces that shape a given person’s decisions and desires.

They question things such as expensive, faddish education programs and ask point blank whether they make any difference at all (the answer is no).

The authors seek to understand “what kinds of incentives” cause individuals to do the socially altruistic thing. For instance, when it comes to environmentally green behavior people respond to peer pressure—being told that other hotel guests choose to reuse their towels—much more readily than they do to direct appeals for environmental stewardship.

If you are like most people then you have an opinion about why people you disagree with do the things they do—political opposites are the prime example—and yet the authors challenge readers, “Do you really know why?”

Their overall aim is to determine what people really value. Once the answer is in hand they can presumably predict why people want what they want and behave in the otherwise inexplicable ways that they do.

At bottom, what these authors teach us is that hidden motives are incredibly complex and do not operate in the way we expect them to. “Until one fully understands what incentives motive people,” they suggest, “it is impossible to predict how new policies, or changes, will actually work.”

No one could argue with that point of view.