The Whole-Body Microbiome: How to Harness Microbes―Inside and Out―for Lifelong Health 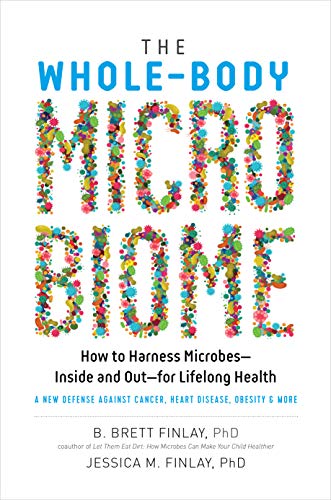 “This is really a book about healthy ageing from the authors’ highly particular perspective—and it turns out that the fountain of youth is full of germs.”

Most people know the word “microbiome” in reference to the bacteria colonies in our guts. While nearly all the attention about beneficial organisms has been given to this throng, “there are microbes all over, inside, and around our bodies.” So explain Brett and Jessica Finlay, a father–daughter scientific team. He is a biotech founder and Professor of Microbiology at the University of British Columbia, and she holds a doctorate in gerontology, the science of ageing.

The Whole–Body Microbiome is about more than our inner ecosystem or how to lose weight by fiddling with it (although the book touches on this, too). No, it is really a book about healthy ageing from the authors’ highly particular perspective—and it turns out that the fountain of youth is full of germs.

Microbes have been around for 3.5 billion years ,whereas our modern habit has been to attack and eliminate them “rather than learn more about them and live in harmony, as we had for most of history.” The average American in 1900 lived to the age of 47, whereas today’s average life expectancy is about 79 years. Most of the additional 30-year lifespan has been due to infection prevention.

Only a small fraction of the microbes we encounter are hazardous. Many are beneficial. “Disinfecting a toilet bowl,” for example, “is an exercise in futility . . .  Your cell phone is 10 times dirtier than a toilet seat. They are large reservoirs for bacteria, and the more microbes they collect, the more that wind up on your hands, face, and everywhere else.” Our hands, it seems, are the biggest culprit when it comes to depositing microbes on phone surfaces.

Antimicrobial products prey upon consumer fears—every year at least two million Americans are infected with antibiotic–resistant bacteria; at least 23,000 people die each year from such infections. But using household disinfectants only makes the problem of drug resistance worse while doing little good in the way of germ removal. Clorox wipes require using enough of them so that “surfaces remain visibly wet for an entire four minutes.” The authors assure readers that the better way to remove germs is “proper handwashing technique with regular soap.”

The Doctors Finlay spend a fair portion of the book on the gut–brain axis. Linking diet with health goes back more than a century to the Reverend Sylvester Graham and his eponymous crackers, Dr. John Harvey Kellogg (a Seventh–Day Adventist) and his flaked cereals in a box, and C. W. Post’s Grape–Nuts cereal, originally sold as a preventative for appendicitis, and his coffee replacement, Postum.

The emphasis on what the individual can do for themselves has been a powerful influence. It has led to two things: a belief that the body requires constant surveillance or else is on the brink of disintegration, and that good health is a state beyond normal health. The “whole biome” authors recommend their MIND diet (Mediterranean Intervention for Neurodegenerative Delay), promoting it in particular as a way to prevent Alzheimer’s disease. But like most diets, it is one of restriction, which surely will restrict its ease of use and appeal.

We know that the gut microbiome plays a major role in determining body weight. But the authors go further in claiming that it regulates metabolic rate and the number of calories produced from a given food. Also, “eating less is much more effective than exercise if one wants to lose weight.”

Because diet strongly influences the composition of our gut microbes, “we may be able to use personally microbe-attuned diets for more effective weight loss in the future.” Critical reviews of commercial companies that can provide analyses of one’s gut flora are paired with warnings against YouTube videos featuring “brown mixes and blenders” that encourage DIY fecal transplants. Stool transplants aren’t a modern invention, they tell readers, but date back to fourth century China.

The book includes a tour of microbes in the skin, the brain, the mouth, the lungs, the heart, the genitals, and more. Many assertions come as a surprise. Skin microbes, for example, are “critical, and most often positive . . . They reduce wrinkles, dryness, sun damage, acne, and even body odor.” Brushing your teeth “promotes health throughout your entire body, including protecting against heart disease and dementia.” Even further, “microbes synthesize neurotransmitters and hormones and influence the immune system.” Claims like these are outside the mainstream. Others, such as “luckily, Parkinson’s is a slow-acting disease,” are manifestly untrue.

The book’s problem is its singlemindedness. Everything related to health and wellbeing, including mood and depression, becomes reduced to what microbes are doing in the gut and elsewhere in the body. The authors even manage to link them to our circadian rhythms and jet lag. Readers may want to take what they say with a grain of salt.