The Whole Art of Detection: Lost Mysteries of Sherlock Holmes 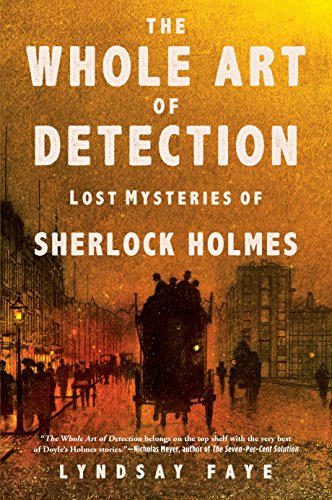 On many levels, particularly due to Sherlock Holmes’ staying power and apparently endless popularity, it is hard to disagree.

Sherlock Holmes is the most portrayed movie character in history (according to Guinness World Records) and there have been so many imitators of Conan Doyle’s rich storyline and fine prose that “Sherlock Holmes Pastiches” has its own Wikipedia page. (And it’s a long one.)

On the same podcast, Sims, the author of Arthur and Sherlock, Conan Doyle and the Creation of Holmes, detailed all the elements that make Conan Doyle’s works so compelling.

Atmosphere and mood. Action and dialogue. Fast-moving observations. Brilliant character studies. Holmes’ wry humor. Telling details. Dr. John Watson’s critical perspective as a (our) voice of reason and skepticism about all that unfolds in his (our) presence. And, of course, excellent clue-finding.

So who is up to the challenge of writing within such a precise, particular framework? Well, Lyndsay Faye for one. Her earlier full-length novel Dust and Shadow (2009) put Holmes on the trail of Jack the Ripper and was widely praised. In addition, Faye has been publishing short stories featuring Holmes in Strand Magazine and other publications for many years. The Whole Art of Detection gathers those short stories in one volume and adds two new entries.

And, once again, Sherlock Holmes walks right off the page.

Many other writers have taken the Sherlock Holmes legend and treated it like taffy to be stretched and twisted and chewed nearly to the point of being unrecognizable. Faye sticks close to the source material, going note-for-note with Sims’ worthy checklist, but hardly makes it seem like a paint-by-numbers affair.

Faye’s prose seduces readers with familiar cadence and beautiful imagery, all while briskly unraveling story after story with clever plots and colorful characters.

The 15 stories are divided into four groups—Before Baker Street, The Early Years, The Return, and The Later Years—so the collection spans much of the arc that Conan Doyle laid out, from about 1880 to 1914. Two of the 15 stories are notes-form diary entries, one from Watson and one from Holmes.

The Conan-Doyle touch is in full bloom in The Whole Art of Detection. Faye has a true gift for style and a fun eye for story. She brings Holmes a suspicious husband, a deranged opera singer (who makes a stunning entrance), a taxidermist and others. We see Holmes deduce and detect just as we want, drawing on all his powers of observation from trace evidence to body language. Holmes is always ahead of Watson and always ahead of us, spotting things we could have seen but overlooked.

But Faye also draws out the relationship between Watson and Holmes, most particularly diving into Holmes’ thoughts about Watson in the “Memoranda Upon the Gaskell Blackmailing Dilemma.” Both Holmes and Watson are fully three-dimensional and fully realized here. Fans enjoy the Holmes-Watson relationship as much as the puzzle work—and Faye delivers plenty of emotional content, too.

From “The Adventure of the Honest Wife:”

“Sparrows twittered on the dawn-illumined branches, and the sun gleamed in the vanishing puddles like the shards of a shattered decanter, but I could take no joy in these harbingers of finer weather—not when I pictured Mrs. Treadwell (a wisp-thin, ethereal creature in my imagination) donning an ornate diamond collar which bled poison in her cobalt veins, slowly destroying her.”

From “The Adventure of Momento Mori:”

“A grim smile flashed to life upon Holmes’s narrow features as he darted out the door, and I reflected whilst flipping through my Bradshaw upon his curious propensity for sudden disappearances. As a precaution, one I had more than once proven grateful for in times of direst need, I slid my service revolver into my pocket. Its weight, even if the weapon was never called upon, would provide a certain degree of familiar reassurance.”

Faye’s 2012 The Gods of Gotham was a finalist for an Edgar Award (as Best Novel) and her 2016 novel Jane Steele is among the final five for the same award this year. It’s hard to imagine Lyndsay Faye won’t be back again next year for a third nomination.