Who Shot Sports: A Photographic History, 1843 to the Present 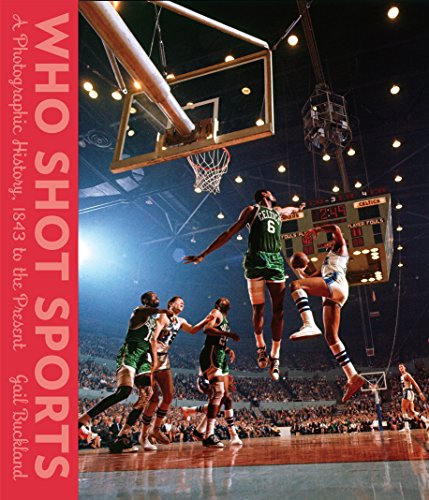 Who Shot Sports is an engrossing photo exhibition between covers that more than proves the truism that a picture is, indeed, worth a thousand words. But if you can tear yourself away from its thrilling images, Gail Buckland’s text is fascinating and fun. She annotates with the stories about the athletes and their indelible moments captured in the images, but also focuses on the unsung heroes behind the cameras.

Buckland takes us around the world and back again from pick-up street games in of poor kids in Cuba during the ’70s, to the highest football field in the Swiss Alps, to the depths of Hawaii’s Shark’s cove, to Rocky Graziano in the gym shower, looking over his shoulder with a lethal gaze at the photographer Stanley Kubrick’s lens.

Almost from the beginning of the development of moveable cameras, sports photographers all caught the bug of photographing humans in engaged in sport and turned it into a populous art form—sports photography has always sold papers, magazines, and in the case of Sports Illustrated, created an industry and populous art.

Some of the photographers came from art schools, some were studio and fashion genres, some news photojournalists who gravitated to sports, and many photographers were self-taught and forged careers on their own.

Self-taught photographer Martin Munkacsi in the 1920s published his pics in the 1920s Berliner Illustrirte Zetung and is cited by Henri Cartier-Bresson as being as influential to him as an artist it “. . . made me suddenly realize that photography could reach eternity through the moment. . . .” wrote Cartier-Bresson.

Photographer Roger Riger "defined the true character of the action and the sensitivity of the athlete.”   According to Hugh Edwards, curator of photography at the Art Institute of Chicago, citing Riger's aesthetic in defining “the completed gesture . . . .something we believed possible only in the hands of geniuses of daughtsmanship like Gericault and Degas . . . in some inexplicable way . . . suggest what comes before and after each flash of movement.”

The photos that Buckland chooses for the book instantly draw you into the worlds of football, auto-racing, surfing, basketball, soccer, baseball, football, soccer, fencing, diving, track and field, tennis, golf, swimming, skiing, boxing, extreme sports, and, of course, the Olympics at a time when the more intimate relationships between the photographers and athletes is being cut off by the corporate mentality of today’s pro sports.

The photo spreads included some of the most of historic moments in sports: Neil Leifer’s 1965 shot of Mohammed Ali standing over Sonny Liston after a knockdown, for instance, and the moment Greg Louganis hit the edge of the diving board that the Olympics—just to mention two. And Buckland includes plenty of celebrity pics of such superstars as Serena Williams, Magic Johnson, Derek Jeter, Roger Federer, and past luminaries like Joe Louis, Jesse Owens, Jackie Robinson, Willie Mays, among many others. This photo book is mostly filled with photos that are not so famous, but that are often even more compelling.

Similarly, as fun as it is to relive some of sport’s most incredible moments and see star athletes in action,  Buckland’s focus on the community of sports is beyond fame, money, or glory. An inspiring example is Jan Grarup’s inspiring shots of women in Mogadishu, literally risking their lives to play basketball, which is banned in their country. “Every time they show up at the bullet-riddled court situated in the ruins of the city, armed guards at the ready, they risk their lives. Basketball is the sport of the “deadly enemy America.” But these young women are fearless. At the All Arab Games at Qatar, they won many of their games. And they believe, unlike the dominate male authorities, “that sports can play a role in the struggle for peace.”

Buckland’s knowledge of the history, camera equipment, and photographers is comprehensive. She gives thrilling accounts of the lengths that photographers go through to get the shots they want—many times as physically daring as the athletes they are shooting. The text jumps from one photographer to the next and is a bit jarring, but Buckland succeeds at illuminating the wide world of photosport journalism.