Who Killed Berta Caceres?: Dams, Death Squads, and an Indigenous Defender's Battle for the Planet 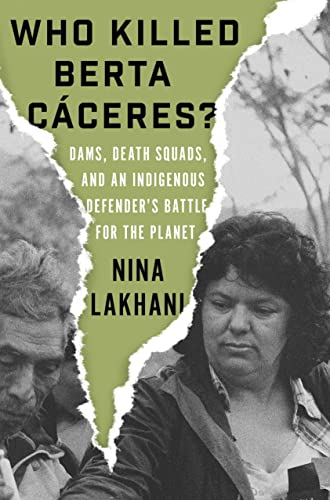 When Berta Cáceres was assassinated in her home in the middle of the night on March 2, 2016, it was a major international news story, as coverage of Honduras goes. While shocking, it was not a surprise to anyone closely following Cáceres’ struggle or that of her organization, COPINH, and her community in opposing the planned construction of the Agua Zarca hydroelectric dam projects on the Gualcarque River. As leader of the Council of Popular and Indigenous Organizations of Honduras (COPINH) and perhaps Honduras’ most prominent environmentalist and Indigenous land defender, Cáceres had been harassed for years by proponents of the dam projects and their cronies in local and federal government.

This persecution, and other earlier repression against COPINH and Indigenous Lenca environmental defenders, hadn’t received as much international attention. Nina Lakhani, writing in The Guardian, was one of the few English-language journalists working for a major news outlet who did report on it. In the months and then years after the murder, international media attention again largely moved on, even as arrests were made and the trial eventually got underway. But Lakhani was there, “the only foreign journalist present at the trial,” Foreign Policy notes.

Lakhani’s new book, Who Killed Berta Cáceres: Dams, Death Squads, and an Indigenous Defender’s Battle for the Planet, published by Verso Books, is the first book in English to examine what is known about the murder, and the first such volume about Cáceres herself.

Cáceres was a committed, unwavering, and indefatigable revolutionary from an early age, assisting armed resistance to the brutal US-backed far-right government in neighboring El Salvador in the 1980s. It was, ironically, this experience that led Cáceres and her comrade, lover, and later COPINH co-founder, Salvador Zúñiga, to choose a model of nonviolent resistance to resource extraction and environmental degradation back home in Honduras.

The 1994 Zapatista uprising in Mexico was another inspiration; like many of the Zapatista commanders and Salvadoran guerrillas, Cáceres saw her gender as a strength: “. . . over time her confidence and standing increased as her vision and analysis evolved. She came to understand capitalism as not only an economic model, but also a patriarchal one, which dominated women in different ways,” Lakhani writes.

Cáceres and Zúñiga founded COPINH in the mid-1990s to confront the extractivist projects that would otherwise plunder sacred and precious natural resources from traditional Lenca territories. Who Killed Berta Cáceres presents a brief history of Honduras focused on the period overlapping with Cáceres’ life as an activist: the 1980s to the mid-2010s, and Lakhani demonstrates how these projects flowed from Honduras’ role as launching pad for US interventions in Central America, concurrent with the era of neoliberal hegemony.

Cáceres and her compatriots opposed the development schemes not just on the ground, where they marched and set up roadblocks to block trucks and earth-moving equipment, but outside the doors of the World Bank and Inter-American Development Bank in Washington, DC, and protesting negotiations for the Free Trade Area of the Americas in Quebec City in the early 2000s. Berta investigated the role of international and Honduran capital―including “dirty money”―invested at the expense of local communities. This is what she was doing when she was killed: “If she could connect the dots, Berta told several confidants, she was going to pass the information to US prosecutors in the hope they would probe further,” Lakhani writes.

The more recent dams planned for the Gualcarque River, which led to Cáceres’ assassination, exemplify Washington’s role in determining much of what happens in Honduras. Some funding for the ventures originally came from the World Bank’s International Finance Corporation, and the projects’ initiation was facilitated by the 2009 coup d’etat against Honduras’ democratically elected government.

Cáceres opposed both these modes of US interference: the US Treasury maintains veto power at the Bank, and, as former secretary of state Hillary Clinton explained candidly in her 2014 memoir, Hard Choices, the US ensured that elections could take place before the ousted president, Manuel Zelaya, was restored to office. This enabled the coup to succeed by blocking international pressure that would have overturned it and would have allowed the elected government to oversee the scheduled November 2009 elections. Instead, those elections were held under the coup regime, amid clouds of tear gas, shut-down media outlets, and other police repression.

Cáceres became one of the most prominent opponents of the coup. Meanwhile, the interests of golpistas in Honduras’ elite families and those of international finance capital continued to converge. Lakhani makes a convincing case that being able to pursue such capitalist exploitation unhindered by concern for local communities or for the environment was a powerful motive for the coup in response to a Zelaya administration that had been offering too many concessions to low-income workers and campesinos for elites to be happy with.

The coup also paved the way for Cáceres’ murder. The post-coup governments of Porfirio Lobo and then Juan Orlando Hernández have been marked by impunity for murders, disappearances, and death squads, and by corruption and collapsed institutions―all with unwavering US support.

Murders of coup opponents began just after Zelaya’s ouster; soon Honduras achieved notoriety for the high numbers of killings of various minority groups (women, LGBT, Afro-Hondurans, Indigenous), and anyone who might provide a check on state power (journalists, lawyers, judges, environmentalists, and human rights defenders). Cáceres’s assassination was the latest in a long list (indeed, Cáceres’s name had been on a Honduran military hit list, as Lakhani laterexposed inte the Guardian), but was still alarming because Cáceres was the highest profile target yet; it showed that if they could kill her, they could kill anyone.

The US embassy in Tegucigalpa, as Lakhani shows, had further endangered Cáceres by condemning her actions, and those of COPINH, in blocking the Agua Zarca projects. This followed from an older US preoccupation with COPINH, which the US embassy in Tegucigalpa described in multiple cables, published by WikiLeaks, as one of the “most fervent anti-U.S. groups” in Honduras.

The US government has continued to signal which side it’s on in the ongoing community struggles against the dam projects and in the lingering injustices surrounding Cáceres’ murder. The investigation and trial were marked by numerous irregularities, which included sidelining Cáceres’ family and their lawyers and preventing them from accessing crucial evidence retrieved from cell phones and computers seized from the suspects.

Lakhani notes, and Cáceres’ family (including, notably, her daughters who carry on her legacy in leading COPINH) continue to decry that the intellectual authors of the assassination have yet to be brought to justice. The US government could insist that this happen; it could pressure Honduran authorities to find and arrest them, but it has not done this.

A thorough, independent, and incorruptible investigation would be needed to determine who all was involved in Cáceres’ murder, but this is all but impossible in Honduras where institutions have collapsed, impunity is rampant, and corruption taints law enforcement at all levels.

Who Killed Berta Cáceres provides an important and accessible overview of the crime and the case, and offers a useful primer on recent Honduran history (all the better in conjunction with other post-coup texts, such as Dana Frank’s Long Honduran Night: Resistance, Terror, and the United States in the Aftermath of the Coup, 2018 from Haymarket Books).

Ultimately, it’s a tale of injustice; a familiar story of exploitation, resistance, repression, solidarity, terror, and more resistance. It’s an examination at the micro-level of how imperialism and neoliberal development function, and how dismantling these systems requires action by us, here in the “belly of the beast” as well as “there,” on the ground.

Dan Beeton is Director of International Communications at the Center for Economic and Policy Research and has worked on international policy issues for more than 15 years. His writings on Latin America, Haiti, trade, and other topics have appeared in the Los Angeles Times, Al Jazeera America, Third World Quarterly, InsideSources, NACLA, Jacobin, and other publications.