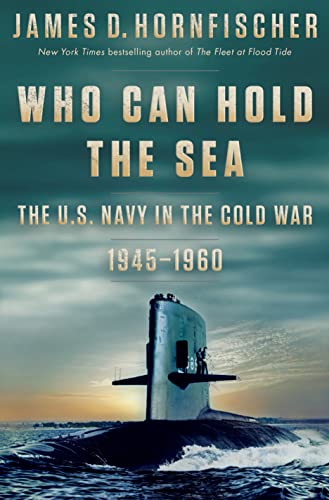 James D. Hornfischer’s final book, completed shortly before his untimely death in 2021, is a perfect capstone to his award-winning career as a naval historian. Covering the often-overlooked era from the end of World War II to right before the Kennedy presidency and the height of the Cold War, this time was critical to our nation’s Navy and Marine Corps.

The U.S. Navy reached the zenith of power in 1945, achieving global maritime dominance and far surpassing its nearest ally, Great Britain. However, almost as soon as World War II ended, the Navy found itself facing new challenges both overseas and at home as the United States moved to quickly demobilize its wartime military and return to peace. The mighty fleet almost disappeared by early 1947 when the specter of the Soviet Union started to arise in Europe. The Navy quickly found itself performing forward deployments to show the flag and reassure European nations still reeling from the destruction of World War II that the United States would stand by them as the Soviets installed puppet governments throughout Eastern Europe and supported a communist insurgency in Greece.

As it began to resume its primary mission of keeping the oceans open for commerce and showing the flag, the Navy faced some of its greatest challenges not from the emerging Cold War standoff with the Soviet Union, but in the halls of Washington, DC, during the bureaucratic battles over the formation of the new Department of Defense and the integration of atomic weapons into the U.S. defense arsenal and planning.

The struggle between the Army, Navy, and new independent Air Force, leading to the famous “Revolt of the Admirals” would be fierce and unrelenting as each service tried to define its role in a world where the whole notion of warfare was being changed by atomic weapons. The story of James Forrestal, the first Secretary of Defense, is not well known to most Americans, particularly his critical contribution to what would become America’s policy of the containment of communism and Hornfischer draws a sympathetic portrait of this brilliant but tortured man who was mainly responsible for much of America’s current national security bureaucracy.

The arguments about atomic weapons took on a more critical note when the Soviet Union tested its own bomb in 1949 and the new war in Korea brought the Navy back to the forefront of what would become limited warfare under the shadow of nuclear annihilation. Covering the Korean War in several magnificent chapters, Hornfischer not only tells the heroic tale of the 1st Marine Division fighting its way out of the Chosen Reservoir, but he almost creates adventure tales of the heroism of Navy frogmen conducting sabotage missions and the heavy involvement of Navy and Marine airmen in conducting crucial air support missions to troops on the ground.

Finally, no history of this era would be complete without the story of the new technologies that shaped the Navy. The first is, of course, nuclear power and the story of the irascible genius Hyman Rickover, the father of the Nuclear Navy and a controversial fixture in the Pentagon of nearly 40 years. His unrelenting drive to place a nuclear reactor inside a submarine creates the first truly underwater weapon system able to remain submerged nearly indefinitely, leading to the first crossing of the polar ice cap by a submarine and the eventual merger of the nuclear submarine and nuclear-armed ballistic missiles. The creation of the Polaris missile program, truly an innovative system built on time and within budget, is one of the great and relatively unknown successes of the Navy during this era, yielding a nearly invulnerable nuclear deterrent system and forming a crucial part of what would become America’s nuclear triad.

But the more fascinating story is the tale of the Sidewinder missile, a truly pioneering air-to-air weapon that inaugurated a new era in air combat as high-performance jet fighters started to use missile weapons against their opponents, leading to more sophisticated air-to-air missile and aircraft systems through the 1960s. But the Sidewinder, still in production today, was the first truly mass-produced missile weapon that was quickly proven in air combat above the Straits of Taiwan during numerous skirmishes between Nationalist and Communist forces in the late 1950s.

Unfortunately, the book ends rather inconclusively, leading the reader desolate to know that no doubt Hornfischer, if a brain tumor had not cut his life short, would have written another marvelous trilogy about the Navy during the Cold War, an era ready for thoughtful narrative history. Nonetheless, it is a spellbinding work that will serve James D. Hornfischer’s legacy well.