White Too Long: The Legacy of White Supremacy in American Christianity 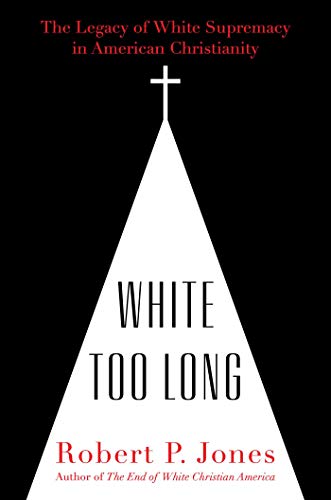 With November’s presidential election fast approaching, much attention is being given to white evangelical voters, the bedrock of Donald Trump’s electoral base—more so now, with the racial debate that was sparked by the killing of George Floyd and the Black Lives Matter movement.

So the timing is ideal for Robert P. Jones’ White Too Long: The Legacy of White Supremacy in American Christianity, the latest in an apparently unending stream of books this season on this subject.

Jones is a Washington, D.C.-based pollster, in the survey business since 2009. But his Public Religion Research Institute (PRRI) has already established a reputation for incisive insights into the intersection of faith and politics.

Unlike some of the recent white evangelical entries, this is not written by an outsider.

Jones, also the author of The End of White Christian America, is a bona fide insider, born and bred. He was raised in a white evangelical home in Jackson, MS,  educated in local public schools, attended church services five days a week and graduated from the same, small, local, Baptist Mississippi College as his parents and brother. After graduation, he earned a masters degree from his denomination's Southwestern Baptist Theological Seminary, as well as earning a PhD in religious studies from Emory University.

So this is a damning, categorical indictment, and a deeply personal one, written by a native, southern son. It is an angry book, to be sure, but the indignation is righteous, justified, and in a good cause.

At the core of Jones’ new book is telling the painful truth that racism and white supremacy are an essential, ongoing element—if not the predominant ideology—of grassroots, white evangelicalism, both historical and contemporary.

“If we are going to understand the surging currents of racism, anti-Semitism, Islamophobia, and our increasingly tribalistic politics in what the Southern-born writer Flannery O'Connor dubbed our 'Christ-haunted' land," he writes, "we have to start here at its genesis.”

Or, as Jones writes in the first sentence of the Introduction:

“The Christian denomination in which I grew up was founded on the proposition that chattel slavery could flourish alongside the gospel of Jesus Christ. Its founders believed that this arrangement was not only possible but also divinely mandated.”

Then, after the Civil War, religion "sacralized white supremacy [allowing] the Southern Baptist Convention to spread its roots during the late nineteenth century to dominate southern culture . . . setting the tone for American Christianity overall and Christianity's influence in public life."

Jones writes of the gruesome lynching of an African American man, Thomas Wilkes, in Georgia in 1899. He cites W. E. B. Dubois' observation of the event, which illustrated that “the psyches of many white Christians, who saw no conflict with attending a lynching on the way back from church, and the most respected white civic and religious leaders who either looked the other way or actively aided the murder.”

Jones points out the uncomfortable truth, based on both historical and his PRRI research, that these racist attitudes are not confined to Southern Baptists, or white evangelicals, many but not all in the Deep South, who supported slavery and segregation.

"One does not need to cast too far about to see similar actions and shared convictions in white mainline Protestant and white Catholic churches well beyond the former states of the Confederacy," he writes.

A majority of all these groups voted for Donald Trump in 2016.

Jones weaves memoir, much of it confessional, through the narrative. He is grateful for being raised in a nonracist, working class home, the son of two first generation college graduates. Attending newly integrated public elementary and high schools in Jackson, MS, in the mid-1970s, he recalls seeing robed Klansmen fundraising at school athletic events that included integrated teams. But his church youth group remained integrated.

And yet, he acknowledges, "Growing up inside Baptist churches in Texas and Mississippi, I never once wrestled seriously with our denomination's troubled racist past."

Later, he explains, “In retrospect, the most remarkable thing about my growing up in the Deep South is how massive contradictions somehow evaded serious moral or religious interrogation.”

And even later, “As I’ve moved through the process of writing this book . . . I’ve been astonished by how ubiquitous the claims of white supremacy have been on my life.”

For example, his research revealed that, although of modest means, his farming ancestors owned four African American women as household slaves.

Jones gives credit where it is due, to courageous, contrarian United Methodist ministers in Jackson who resigned their prestigious pulpits in the 1960s rather than preside over a segregated sanctuary.

(Jones might also have included among his heroes equally courageous lay leaders like the University of North Carolina's Coach Dean Smith, whose anti-racist anti-homophobic stance got his Binkley Baptist Church in Chapel Hill thrown out of the Southern Baptist Convention in 1992.)

Jones also includes tales of modern reconciliation in faith communities from the Deep South to the Upper Midwest.

As well as a searing indictment, White Too Long is a passionate call to action.

“This book puts forward a simple proposition: it is time—indeed, well beyond time—for white Christians in the United States to reckon with the racism of our past and the willful amnesia of our present. . . . White Christian churches have not just been complacent; they have not only been complicit; rather, as the dominant cultural power in America, they have been responsible for constructing and sustaining a project to protect white supremacy at the expense of Black equality.”

But rather than a reckoning, he says that the process should move through stages: confession, repentance, restitution, and repair.

“The moral call now before us,” he writes, “is not to solve an insurmountable problem but to begin a journey back to ourselves, our fellow citizens, and God.”

If White Too Long has a shortcoming, at least for general readers, there are some slow patches, including one chapter and lengthy appendices with an abundance of supporting statistical data for his views. For a pollster, it’s an understandable weakness.

But as this book demonstrates, Robert Jones is a man of conscience, raised as a Deep South evangelical, who is now a progressive and a committed anti-racist.

Implicitly, his book raises compelling questions for Democrats in the upcoming election: Are there others like Jones, among the Sun Belt’s white evangelicals, a cohort constituting a redemptive minority? That is, former Trump supporters, people of conscience who can be convinced to vote in November to oust a president whose views and actions on race and immigration deeply disappoint, if not offend them?