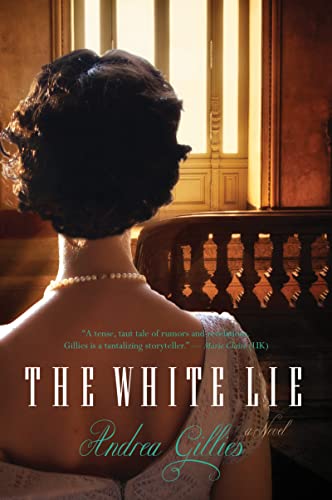 “. . . an absorbing plot line, filled with lies and surprises . . . drifts aimlessly in places and goes on for too long.”

The White Lie is suspense that combines the paranormal with the psychological. The story is set in modern day Scotland and is narrated by the ghost of Michael Salter.

The premise is intriguing.

Early on, Michael’s mentally unstable aunt Ursula confesses to killing her 19-year-old nephew by drowning him in the loch. To the aristocratic Salter family, Ursula’s confession is filled with inconsistency and appears absurd.

When the family fails to find Michael’s body, they decide to hide his murder. Many of them are not even convinced he is dead. Some believe he took off to escape the high-born Salters and make his own way in the world.

To protect Ursula, they concoct their own account of his disappearance. Or are they really protecting themselves? And from what? That Michael fled without even a goodbye to his own mother? Or that his aunt told the truth? These questions provide the narrative and conceptual basis of The White Lie, though it is certainly neither the only lie nor the only secret hidden by the fractured Salter family.

Years pass and the family are planning a 70th birthday celebration for Michael’s grandmother, Edith Salter. As preparations get underway, dissent among family members becomes increasingly obvious. The reader easily senses growing conflict between the different generations, all connected to the truth behind Michael’s disappearance.

The ghost of Michael’s great uncle David, who died in WWI, also haunts the woods near the family’s residence at Peattie House. The opening chapters are immediately suspenseful as well as brimming with conspiracy; a fascinating and promising concoction providing insight into a dysfunctional family.

However, the reader is challenged from the outset by a large cast of characters and continuous switches between past and present. At times, it becomes difficult to keep track of both the cast and the truth. As the narrator tells the story, we find ourselves tangled up with what really happened and the misrepresentations of the truth woven by various members of the family.

The writing is frequently quite beautiful, but often falls short. Long awkward sentences pepper the text. Pacing is slow and, at times, cumbersome. While detailed descriptions pull the reader deep into the book’s world, these also often drag and drift, leaving the reader a little restless. And characters while multilayered are also flawed.

The core of the story seems just beyond reach. As soon as one truth is uncovered, we learn others are still hidden, with all  obscuring the family’s most damaging skeleton.

It is the promise of disclosure of this darkest secret—what really happened to Michael Salter—that keeps us reading.

Throughout the story the landmark birthday celebration is simmering in the background. It is the thread that weaves all the story elements together.

The White Lie has an absorbing plot line filled with lies and surprises, but it drifts aimlessly in places and goes on for too long.