Sons of the White Eagle in the American Civil War: Polish Officers on Both Sides of the War Between the States 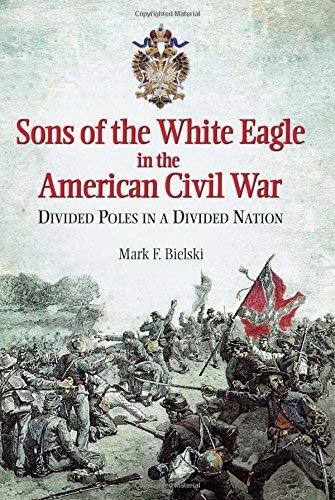 The presence of many prominent and not-so-familiar foreign individuals in the ranks of both armies in the Civil War is well known, especially Irish and German. One of the more famous (or infamous as the case may be) names that comes to mind is Franz Sigel.

In this book, author Mark Bielski has taken a representative sampling of men, of the thousands extant, who were first and second generation Poles and served on each side or were important civilian spokesmen providing moral and political support for their respective nations.

The first generation of these men, imbued with the concepts of nationalism and love of liberty, and inspired by Revolutionary War forerunners such as Thaddeus Kosciuszko and Casimir Pulaski, had served in various revolts and revolutions in their native land. They resisted the presence of imperialist forces of Russia, Austria, and Prussia in the 1830s and 1840s. In defeat, they came to the United States to begin anew and escape any legal retribution by their enemies.

The second generation, following the same examples as those of the first, chose their respective sides as the secession crisis reached a climax in America in the winter of 1860–1861. Those who “went south” did so not because of any support for slavery but partly as a result of viewing the North’s invasion in terms of the authoritarian regimes against which their forebears had struggled.

Although this study’s subjects were mostly of aristocratic origins, one was of peasant stock. They were officers and enlisted men, too, described as not necessarily homogenous but similar in many ways besides just being Polish.

As it was, there was one, Peter Kiolbassa of Texas, who switched sides after being captured and eventually served in the United States Colored Troops. Another, Ludwig Zychlinski, took leave mid-war to return to Poland to fight against the Russians.

Notwithstanding that most of these names may be unfamiliar to devotees of the War Between the States, two on each side should be somewhat familiar. Wlodzimierz Krzyzanowski and Joseph Karge were Federal officers who attained a measure of success and renown over the course of the war in the infantry and cavalry, respectively. The latter was one of the few who managed to inflict a defeat on General Nathan Bedford Forrest, albeit in a relatively minor skirmish.

On the Confederate side were Leon Jastremski of the polyglot 10th Louisiana Infantry, recognized as Louisiana “Tigers” (as were other units from that state), and Gaspard Tochman, who raised troops for the Southern Army, was denied a general’s commission but also, as a civilian, possessed the legal acumen to justify  the South’s secession under the United States Constitution.

The other three, Valery Sulakowski, Ignatius Szymanski, and Adam Gurowski also made their marks in the ranks and out. It would seem that Gurowski, for all of his support for the North, was sufficiently a Radical Republican to have been considered a physical threat to Abraham Lincoln’s safety and welfare at one point.

In any event, this study was well worth the effort to identify these men and their efforts. Complementing the well-organized text are a number of photographs and illustrations of the nine subjects and others cited therein; however, contrary to most publications, there is no indication of the source of these photographs. One might assume the Library of Congress.

The maps, primarily of the battles where each man fought (Gettysburg, Second Manassas, etc.) but also including one of northern Mississippi where Karge served, are excellent, include scale and specify the location of each man’s unit in the fight.

Six of the seven appendices are photographic reproductions of a respective subject’s muster roll card, immigration document, service record, or death certificate. The last is of Karge’s gravestone.

The author has demonstrated an extensive use of primary as well as secondary sources from memoirs and newspapers to the Official Records and contemporary books, journals, and articles. The research is impressive as indicated in the bibliography.

The historiography of this unfortunate period of American history has certainly been enhanced by Mark Bielski. It should be incumbent upon others to continue to delve into the origins, backgrounds, and service of other foreign nationals who participated on both sides of the conflict in order to more fully understand their motivations to sacrifice on behalf of their adopted country and set an example for those of their native land.