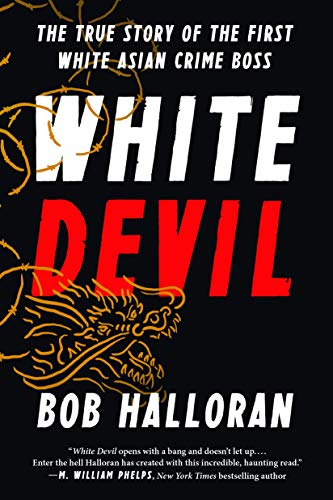 John Willis made an accidental connection with a Chinese gangster, helping the man named Woping Joe after a bar fight, and only months later they reconnect when John calls the number on the business card Woping Joe gave him. Desperate, alone, hungry, and cold, John is picked up by Woping Joe’s men and brought into the warmth of an extended mafia family and is given the job of standing and looking menacing during transactions in order to earn his bread and board. Eventually he graduates to collecting money himself, and is soon a full-fledged gang member, also completely fluent in Mandarin.

John is fiercely devoted to his adopted culture and loyal to the extended family of the gang. In White Devil, he speaks uninhibitedly about the violence he perpetrated and accepts as part of the job. With no regrets, he is interviewed by Bob Halloran, author of this book, who dutifully writes down John’s story while he serves prison time.

Reading this book is reminiscent of reading Nabokov’s Lolita except without the underage sex: a gripping tale with a unique yet reprehensible protagonist readers shouldn’t like or empathize with. Halloran tells the tale of a damaged youth who grows up to make bad choices and beats the odds of death to try and do good by those he loves most, his wife and daughter, while continuing on a dangerous path of racketeering, drugs, and murder to fund a lifestyle he has grown to appreciate.

The book does suffer from its pathetic portrayal of women—even those who are meant to be portrayed as strong women, such as John’s wife, Anh Nguyen, are immediately introduced by their looks and how much more beautiful or striking they are than the average Vietnamese or Chinese or Korean woman.

Also, the lack of discussion of John and the culture he adopts is sorely missing. Though amusing anecdotes about his inability to first use chopsticks grace the first few pages, the rest of the tale doesn’t share more than this, and adding this cultural element to White Devil would have made this work more well-rounded and a must-read.

It is unclear why Halloran chose John Willis as a topic to write about given that he is a sports anchor. While White Devil is entertaining at best and at worst it glorifies a dangerous, deadly, and reprehensible lifestyle by even giving voice to John Willis and by encouraging readers to be pulled along in this gripping tale of murder, theft, abuse, and more. This book offers John Willis a chance to validate and justify his poor life choices, and Halloran profits.