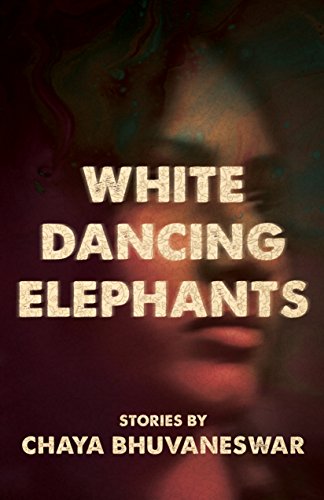 “Sometimes funny, always smart and honest, Chaya Bhuvaneswar’s stories hold the reader, even as the painful truths of human lives break through.”

“Adristakama,” or love for the unseen, is the title of the final story in Chaya Bhuvaneswar’s debut, White Dancing Elephants, and a concept that threads through these 17 stories. In this collection, winner of the Dzanc Books Short Story Collection Prize, characters struggle to love. They suffer when trying to see themselves and each other in the complex relations lurking below what they allow to be visible to the world.

In “The Goddess of Beauty Goes Bowling,” Bhuvaneswar explores the private pain of a man who perceives his daughter as a curse. After Gopi marries a woman 20 years his junior, his seeming good fortune sours after they have a daughter whose disability consumes his wife’s attention and precipitates their move from India to the United States. Gopi recalls the story of Vishnu asleep on a serpent and notes that his daughter, Shree, is oblivious not like the god, but “rather, his daughter was the serpent, rapaciously devouring them.”

Gopi’s son is sent to school in India under the care of relatives because his wife believes that her preoccupation with her daughter’s care “would prevent her son from getting all the attention he deserved . . . [s]he didn’t want him to feel the day-to-day cares of worrying.” On an important day for his young son, when an uncle halfway around the world assumes the title of “father” for the ceremony, Gopi blames his daughter for all his losses—his home in India, his comfortable employment there, his wife’s attention, and now even his claim to his own son. His simmering resentment reaches full boil.

The collection is bursting with stories like these, in which characters’ complicated, multilayered emotions are laid uncomfortably bare.

In the title story, “White Dancing Elephants,” the narrator, a woman in her early forties, confesses a raw, baffling swirl of emotions to her recently miscarried child: “I thought I felt rage when someone shouted a slur at me . . . or when someone called me a ‘cheap tart’ . . . or when a law passed in the US that that I didn’t agree with. . . . Before my last morning with you, my love, I didn’t know rage. I didn’t know how empty rage is, like a bag of bones.”

Throughout White Dancing Elephants characters learn the depth and texture of emotions they’ve never fully experienced before. In “Adristakama” a young Indian woman forgoes her female American lover for an arranged marriage then two years later, her marriage over, returns to work at a domestic violence services agency where her former lover, also an employee, avoids her.

The narrator is caught by her own wounded ego—"I want her to care enough to hurt me”—and a sharp sense of regret. She admits, “I was the one resisting her attempt to combine worlds. I was the one who wasn’t swayed by her grand gesture of following me to India. I was the one who told her It’s over, forget it. Now two years later, I’m the one here in New Haven, starving for a glimpse of her.”

Good short fiction pulls the reader deep into the hearts and minds of characters exploring complex emotions knotted into their particular situations while suggesting no one is immune from similar experiences. Sometimes funny, always smart and honest, Chaya Bhuvaneswar’s stories hold the reader, even as the painful truths of human lives break through.