Whistleblower at the CIA: An Insider’s Account of the Politics of Intelligence 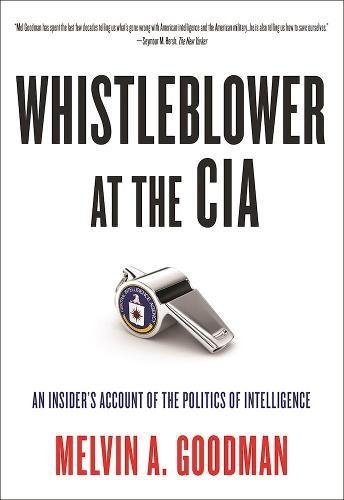 Author Melvin Goodman spent 42 years in government, including a 25-year stint in the CIA. Whistleblower at the CIA focuses on Goodman’s years at the CIA, and on the dysfunctional relationship between the president and Congress on matters of national security.

Goodman writes, “As long as Congress defers to the president on the conduct of national security; the courts intervene to prevent any challenge to the power of the president in national security policy making; and the media defer to its official and authorized sources, the nation will need courageous whistleblowers to make sure that CIA actions are legal, ethical, and moral.”

Whistleblower at the CIA jumps back and forth across years of Goodman’s service in government though Goodman keeps returning to the CIA. Goodman provides historical context—why the CIA exists and what the CIA does.

The CIA is comprised of two culturally distinct branches, Operations and Analysis. The purpose of Operations is data collection—spying. In spying, Goodman says the CIA is not rogue but carries out the orders of the president with plausible deniability so when the CIA’s activities are uncovered, anger will be directed at the CIA, not at the president.

The purpose of analysis is to study data from various sources to determine foreign nations’ capabilities and intent. Analysis is nominally to be kept separate from Operations to be an “honest broker” in providing information to the President. Goodman, worked as an intelligence analyst at the CIA and believes intelligence analysts who best serve their country, will ignore pressure to arrive at ideological conclusions.

The CIA was created by President Truman as a civilian organization specifically to counter inflated military assessments made by analysts in the Department of Defense of the Soviet Union. President Truman never intended the CIA to be under control of the department of defense or to be a spy agency. Against Truman’s intent, through the years the CIA has become a spy agency, led by Director of National Intelligence (DNI), which is a department of defense position, and has become an organization that provides ideologically driven national security analyses.

Goodman lists his bonefides: A three-year tour in U.S. Army as cryptographer, two years in Greece as part of U.S. military mission, and he was present the Suez crisis of 1956. He was behind the scenes at the U.S. invasion of Lebanon in 1958. He was polygraphed four times. Employed by the State Department in the Bureau of Intelligence Research from 1974 to 1976, he spent the summer of 1976 on embassy duty at the U.S. embassy in Moscow.

Goodman studied Russian history in graduate school, graduating with a PhD in Soviet-American relations. He then worked from 1964 to 1990 as an intelligence analyst at the CIA. After retiring from the CIA, Goodman taught as a professor of international security at the National War College (NWC), retiring after 18 years to join the Center for International Policy, a think tank.

When Goodman joined the CIA in the 1960s, the CIA was a male-oriented club with great esprit de corps. Goodman received no training as an analyst, and he admits he was naïve. When he joined the CIA, he believed the CIA to be a research institution in international relations and not involved in clandestine operations.

Goodman describes the work of an analyst, noting that the CIA is good at determining capabilities but poor at discerning intent. Goodman describes what goes into the president’s Daily Brief and the excitement that he, a junior analyst with no formal training, could contribute to an intelligence document for the POTUS. He believes intelligence information provided by the CIA is be useful for any negotiation arena, serving as an independent source of information from the State Department or Department of Defense.

While a CIA analyst during the Vietnam War, Goodman attended antiwar rallies without repercussion, and claims that there were a number of CIA analysts who were antiwar. However, CIA analysts who were on the “Vietnam account” who were opposed to the war or critical of the President’s policy were reassigned. He claims the Secretary of Defense McNamara lied to President Johnson about CIA intelligence by suppressing reports that the war was unwinnable. In the end, “the CIA became a whipping post for failed policy.”

Scapegoating appears to be a common tactic. Goodman was an insider at the first Strategic Arms Limitation (SALT) talks under President Nixon. The role of the CIA was treaty pre-verification, needed before the senate would vote. Goodman claims the Department of Defense did not want an arms treaty with the Soviet Union and lied to the President about Soviet capabilities.

Whistleblower at the CIA contains a chapter on Goodman’s testimony on Robert Gates who was nominated for the position of CIA director by President George H. W. Bush in 1991. And though Goodman claims the status of whistleblower in this instance he was an approved whistleblower, as Goodman was invited to speak to the Senate Subcommittee that vetted Gates. In a blow-by-blow account, Goodman documents Gates’ distortions of intelligence, showing readers the dirty politics kept hidden from the American public. Goodman writes, “Policies and process are often discernable; politics are the best kept secrets of Congress.”

Goodman provides a litany of Gate’s misdeeds: William Casey (the CIA director) and Gates (CIA assistant director) were never committed to providing objective intelligence. Gates advocated bombing Nicaragua after Daniel Ortega’s election in the premise that Nicaragua would become a Russian base—a belief with no evidence.

We may never know how deep Gates and Casey were in the Iran-Contra scandal. Casey died of a brain tumor soon after the Iran-Contra hearings, and President George H. W. Bush pardoned any and all CIA officials who might have been involved. Gates claimed he was not involved at all, something not believed by Congress. Goodman likens Gates disavowal to the more recent CIA Director John Brennan’s disavowal of knowing anything about CIA directed torture of prisoners.

Jumping ahead to 1991, President George H. W. Bush considered the confirmation of Robert Gates to CIA director as a test of loyalty, no matter how damaged Gates was as candidate, no Republican senator was willing to go against the president. The senate was able to keep one of its members on the intelligence committee in line on the vote by threat. One Republican senator on the intelligence committee was in trouble with the ethics committee in a banking scandal, and he voted for Gates in return for a pass on ethics.

Robert Gates was confirmed to direct the CIA by a vote of 64 to 31.

Goodman also claims the vetting process is not just bad but so bad that a series of “bizarrely” bad CIA directors have been chosen. Goodman writes, “The CIA is deeply damaged, but no one appears to want to fix it or know how, including congressional intelligence committees charged with oversight.”

In another chapter, Goodman lists acknowledged CIA intelligence analysis failures: the failure to anticipate the North Korean invasion in 1950, the Soviet invasion of Hungary 1in 1956, the Cuban Missile Crisis 1962, the Soviet invasion of Czechoslovakia in 1968. After the CIA failed to anticipate Egyptian-Syrian attack on Israel in 1973 (known as The October war), the CIA then failed again by predicting Israel would win quickly.

Goodman also lists CIA analysis successes (and this list seems shorter): CIA intelligence gave enough time for President Kennedy to react before Soviet missiles were ready to be launched from Cuba. The CIA provided intelligence that allowed President Nixon to force Israel to a ceasefire in the October War. The CIA successfully predicted the expulsion of Russian civilian military advisors from Egypt after the October War; however, when Egyptian President Sadat hinted he wanted the U.S. to replace the departing Russians, Secretary of State Henry Kissinger did not follow up.

Goodman claims there was CIA infighting over how to react to the Soviet invasion of Afghanistan in 1979. Evidence shows the Soviet’s move into Afghanistan was defensive, a response to Islamic terrorism. However, the U.S. reacted as if the Russian moves were offensive. To counter the Soviets, the U.S. then supported Islamic terrorists. Goodman writes, “I believe the most vehemently anti-American Islamists currently operating in Afghanistan are part of the very organizations . . . that the CIA assisted.”

Misunderstanding Russian intent seems to be a trademark of the CIA. The Soviets believed the U.S. was going attack Russia with nuclear weapons during NATO military exercises in 1983, code named Able Archer. Goodman writes, “[the year] 1983 was the most dangerous year in Soviet-U.S. relations since the Cuban Missile Crisis.” During the crisis the CIA was at a disadvantage because the Pentagon was unwilling to share their knowledge of U.S. military maneuvers and weapons deployment with the CIA, so the CIA only saw one-half of the equation: the Soviet response to U.S. military provocation. Some good did come from this. Once President Reagan realized how close we came to nuclear annihilation, he began improving relations with the Soviet Union, culminating in the 1985 Reagan-Gorbachev summit.

In the chapter The Press and the Whistleblower, Goodman covers the cozy relationship between media and the government—friendly coverage is the price of access. The CIA sponsors academia in trade for good press, including symposia and academic exchanges where the CIA gets to choose the speakers.

Goodman identifies media events from which he was invited then disinvited. He believes disinvitation came from fear the CIA would cause problems for his hosts. He tells the story of a CIA analyst who was stopped at the door of a public event that hosted a high-ranking U.S. official. The analyst was turned away, Goodman believes, because the event included a question and answer session. Goodman notes, “Most of what appears in the media on international security is a reflection of what the government wants you to read.”

The concluding chapter of Whistleblower at the CIA is worth the price of the book, providing context for national security from the past to today.