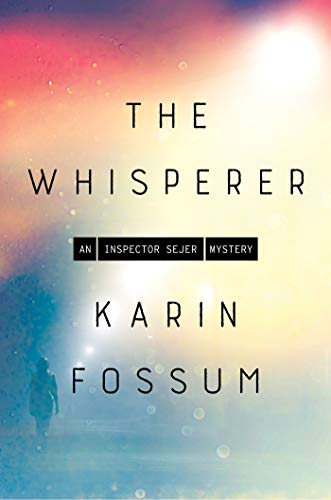 “The Whisperer is more than just a thriller, it is an exploration of a woman’s descent into madness, and it is more frightening than one can imagine.”

Karin Fossum’s latest Inspector Sejer novel is a psychological thriller that delivers suspense and chills in equal measure as the inspector tries to understand how a lonely woman who only wants to be left alone and unnoticed is now charged with murder.

Ragna Roegel is a woman of routine. She always sits in the third row behind the bus driver, and is upset and frightened if someone else claims her seat. “If the place was taken, she was upset. She felt displaced. Someone was encroaching on her territory.”

She takes the same number of steps between the bus stop and her front door. She still lives in the house where she was born and raised, where she raised her own son, Rickard Josef, the result of her single sexual encounter with a famous photographer who later moves to Sweden.

Rickard Josef moves to Berlin when he is 17 and is now the director of a five-star hotel. Ragna receives a card from him at Christmas and on her birthday, although he never calls or visits her. “She is proud of him, in a way, even though he had more or less cut all contact with her.”

Still she is more or less happy, or believes she is. “. . . being alone made her vulnerable, but it also gave her a sense of freedom and control.” Control is very important to her.

When she finds a letter in her mailbox addressed to her, but obviously hand delivered, she is curious. When she opens it there is a short message: “YOU ARE GOING TO DIE.”

Ragna is at first bewildered, than as the days pass, more frightened. She knows of no one who would threaten her. She puts the letter into the trash where “it lay among the old rotting food.”

More and more events occur that erode Ragna’s sense of control over her own life. Her long-time neighbors move away to be replaced by a Thai family. The little market across from her home where she always shops run by a Turkish immigrant suddenly closes. Her letter to Rickard Josef is returned with a notation that he no longer lives at this address.

She sees a man watching her house and calls the police, but no one ever comes to talk to her. She begins watching people at work, wondering if a customer or one her co-workers are responsible for the letter—or letters, as she has received others. “IT’S NOT LONG NOW.” Another said “I’M WATCHING YOU.”

Finally Ragna takes her last letter to the police, but no one takes her seriously. Unable to sleep and by now terrified, she visits her doctor for advice. He prescribes a medication with careful instructions, but she always takes more pills than he advises. Still she cannot sleep.

A man keeps coming into the shop where she works. He wears a suit as if he was an undertaker or an agent of some business. Is he the one? Is he threatening her?

The days pass; she doubles up on her pills but still cannot sleep. Someone pounds on her door in the middle of the night, but she is afraid to answer the door. And she cannot scream for help because a long-ago surgery gone wrong left her unable to talk above a whisper. Then the final letter is left on her bedside table: “I AM CLOSER THAN YOU THINK.”

Then Ragna is brought from her jail cell to Inspector Sejer’s office for interrogation. The evidence against Ragna is so overwhelming that Sejer sees the case as open-and-shut. Still he is curious; he wants to know what prompts a quiet, unassuming spinster like Ragna to commit such a vicious crime.

As Sejer questions Ragna, the whole story of intimidation, isolation, her inability to reach Rickard Josef, her inability to sleep, and the police’s unconcern, pours from her in her quiet voice over several days.

Sejer offers to contact her son for her, which he does, but what he learns is not anything Ragna imagines it will be.

As Inspector Sejer continues to question Ragna, and to verify her story, he begins to wonder if the case against her is not what it seems. “. . . what she had said about her father had also set him on a new track that he chose to keep to himself for the moment.” If what he is thinking is true, then everything is changed.

The Whisperer is more than just a thriller, it is an exploration of a woman’s descent into madness, and it is more frightening than one can imagine. To see reality upturned and to believe utterly in that reality as Ragna does, only to find that reality is mere perception, not true at all, is the true horror of the story.

Karin Fossum is a master at constructing a compelling horror story out of real life. Although Ragna’s angst is almost more than one can tolerate in places, it is necessary to understand the character. That is all Ragna wants in the end, that someone understand her.

The Whisperer is recommended for all fans of Nordic mysteries where angst is almost a requirement.