Which Side Are You On? The Story of a Song 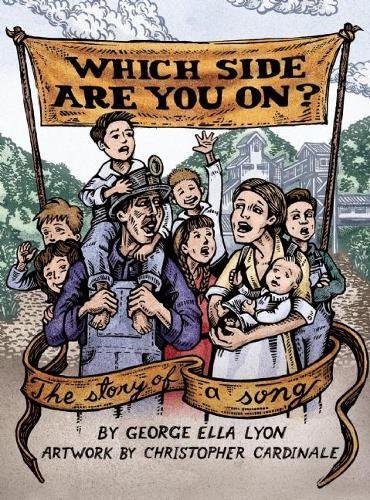 What a perfect time for this picture book’s arrival, in the wake of widespread protests of Wall Street’s abuse of power. “Which Side Are You On?” is an old song with new relevance for a generation facing a dubious future.

Ms. Lyon, an acclaimed children’s book author and native Kentuckian, takes us back to the hollers of Depression-era coal country to show the harrowing circumstances that gave birth to the song that became a rallying cry for union organizers around the country.

Florence Reece and her seven children are literally dodging bullets, which zing through the windows of their small home. The coal company was out to get her husband, a union man, but he’s off hiding in the nearby mountains. Despite grim circumstances, Ma’s determined to help the workers. On the back of a calendar page, she scribbles the words of a song she thinks will stoke the courage of the miners striking for better pay and working conditions.

Along with the dramatic story of that night, the lyrics of the famous song appear in script that unfurls in golden banners: “Come all you poor workers,/ Good news to you I’ll tell,/ Of how the good old union,/ Has come in here to dwell.” Again and again comes the haunting refrain, which parents and educators will want to invite children to sing: “Which side are you on,/ Which side are you on?”

Ms. Lyon employs a lively pace, along with mostly realistic dialect and revealing dialog to tell a gripping story few children today have heard. Even adults might not recognize how many features of our work environment—minimum wages, paid holidays, sick pay, health benefits, and safety regulations—came about because of the labor movement.

The shiny, expressive illustrations pack energy and humor into the story. Often the dialog comes inside bubbles, as when Ma tells her oldest son, “This ain’t easy, but sometimes you’ve got to take a stand.” His wise-guy response: “I don’t see us standing. I see us under the bed.” That page also includes a vicious green snake displaying the line “Don’t scab for the bosses. Don’t listen to their lies.”

Tellingly, the snake loops through the legs of a grim-looking company man. Mr. Cardinale provides a surprise with his inclusion, on the last page, of a sharp black-and-white photo of Florence Reece on her 85th birthday, tucked scrapbook-style beneath yellow corners.

In her author’s note, Ms. Lyon provides valuable context for Which Side Are You On? explaining how the coal companies abused their power by creating dangerous working conditions, by rewarding hard-working men with poverty and debt, and by resorting to violence when miners stood up for their rights. In fact, another name for the author’s native Harlan County, the setting of this story, is Bloody Harlan.

Both the stirring lyrics and our working conditions have changed over the years. Yet, the thirst for social justice persists—as does the need for such a song.