Which Country Has the World's Best Health Care? 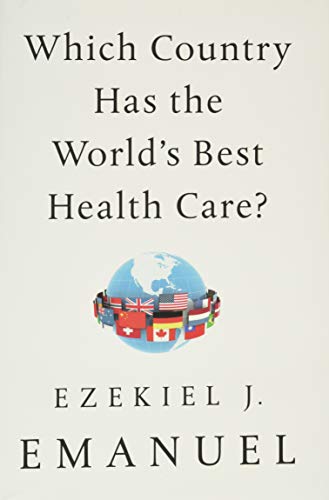 Which Country Has the World’s Best Health Care? attempts to apply a narrative for health system functions and not merely recite data and for that, Ezekiel Emanuel is to be applauded. However, at the end of the book he waffles on declaring a winner for best health care, which is unsatisfying. Of the 11 national health systems included in this analysis, Netherlands was the only country in the top criteria for nearly all measures: universal coverage and benefits, equitable subsidies and financing, choice of doctors and excellent primary care, and pharmacy pricing. Of course, this book does not represent the entire health care world, but it is a solid effort reflecting four continents. Ignoring India, a country with the second largest population, which has many centers of excellence is a gross oversight. Also, not a single country from South America was reviewed, including Chile which has had a vaunted socialist health system for years.

There is much to admire in this epic tome, including the level of frontline research that occurred inside these nations, because this is not merely high-level analysis using OEDC or WHO data (which does rank the health systems of 191 nations). Clear language on various health care delivery systems is pronounced in the summary sections at the beginning of each chapter. For example, when referring to the US private employer health system, the book refers to it as “Employer sponsored insurance,” which is more accurate than saying employer provided insurance, a label often bandied about in government and the private sector. Very few nonunion employers pay for all of the health care premiums for employees and their families. Rather, the employees pay heftily to buy insurance through their employer.

Emanuel is also deft in explaining the rate of turnover in US health care plans, with the example that at least 25% of enrollees in the Affordable Care Act Insurance Exchanges are new each year. People move around, their family circumstances change, and this is reflected in the churn for healthcare plans.

Translating the DRG coding for billing and reimbursement is masterfully explained with this line, “But the hospital can have different rates with different private insurers, so another private insurer might pay 2.2 times the Medicare (reimbursement) rate for the same cardiac bypass surgery at the same hospital.” He also rightly alludes to the State of Maryland’s rate-setting policy for hospitals, which makes costs more transparent and less expensive. “In the 1970’s Maryland adopted an all-payer rate setting which is used in other countries such as France, Germany, and in the Netherlands.”

On hospital care, he writes, “Most independent research shows consolidation typically leads to higher prices for physician services, drugs, laboratory tests and other services, suggests no improvement or a decline in quality.”

Emanuel also disabuses the notice that the US healthcare system is mostly private, because the Veterans Administration is in fact a single payor health system and Medicare is socialized medicine. Even the private sector health plans are heavily subsidized by the federal government through income tax deductible insurance premiums and health care benefits which are not taxable. And the latest rendition, the Patient Protection and Affordable Care Act, takes the incentive further by advancing the tax credits up front for individuals to entice them to buy medical insurance.

Lest you think the book is a snooze-a-thon, this statistic of mental health care should wake you, “Since 1955 the number of inpatient psychiatric beds has declined 97%.” Anyone who has spent time in any US city can attest to the number of street denizens who are in fact mentally ill.

Pharmaceutical policies are widely reviewed in the guidebook and the comparison to other national drug policies, and the US is particularly effective. “In approving new drugs, the Federal Drug Administration is not supposed to consider anticipated drug costs or cost effectiveness.” It makes perfect sense that the US pays the most for drugs, because negotiating with the drug companies is prohibited in government plans such as Medicare.

Another observation from the book is that nations that spend more money in their healthcare systems do not necessarily have shorter queues for services or the best patient outcomes. And for all of the money the United States throws at health care its patients do not have the greatest choices for health care providers, because of restrictive insurance company reimbursement contracts. This is of course, the exact opposite of the industry rhetoric, that socialized medicine will remove personal choice of your doctor.

This book is written for policy analysts and healthcare systems experts, which means it is not that approachable for everyone else. In the introduction the author does a good job of conveying complex data which an educated layperson may find more approachable, explaining his global health care analysis. The last three chapters ranking the countries for healthcare, conclusions with recommendations for improvements to US healthcare, and the coda on the corona virus are all readily absorbable. Especially useful are the six lessons in the conclusion to improve health care in this country: expanding universal coverage through automatic enrollment and increased government subsidies, providing coverage to all children at no cost to their families, simplifying the health care system, increased emphasis and payment for primary health care, implementing best practices for chronic and mental health conditions, and regulating drug prices. “The United States needs to join the rest of the world in regulating drug prices.”

Worst in class continues to be the United States health care system, and Emanuel is not optimistic a single payor plan will emerge here.