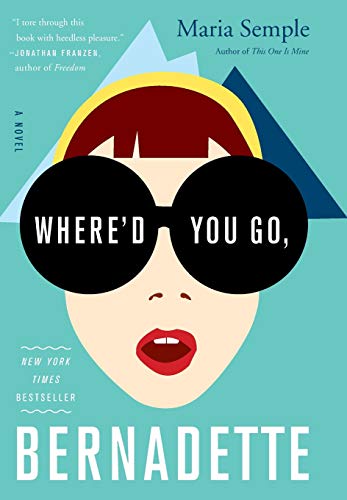 This contemporary novel is certain to lure the reader from the first page in which we are introduced to eighth grader Bee Branch via a copy of her report card. Bee is an extraordinary student, multitalented and mature for her age.

Her mom, Bernadette Fox-Branch was once the recipient of the distinguished MacArthur Grant for her prowess as an architect, though that was several years ago, long before Bee’s birth. It was thought Bernadette would rock the design world with her talent, but after suffering a disaster with her first project, Bernadette more or less becomes a recluse.

She and her husband, Elgie, move from Los Angeles to Seattle, where Elgie is a genius in his own right, holding a high position at Microsoft. They purchase a decrepit, abandoned school for wayward girls, which Bernadette plans to renovate into something spectacular.

Renovations never take place. Instead, Bernadette locks herself in a small trailer on the property and communicates with an online virtual assistant who handles everything from purchasing her groceries to calling in her prescriptions.

Elgie, meanwhile, spends more time at work on a new product and is rarely home. When he is, he is oblivious to what his wife is doing. She does not cook, but orders takeout; she does not clean, their home falling into even greater disrepair; and she does not socialize with anyone except her virtual assistant, who is only a name on the computer.

Next-door neighbor Audrey Griffin does not like Bernadette. Not only does she find the protagonist’s home an eyesore, but she resents Bernadette’s blackberry bushes infringing on her property. She is determined to have them removed no matter what; before long she and Bernadette are in a constant battle.

Then Bernadette goes missing. The reclusive woman takes off leaving no sign of where she has gone and all of her possessions behind. Elgie and Bee are confused and upset, but Bee is determined to find her mother. Where is Bernadette?

Where’d You Go, Bernadette? is written in journalistic fashion, each character speaking in his or her own voice. The reader becomes privy to every player’s thoughts, reactions, and feelings, which gives in-depth insight to the storyline, making for an intense and compelling tale.