Where You Left Me 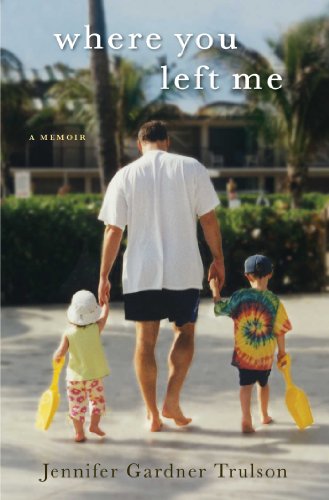 Imagine feeling blessed with a wonderful life and having all your dreams come true. Then imagine your life torn apart in a heartbeat. This is exactly what happened to Jennifer Gardner on the fateful day of September 11, 2001.

Jennifer’s blissful life included completing her law school training and marrying Doug Gardner, the man of her dreams as well as her soul mate. Living in a lovely Manhattan apartment with their two precocious toddlers, Michael and Julie, they built their dream summer home in the Hamptons in 2000. Life could not have gotten any better.

Michael’s first day of preschool fell on Tuesday, September 11, 2001. Doug did not accompany Jennifer with their son due to an early meeting at his firm, Cantor Fitzgerald, located on the 105th floor at New York’s Twin Towers.

Becoming a single mom at age 35, Jennifer cocoons herself in her apartment during those first horrendous weeks in the aftermath of 9/11. Though having the comfort and assistance of her parents, in-laws, siblings, and close friends, she becomes paralyzed with anxiety, fear, and sorrow. Her life with Doug had been extraordinary and meant to last a lifetime.

An interview with Connie Chung three days after the attacks finds Jennifer a celebrity of sorts, though she had to field crass and callous comments made by others regarding her television appearance. Though many remarks are untoward, Jennifer realizes they are other people’s way of showing sympathy and concern.

Jennifer struggles through the first year of Doug’s death, trying to be attuned to her children’s wants and needs. She forces herself to attend every invitation she receives, if for nothing else but to take her mind off her terrible loss.

Jennifer and her children spend the summer of 2002 in the Hamptons. One night at a restaurant with friends, Jennifer encounters Derek Trulson—a breathtakingly handsome man who accidentally steps on her foot! Jennifer discovers talking with him proves cathartic. Though Jennifer experiences thoughts of disloyalty to Doug, she and Derek become great friends.

Derek proves to be a wonderful role model to Michael and Julia. Jennifer’s friends, including close buddies of Doug’s, find themselves drawn to the charismatic man who had recently relocated to New York from Seattle.

Jennifer’s tale is written straight from the heart as she relays her indescribable loss and heartache. Through her own strength combined with the love and strength of family and friends, she overcomes her loss and finds a new life for herself and her children. A poignant love story, this memoir gives insight to the horrific event this county faced that September day by bringing the reader face to face with the harsh realities of life and by recognizing that good can be possible after tragedy.