Where They Stand: The American Presidents in the Eyes of Voters and Historians 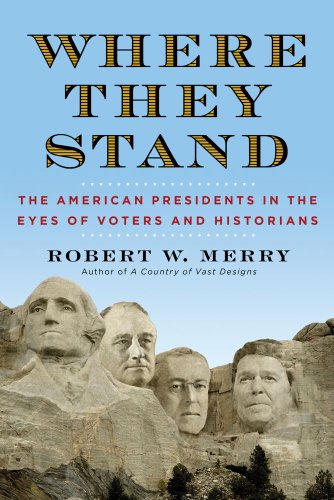 “The Almighty has His own purposes,” Abraham Lincoln memorably said.

And history has its own judgments, especially when it comes to American presidents. Ever since Arthur Schlesinger, Sr.’s 1948 ranking of the nation’s chief executives, a pantheon has taken shape in the American mind.

Robert W. Merry’s Where They Stand is a congenial and learned presentation of what he calls “The Great White House Rating Game.” His fundamental premise is that there are only two standards for evaluating presidents: the judgment of history and the judgment of voters.

Mr. Merry argues that the two complementary criteria are equally valid ways of assessing presidential success. Presidents enjoying strong political support—usually reflected in winning two terms—must be reckoned with by history. They’ve usually made some history of their own.

Certainly this is true of those in the special category Mr. Merry calls Leaders of Destiny: presidents who won two terms in office or served the majority of two terms after the death of a predecessor, who succeeded in maintaining party succession in the White House, who transformed the nation’s political landscape, and who reside near the top of historians’ lists.

Only six, by Mr. Merry’s reckoning, meet this test: Washington, Jefferson, Jackson, Lincoln, Theodore Roosevelt, and Franklin Roosevelt. But there might soon be a seventh.

Mr. Merry reveres the presidency and has an irrepressible optimism about American history and an old-fashioned democratic faith in what he calls “presidential-referendum politics,” the four-year process by which Americans choose a chief executive.

For the most part, he contends, the electorate doesn’t make its decisions based on the political trivia and spin that often dominate headlines. Most have to do with substantive questions of governance.

The electorate he sees, over time, is unsentimental, shrewd, and collectively often wise.

His examinations of how the various presidents got their places leads to highly readable and enjoyable excursions through history, and as with most assessments of presidential greatness, it is the author’s dissents from the historical consensus that are most interesting.

Woodrow Wilson, one of Mr. Merry’s “split-decision presidents”—serving two terms but unable to ensure party succession, and in most cases less successful in the second term than in the first—has enjoyed consistently high rankings. But his second term was close to calamitous.

Mr. Merry puzzles at history’s continued esteem for Wilson, though it shows signs of waning—he dropped out of the top ten for the first time in the 2005 Journal survey. “The voters had it right,” he says of Wilson’s place. “The historians seem off the mark.”

Mr. Merry also takes issue with Ulysses S. Grant’s longstanding reputation as a presidential failure. His second term was overwhelmed by corruption scandals, and his unwillingness to exert strong executive leadership “allowed Congress to sap the power of his office.”

Grant’s presidency is more properly regarded as a mixed bag. Mr. Merry also wonders why Warren G. Harding should have spent so long on the bottom of presidential lists.

Mr. Merry suggests liberal-minded historians made up a decisive majority of panelists until the 2005 Journal poll, which may have overcorrected the other way.

Going back further, Mr. Merry also disputes the common rating of James Madison as only an “Average” president. Like Jefferson before him, Madison maintained party succession after his two terms in office. Not bad at all, as Ronald Reagan might say.

Reagan’s place is still being sorted out, but in Mr. Merry’s view, he should soon join the Leaders of Destiny club. Mr. Merry is clearly sympathetic to the 40th president’s achievements, but one need not be to recognize that within the author’s schema, Reagan clearly fits in the top tier.

As for Barack Obama, Mr. Merry thinks that while he has some characteristics of the Leader of Destiny, he chose early on to “take the country where it didn’t want to go”—a judgment probably better reserved until November 2012. Mr. Merry cites the health care law, which passed without a single Republican vote and was upheld by the Supreme Court.

And he finds wrongheaded Obama’s oft-repeated statement that he isn’t afraid to be a one-term president; it reflects a suspicion about the voters that great leaders don’t indulge.

What we’re not told about the Leaders of Destiny who altered the nation’s political landscape is whether the changes they wrought should be regarded as beneficial or damaging.

Mr. Merry praises, for instance, presidents James K. Polk (he wrote an acclaimed study of Polk’s presidency) and William McKinley, both successful in what many regard today as wars for empire.

Taking the long view is never easy, especially in hard times, but it might increase our chances of finding the presidents we need—whether leaders of destiny or just good sense.

Paul Beston is an associate editor of the Manhattan Institute’s City Journal.