Where They Found Her 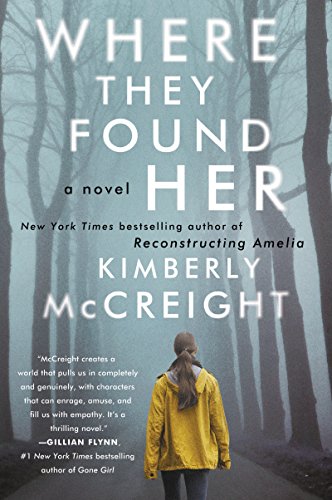 For the purist writer, reading Where They Found Her begins as a troubling read—not because of the story, but because author Kimberly McCreight jumps from first-person point of view to third-person point of view, then back and fourth between several different characters. Added to these POV changes are the diary entries that take the reader into the history of yet another character as well as the interview tapes between the main character, Molly Sanderson, and her psychiatrist as Molly copes with the stillborn birth of her second child.

Molly Sanderson is a writer for the local newspaper, The Ridgedale Reader, and is given an assignment to cover the discovery of a dead newborn baby in the river near Ridgedale University. Having experienced the death of her own child just two years earlier, this story hits close to home.

She struggles with her own demons regarding this death and yet as she digs deeper into the story and the location, she discovers that getting to the bottom of this story will also get her to the bottom of her own story.

McCreight has developed an ensemble of deeply troubled characters from all levels of society in Ridgedale. Justin Sanderson, Molly’s husband, supports her in every way, although quietly wonders if this assignment may not be problematic for her recovery. Sandy, a quasi-homeless teenager discovers her mother, Jenna, has disappeared from her life and her search brings her into contact with Molly. Molly’s acquaintances, Stella and Barbara, both have children in the school system with Molly’s daughter, Ella, and both women have a great dislike for each other. And both have other secrets crucial to Molly’s personal and professional survival. Barbara’s husband, Steve, is the Ridgedale police chief investigating the death of the infant, and he carries his own secrets.

As these characters and myriad other unsettled characters interact, the search for Jenna and the search for answers to the death of the baby become tangled with the death of a student at Ridgedale University many years earlier. McCreight does an exceptional job of peeling off layers of history in the small town of Ridgedale, New Jersey as she exposes its few, but violent deaths and how they finally relate to one another.

A good who-dun-it has lots of twists and turns, foreshadowed events, red herrings, and clues, clues, clues. Where They Found Her is not lacking any of these items, cleverly placed. Just as the reader thinks, “Aha! I figured it out . . .” the story turns on a dime and the reader discovers that, indeed, he did not figure out anything. The reader will be taken up with the story and although believing the answers are right there, will finish the book, close it, and say . . . “I would never have thought that!”

Regardless of this reviewer’s personal POV issues, McCreight weaves these situations together into an exciting read. McCreight has produced a book that can truly be called a page-turner with all the requisite tension and conflict and empathy that will add to her success as a fine storyteller.