Where the Heart Was 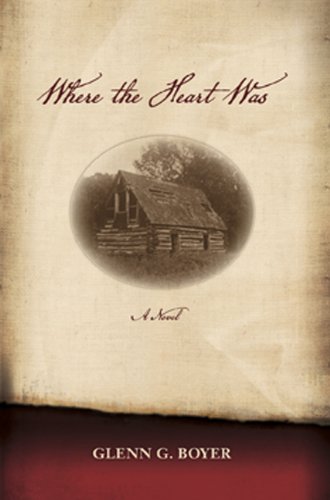 “I, Edwin Newton Cheek, rode off to war that spring I was eleven, in the warm fly-buzzing days—in the spring of the lush lilacs, 1861. I rode on my little Indian pony, Cannonball, beside my father, Lieutenant Colonel Robert Cheek. I wasn’t exactly a drummer boy, though I was enlisted as one. I had more freedom. I never beat a drum. I was more a mascot. I rode down the main street at the head of the regiment with Pa and Colonel Smith, the regimental commander, passing between hunting-draped business houses, all closed in our honor.”

Through the eyes of Ben Edward Todd, the protagonist, Where the Heart Was is a journey into the real day-to-day life of growing up in America after the Civil War. This American saga reflects the history, the determination, and loyalty of diverse people from various ethnic groups all making the best of whatever situation or difficulty they encountered. This is the lovingly written story of a family and their lives in this country, focusing especially on the Great Depression years.

The writing style is similar to James Michener’s, with the story concentrating mainly on the author’s life experiences. The change in our country that occurred during the Industrial Age, when people went from living at a subsistence level to becoming educated and successful in a manufacturing-based economy, is an underlying focus in this novel, as well as is the resulting change in our basic social needs. As time progresses, Mr. Boyer takes the reader into the trials and tribulations of daily life during this exciting time in history.

The strength of this novel is its accurate and detailed focus on the times in which the characters reside. As you read each page, it is clear in the strong development of each character that the author imbues each one with a clear sense of being alive in a period so different from our own. From dealing with the issues of racism, to wars, to the reality of life during the years of Herbert Hoover and F. D. Roosevelt, you feel as if you are there with them, back in time. Glenn Boyer also succeeds in engaging all the senses in this very American story.

Where the Heart Was begins with the Civil War but looks at it from the point-of-view of someone who is actually witnessing each event that follows. There is the suggestion that the war was about more than slavery, and that differences in economic situations had more to bear on the conflict than is generally understood.

Where the Heart Was immerses with the reader in patriotism, with clear pride in the building of this country, elegantly making parallels in the progressive development of each character. It is obvious that this work was a labor of love for the author. He demonstrates palpable care for his characters and their lives as he magically tells Bennie’s story, which is somewhat autobiographical.

Glenn G. Boyer based this book on his life growing up in north central Wisconsin. Previously he has been considered an expert on the life and times of Wyatt Earp. Where the Heart Was also shows him to be a masterful storyteller about his own life and family.

Teri Davis is a reviewer for The New York Journal of Books.