Where Good Ideas Come From: The Natural History of Innovation 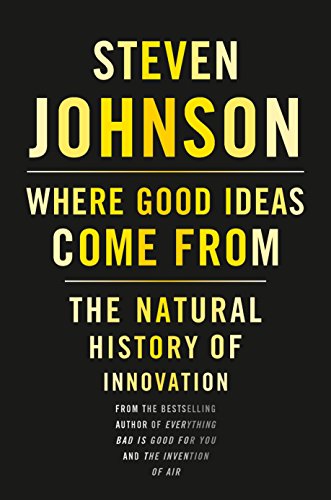 “Though Mr. Johnson’s stories of the origins of ideas are entertaining, even illuminating, far more valuable is his distant reading of the history of ideas and analysis of their circumstances, applied through his four-quadrant model.”

The very title of Where Good Ideas Come From conveys the place sources of and influences on idea creation. Commencing with the work of Charles Darwin and coral reefs, Steven Johnson traces the story of the network as a source of ideas from below the water to land, then to the built environment of cities, and ultimately to the virtual environment of the Internet.

The intersections of more urbanization—more people moving to cities, more people traveling between cities, and people traveling virtually through the Internet as well as through expanding social and other media environments—are highly stimulating to innovation and idea creation. And, to the extent the Internet replicates and promotes movement within and between cities, even more innovation is likely.

Though some might favor more precise terminology, in Mr. Johnson’s book ideas, innovation, and invention largely operate as synonyms. He explores where ideas come from through stories about ideas, the people who promulgated those ideas, as well as the places that created conditions conducive to those ideas. Provocatively, the author suggests that ideas are stimulated by seven factors, common to both cities and the Web.

That the Internet is enabling and facilitating place interaction is inarguable, for location applications are the fastest growing of applications. Movement within and between places is aided by rapidly growing social network sites that promote ever more connecting and networking; the implication of Mr. Johnson’s theory is that these accelerated interactions shall lead to more ideas and more innovation.

Nearly a century ago, French mathematician and physicist Henri Poincare, to explain why his best ideas and mathematical breakthroughs emerged when walking rather than sitting at his desk, advanced the theory that motion—mental and physical—stimulates a realignment of atoms. As atoms move, they interact and produce new combinations, different from those that existed in the static state. Thus, Monsieur Poincare concluded the very act of motion stimulates innovation.

Reading can be considered the cognitive equivalent of taking a walk, leading to the benefits of physical motion, as Mr. Johnson observes, “While the creative walk can produce new serendipitous combinations of existing ideas in our heads, we can also cultivate serendipity in the way that we absorb new ideas from the outside world. Reading remains an unsurpassed vehicle for the transmission of new ideas and perspectives.” The idea that reading is a significant source of ideas is certainly reinforcing to those who value books, and, given the author’s work of producing books, fully consistent with his self interest that his work be valued.

Mr. Johnson advances the proposition that before the communication technologies of the printing press and the postal system were widespread, innovation necessarily was individual oriented and not readily monetizable in a market context. He describes this early period as dominated by such “rogue visionaries as Di Vinci, Copernicus, and Galileo. Certain of these geniuses, most famously, Galileo, did their work removed from conventional society, because their innovative ideas posed such threats to established thinking.”

Those innovations that did emerge during this early period “have their geographic origins in cities where information networks were more robust.” Following this individual dominance of the Renaissance period, “Two centuries later, a majority of breakthrough ideas emerged in collaborative environments.”

Beyond the entertaining, illuminating stories about the people and places of ideas, the significant contribution of this book is the author’s initiative to provide an organizing framework conducive to the birth of bigger ideas. To this end, his approach is the polar opposite of the traditional “close reading” of literary texts, which focuses on a particular book that is analyzed in great detail. In his studying of the sources of innovation, Steven Johnson adapts the “distant reading” style favored by literary historian Franco Moretti.

One illuminating application of this approach is a graph of genres of British novels published from 1740 through 1900, displaying 44 subgenres of the British literary ecosystem, starting with the courtship novels and including such subgenres as the spy novel, gothic novel, historical novel, nautical tales, mysteries, sensation novel, fantasy, invasion literature, decadent novel, and the women’s novel. Any such organizing scheme, such as Franco Moretti advances concerning literary work and Steven Johnson employs concerning innovation, of course, reflects the author’s framework, decisions, and analysis. Because this research is so novel, so significant, and so impressive, challenging what has come before, its very fresh, untested, unanalyzed state has kept it from being generally accepted.

Particularly fascinating is the author’s advancing an organizing structure for ideas—a two-by-two matrix of market and nonmarket, individual and network—in which he positions some 200 plus innovations, clustered in 200 year periods from 1400 through the present. The data to which the author’s analytics are applied are provided in an appendix chronology of key innovations.

As there of course is no generally accepted innovation chronology—the innovations listed by Mr. Johnson are those that he has gleaned from his own study of the history of science and innovation—some might dispute the representativeness, completeness, and balance of his innovation inventory. The consideration that others might advance different organizing schemes or frameworks by no means diminishes the significant contribution that such advances represent.

Mr. Johnson positions the origins of ideas in four quadrants:

His concluding chapter reveals his predisposition toward the important role of nonmarket/networked environments in facilitating creating ideas. Mr. Johnson asserts that a significant reason that there has been such concentration of ideas in the fourth quadrant is the “information commons”—whose significance to innovation was explored by Lawrence Lessig in The Future of Ideas: The Fate of the Commons in a Connected World—attributes of universities, for “most of the paradigmatic ideas in science and technologies that arose during the past century have roots in academic research.”

To be sure, over time each of the four quadrants shows a substantial, even dramatic increase in idea incidence. Most notable, in terms of idea origin is that network-sourced ideas collectively now strongly dominate individual-sourced ideas. As well, nonmarket idea origins are much greater in number than market-originated ideas. Notably, it is from 1800 to the present, that nonmarket ideas have emerged as dominant.

Though Mr. Johnson’s stories of the origins of ideas are entertaining, even illuminating, far more valuable is his distant reading of the history of ideas and analysis of their circumstances, applied through his four-quadrant model. Related research on how place attributes, exposures, and experience influence innovation merit at least parallel consideration.