Where Did the Jobs Go—And How Do We Get Them Back? Your Guided Tour to America’s Employment Crisis 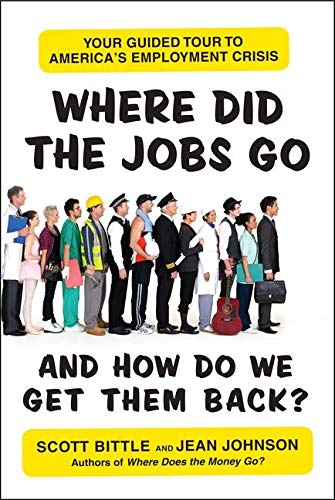 “. . . Where Did the Jobs Go is nothing like a prescription for fixing America’s jobs problem, regardless of the subtitle’s promise (And How Do We Get Them Back?). Instead, it’s mostly a compendium of hard data and expert pronouncements that are fairly balanced on both sides of the debate. . . . whether you believe that government is the problem or that government is the best mechanism for solving the jobs problem, you can find evidence in this book to support your point of view.”

Imagine sitting around a large dinner table on some holiday evening with your entire extended family. Between remarks about how great the food tastes and how healthy Grandma and Grandpa are looking, a discussion breaks out about how to fix the lack of jobs in the U.S. economy. You have your opinions. Your cousins have theirs. And your crazy, unemployed Uncle Joe, as always, wades in with some “facts” that seem to come out of left field—along with some quick fixes that are neither quick nor fixes.

If your family is anything like mine, you’ll have to admit that nobody is a bona-fide expert on the topic, but everyone is convinced that their facts are more right than your facts and that their opinions are waaaaay smarter than your opinions. Eventually, dinner is over and the conversation drifts on to other topics, with most of your family’s assertions remaining unsupported and Uncle Joe still unemployed.

Mr. Bittle and Ms. Johnson have penned a book that may do no better than your family at creating more jobs in America, but at least it gives you and your relatives a quick, easy place to find thoroughly supported facts and figures on most of the details surrounding the jobs problem, such as:

• Recent job trends in the U.S. and their impacts on people and the economy
• Major economic and social changes we’re all going to have to live with
• Details about the government’s $787 billion stimulus and its impact on jobs
• Ditto with the auto-maker bailout

The book also discusses most of the big proposals from both sides for fixing the jobs problem:

• Balancing the budget
• Cutting taxes
• Reducing regulation and government interference in business
• Stimulating the regrowth of U.S. manufacturing
• Fixing our educational system
• Rebuilding our crumbling infrastructure
• Narrowing the economic gap between the wealthy and the rest of us

There are also lucid discussions of four major factors that have already impacted on jobs in the U.S., and are almost certain to produce even greater impacts in years to come:

To sum up their observations and arguments, the authors advance more than a dozen ideas—reflecting all parts of the political spectrum—that proponents say would serve as fixes for America’s jobs shortage. They support each idea with a brief pro and a short con explanation to reprise the book’s previously elucidated factors and facts. They also offer some commonsense “ground rules” in hopes that citizens can have more fruitful discussions on the topic.

Mr. Bittle and Ms. Johnson have had success before (Where Does the Money Go and Who Turned Out the Lights), and they have tried to follow that formula with a lighthearted treatment of the topic couched in everyday, culturally “hip” prose.

For example, they write: “Economists are duking it out over how to get the economy moving, and the researchers and the statisticians can leave you punch drunk. . . .” It’s cute and it’s fun, and it makes the book seem more accessible. But since the topic remains difficult, obscure, and full of ambiguities, how well colloquial language improves a reader’s understanding of the central issues is not clear.

Physically, the book is very lightweight (400 pages of paper weighing barely more than 10 ounces), and some might propose this as a metaphor for the book’s content. But that’s not fair. Lack of jobs is a complex problem, and as the authors readily admit: “. . . in doing this book, we’ve been surprised at just how many aspects of the jobs issue are in dispute.”

The science of economics, unlike physics and chemistry, is not susceptible to experimentation. Sometimes, you get lucky, as when New Jersey and Pennsylvania, just across the Delaware River from each other, bet their economies on opposite sides of the minimum wage dispute. But even then, simply comparing economic performance in the two states doesn’t provide clear answers. And most of the time, there’s no “control” group that remains untweaked by the economic experimenters, so you can’t know for sure to what extent interventions like the federal government’s $787 billion stimulus really did help the economy.

As a result, Where Did the Jobs Go is nothing like a prescription for fixing America’s jobs problem, regardless of the subtitle’s promise (And How Do We Get Them Back?). Instead, it’s mostly a compendium of hard data and expert pronouncements that are fairly balanced on both sides of the debate.

Incidentally, I’m wondering whether the even-handedness of the expert opinion in this book reflects a world in which the experts are evenly split, or whether the authors simply selected two opinions from Column A and two from Column B without bothering to reflect the relative length of each column. Even in response to a direct query, the authors wouldn’t say.