When Your Child Is Being Bullied: Real Solutions for Parents, Educators & Other Professionals 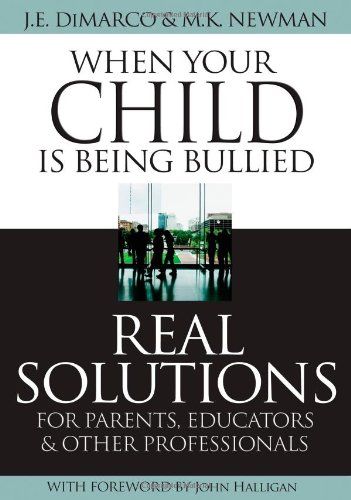 “This book can help conscientious parents empower themselves and their children so that together they can help safeguard the emotional health of all children.”

There is an abundance of self-help books about childhood bullying on the market and for a good reason: The problem has reached epidemic proportions. Because most incidents occur at school, educators have been forced to deal with it even as underfunded schools struggle to teach basic academics. Effective bullying intervention and prevention programs require staff training, which means taking teachers out of classrooms. More time must then be found in class to teach students empathetic behaviors, once taken for granted, now sadly lacking in today’s school culture.

When Your Child Is Being Bullied, by J. E. DiMarco and M. K. Newman, both mothers of bullied children, is aimed primarily at parents and rightly so. If the problem is to be solved, it will have to start in the home with informed parents assuming the major responsibility for their children’s behavior. The problem is too massive and complex to be left to schools alone.

Readers will identify with Ms. DiMarco and Ms. Newman’s personal stories and their frustrating search for solutions; however, after telling a very painful story about her son’s persecution by his fellow football team members, Ms. Newman admits that the ultimate solution was to switch her son to a private school. It felt a bit disingenuous to suggest an option that is simply not affordable for most families. Even changing public schools might not be feasible due to transportation issues and tight work schedules.

The inability of the administrators at her son’s school to solve the problem is a common experience. There is good advice about legal remedies if a parent is getting stonewalled by school administrators. In the back of the book are templates which can be downloaded from their website for documenting bullying incidents. There’s also a contract agreement form that can be used as a basis for negotiations between the bully’s parents and the bullied child’s parents.

There is an insightful chapter on why bullies feel a need to harass their peers. I would like to have seen more emphasis on compassion for the bullies who are manifestations of the aggression and meanness rampant in our culture today. Bullying will not be solved until we recognize that today’s bullies have been created by our competitive, tough society—which rewards winning above all other values.

Overall, this is an excellent book, but a couple of strategies suggested by the authors do not resonate. The authors actually approve of fighting back if the bully refuses to back off. And they specifically mean pushing and shoving. They acknowledge that this is a controversial suggestion but that “it works.” Of course, this has been the conventional advice for generations. But that does not make it right, nor safe. Most experts now advise caution when responding to bullies. Retaliation by bullies can be vicious, even deadly, in a society where guns are widely available and the Internet can be used to ruin a child’s social life indefinitely.

The best advice always is to tell an adult. In a high school in Miami where bullying is taken seriously, students are taught to keep reporting the incident until they are convinced someone in a position of authority has listened and is going to do something. At some schools, this can be a long wait. The authors strongly encourage parents to be persistent until satisfied that the bullying has ended and that there is no more contact between the bully and the target.

Another questionable piece of advice the authors give concerns ways to repair damage to a bullied child’s self-esteem by telling the child about praise from significant adults in the child’s life. “If you have to go out and find this information or make it up (emphasis mine), remind your bullied child that several people admire her.” This conjures the image of the “helicopter” parent, always hovering, ready to fix all her child’s problems. The authors go on to advise that the parent talk to the child’s sports coach and ask for him or her to praise the child.

Most children I know, including my own, would “die” of embarrassment if they found out their mother was going around the community soliciting praise for them. So if some of the authors’ advice sounds like micromanaging and deception, chalk it up to their concern for their kids—but don’t follow it if it feels as if it violates your sense of ethics.

Aside from their approval of fighting back (even as a last resort) and the invention of praise, the book does contain sound, practical advice about becoming an advocate in the school system. The authors stress that the real responsibility for eliminating the bullying pestilence rests with parents. Respectful, compassionate children have learned empathy by witnessing it at home and if raised correctly have the self-esteem and confidence to eliminate bullying in their schools by refusing to remain silent bystanders.

This book can help conscientious parents empower themselves and their children so that together they can help safeguard the emotional health of all children.