When We Were Sisters 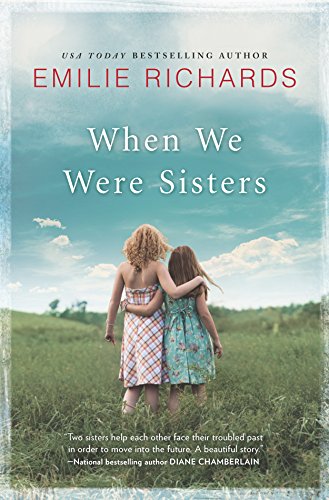 One does not have to share blood to be a sister, for sometimes an emotional bond is greater than a biological one. Such is the case with Robin and Cecilia. The two met when relegated to foster homes. Cecilia, four years older than Robin, takes the girl under her wing when they come to live in the same home.

Cecilia, born to teenaged parents, lost her father in a construction accident when she was a toddler. Her mother, unable to cope, succumbs to drugs and different men, proving an unfit atmosphere for a young child.

Robin's mom, allegedly a victim of date rape, vanishes before Robin turns two. Her cold-hearted and overly strict grandmother raises her until she becomes ill, forcing nine-year-old Robin into the system.

The girls become friends forever when Robin at nine and Cecilia (CeCe) at thirteen are assigned to what is considered a therapeutic environment as Robin does not talk and CeCe is a troublemaker. Through the kindness and guidance of their caretakers, the two guarantee a lifetime connection, knowing they can always count on each other.

As adults, Cece becomes a famous singer wanting for nothing whereas Robin gives up her career as a photojournalist to marry work-driven lawyer Kris Lenhart and raise two children.

The women's camaraderie remains strong as the years pass. CeCe's fame escalates while Robin sees her marriage disintegrate. Kris is never home and the kids have other interests, leaving Robin as the maid, chauffeur, cook, etc. It takes being injured in a life-threatening car accident to make Robin recognize she wants to change her life.

CeCe visits her in the hospital with a proposition. A renowned director wishes to produce a documentary showcasing CeCe's life as a foster kid for which CeCe begs Robin to be the photographer. Away from her passion for many years, this is what Robin needs to focus on herself. Though she understands Kris will not be happy about her decision, she is determined to do this. Now is time for him to be a parent to their children and attend to household duties.

Kris does not like CeCe and appears jealous of the bond she shares with his wife. Robin tries to explain to him her close relationship with CeCe in the following:

"I'll teach you a lesson about why some people survive terrible things and go on to flourish at least more or less. Somebody loved them. Somewhere along the way somebody cared enough to stretch out a hand and help them along.

And, if the survivor is blessed with strength and some modicum of insight, then he or she may find courage to keep moving through the bad times. . . . And those horrible years convinced me there was nothing left to lose, so why not plunge in head first and take whatever chance presented itself?"

Throughout production, CeCe showcases her life from birth demonstrating the difficulties she faced as a child without having a stable family and feeling unloved. While CeCe faces demons and her inability to commit to relationships, Robin deals with her past while accomplishing something just for her even though it could cause a final break between her and Kris.

Emilie Richards approaches her tale with the protagonist facing a life-changing situation, allowing her to face the reality of her life and recognize it is not what she envisions. Penned with an open-minded approach to this dramatic topic, the book ends up conveying what many do not realize about the hardships and torments children can face in the foster system. With its straightforward, honest, and uplifting prose, When We Were Sisters touches on long-lasting emotions of youngsters growing up in environments dissimilar to their peers. The well fleshed out and plausible characters add particular dimension, and though one may not understand the complexity of their earlier lives, the dialogue ensures the authenticity of the issues explored in this novel.