When the Sparrow Falls 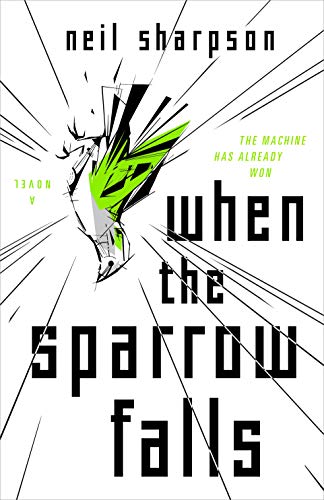 “The machine persona is not unlike a human psychopath: it lies perfectly, without compunction or any sense of shame.”

Making a digital clone of yourself is forbidden in the Caspian Republic, a totalitarian state set in a far future that exists uneasily within a world run by artificial intelligence. The small Caspian landmass is home to the last remnants of the human race, a ghetto, in essence. Conditions there have taught Agent Nikolai South to trust no one, to work only hard enough to not draw attention, and above all never to make enemies.

The machines “ruthlessly enforce” their taboo against duplication, so naturally illicit digital copies are the meat of Neil Sharpson’s detailed sci-fi thriller that blends a retro spy atmosphere with thought provoking technology of the future. “Contran”—the word is both a noun and a verb—is the digital transfer of an individual’s consciousness.

Throughout the Republic one can find scattered “empty husks” of those who illegally transferred themselves in order to join the machine world. And yet the word “machine” is everywhere—as a noun, an adjective, a pejorative. The machine persona is not unlike a human psychopath: it lies perfectly, without compunction or any sense of shame.

The book begins with the hanging of a high-ranking agent who betrayed the state. His was a name “written in bile.” Because security is tight only a single journalist is permitted to attend the execution, the highly credentialed Paulo Xirau. The reporter shocks onlookers and crosses a line when he spits in the corpse’s face. Why do such a thing?

“Secrets form to the very bedrock of the nation.” Postmortem, the executed Party propagandist is discovered to be a machine clone. The discovery is alarming because a contran is not simply a criminal matter. It is a matter of State Security, or StaSec, an agency the reader will easily confuse with ParSec, or Party Security. The two are naturally paranoid about each other.

While the hanging takes place Agent South is out examining a crime scene involving a pair of twins. He discovers telltale marks of a surreptitious contran. The bodies are now merely husks, and he is sad. “The twins had turned their backs on humanity and surrendered to the machine.” It was not the first contran he had borne witness to, nor even the 500th, “but this one felt like a point of inflection.”

South is summoned by the Director of State Security. She has picked him for a special assignment because no one will miss him if he were to disappear. In addition to the twins’ contran case, South is to investigate the murder of Paulo Xirau and also chaperone his widow, Lilly, who is soon arriving from the machine world to claim her husband’s remains. But is she really? Lilly is the first machine ever allowed into the country. Tensions run high.

What is more, Lilly looks exactly like South’s late wife, although Lily is unaware of this. Is the resemblance a deliberate attempt to lower South’s resistance and gain his trust? He has no frame of reference, making it hard to guage Lily’s story. He sees only two possibilities: “Lily was a spy or she was not. She was either lying or telling the truth.” His search for evidence to prove either proposition is elusive.

Paulo himself turns out to be machine, one thought to have been smuggling out chips etched with the contrans of numerous defectors. South is thrown into a maelstrom of murder, betrayal, and conspiracy that may put an end to the Republic. In illuminating the corrupt framework of the Caspian Republic, When the Sparrow Falls speaks to authoritarianism, complicity, and identity in the digital age.

This is a debut novel for Neil Sharpson, who heretofore has been a playwright. He does a decent job painting a police state and the undertone of fear that permeates everyday life. But the dialogue is riddled by wisecracks—think of any Eve Arden movie. Rookie writing errors range from point of view violations, faulty syntax, and inconsistent tenses to dialogue tags, clichés, and missing the subjunctive mood.

Exposition abounds when interior psychological revelation would be welcome. Then there is the mysterious Yozhik, an anonymous rebel who has liberated scores of citizens from the Caspioan Republic. Her actual identity is revealed quite late in the book without the author having planted adequate clues earlier. The dénouement gets confusing and leads up to a surprising Contran copying.