When We Rise: Coming of Age in San Francisco, AIDS, and My Life in the Movement 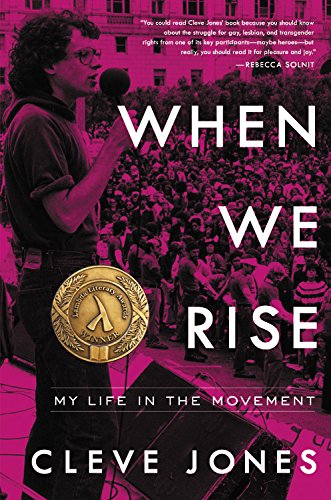 Last year, journalist Michelangelo Signorile’s It’s Not Over detailed how the right wing and some religious groups were working feverishly with antigay organizations to attack any pro-gay initiatives such as marriage equality, gays serving openly in the military, and even LGBTQ anti-discrimination protections in employment and housing. In the wake of the 2016 election GLBTQ Americans have even more reason to mobilize to protect civil-rights. San Francisco activist Cleve Jones’ memoir When We Rise couldn’t come along at a better time. It is a stirring account of Jones’ “Life in the Movement” that spans 40 years and is otherwise an inspiring rallying cry for social justice and vigilance.

Jones grew up in the 60s, the rebellious son of liberal professor parents, early on choosing his own resolute and if necessary defiant path academically, emotionally, and sexually. Jones’ activism began while at Arizona State University,  where he joined a small gay college group and even arranged for legendary lesbian feminist pioneers Del Martin and Phyllis Lyon, co-founders of The Daughters of Bilitis, to speak there.

Soon enough, Jones became involved in a number of allied political causes on the West Coast, eventually moving to San Francisco. In San Francisco he worked as a hustler and took a number of part time jobs to save money. He became part of the booming community of thousands of gays and lesbians emigrating from their hometowns to live their truth in a liberated environment.

From the start Jones was a rebel with a cause, aligned with the gay civil-rights pioneer Harry Hay, who challenged the philosophy that only definable difference between homosexuals and heterosexuals was what they did sexually. To gay liberationists it was a matter of immutable sexuality as well as identity, character, community, and even spiritual awareness.

As part of his education, the 20-year-old Jones also took time out to travel and tramp around Europe, an eternal a student of history and not wanting to miss out on summers of international free love. Jones’ observations about gay life in various countries are candid, witty, and unexpectedly romantic in the travelogue in the center of the book.

Jones continued to go back to Europe during his 20s and recounts his numerous affairs with men in several countries. Meanwhile, he was also establishing himself in San Francisco as a formidable social justice organizer. He was back in college and was a student intern on Harvey Milk’s election campaigns to win a seat on San Francisco’s newly formed Board of Supervisors. He worked side by side with Milk to organize all over California to defeat the Briggs initiative that would have barred gays and lesbians from teaching in public schools. And he worked in at City Hall after Milk won the supervisor seat representing the Castro as the first openly gay elected official in California.

Jones’ account of the Harvey Milk and Mayor George Moscone murder by Dan White is a gripping inside account and eloquently non-exploitive. It is rather an insider testament to the compassion, fortitude, and community strength of gay and straight San Francisco. Jones’ leadership skills were eventually noticed by the state’s Democrat establishment in Sacramento as one of the state’s first gay community organizers and liaisons.

In the early 80s, Jones returned to San Francisco when it became one of the first cities to deal with the growing AIDS epidemic. Jones co-founded the San Francisco AIDS Foundation and created the AIDS Quilt Memorial Project, which memorialized over 85,000 Americans who have died from AIDS. The quilt became a living memorial to remember those lost to AIDS and bring awareness to the horrific realities of HIV-AIDS and the community of compassion as well as survival strategies in the face of a homophobic culture and the hostile indifference of the Reagan Administration.

By the late 80s, Jones was diagnosed as HIV-positive and as his T-cell count dropped, starting to present with opportunistic infections symptomatic of AIDS. He became a longtime survivor whose health was restored by the advances in the mid-90s of anti-viral medications.

His lifelong commitment and vigilance regarding social justice and equality for all minorities is an unbending profile of compassion, courage, and poetic truth.  When We Rise is an inspiring manifesto for LGLBTQ solidarity in a perilous time. It is in part also the basis for screenwriter Justin Lance Black (who won an Oscar for his script for Milk) and producer Gus Van Sant’s upcoming ABC mini-series about the gay civil rights movement.