When the Light of the World Was Subdued, Our Songs Came Through: A Norton Anthology of Native Nations Poetry 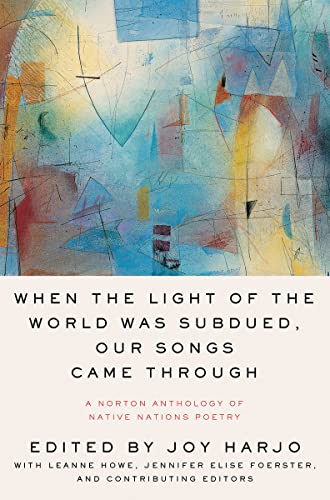 “this collection is transcendent in its authority and eternal power.”

The book opens with an invocation by N. Scott Momaday (1934–), a Kiowa poet laureate of Oklahoma and Pulitzer Prize-winning novelist.

“Prayer for Words (My Voice Restore for Me)” by Diné has the following ending lines:

“if my mute heart expresses me/I am the rolling thunder and the bursts/Of torrents upon rock, the whispering/Of old leaves, the silence of deep canyons/I could/Articulate the night sky, had I words.”

Momaday and the poets in this anthology have the voice and words, many writing in the style and craft of their tribal lineage, to document and witness their history, their lives, and the brutal realities of the fates of their people at the hands of those who “discovered” their lands.

In her introduction, poet Joy Harjo writes “We begin with the land. We emerge from the earth of our mother and our bodies will be returned to earth. We are the land. We cannot own it, no matter any proclamation by paper state. The anthology then is a way to pass on the poetry that has emerged from rich traditions of the very diverse cultures of indigenous peoples from these indigenous lands.”

The stunning imagery of these works and humanitarian cry of the “songs, spells, and prayers” in this book, are a journey of poetic discovery and virtuosic craft.

Several of the poets are writing both in their ancestral languages juxtaposed next to the English translations, an opportunity to experience the intended full artistry—the rhythms, sounds, and preservation of the tribal storytelling traditions. Their verse, from classical forms to modernist expression, is the antithesis of Euro-centric sensibilities pedagogy.

Many are documents in real time of ancestral, oral art forms communicated through ritualized language, dance, instruments, natural sounds, communing in every part of life with the earth and all forms of life.

This text and these “songs” document centuries of genocidal atrocities and indignities of oppressed indigenous nations and a silenced culture, representing five regions of what was claimed as “the Americas” by invading nations

Deborah A. Miranda, born in Los Angeles (from the Oblone/Costanoan-Esselen/Chumash people) writes the essay introducing the U.S. Southwest poets, “As we journey through this poetic space, languages ripple like mountain ranges: Dine, Western Apache, Yaqui, Spanish seeps in, legacy of early colonization left behind like a worn scar; English gets pulled and stretched into Indigenous syntax and rhythms, as older languages like Keres, Cahuilla, Esselen, Mojave, Kumeyaay, Yurok, Chumash, Yuman, and Koyongk’awi push up against English like submerged rivers, slowly and relentlessly indigenizing the footprint of another colonial invader.”

Silenced voices often speak volumes. This entry by Anonymous (poet from Room 8) student placed in a military Indian Industrial school in PA the late 1800s in the Carlisle Indian Industrial School, founded by a Lt. Col. Richard Pratt as a tool of assimilation, with the inhuman motto: “Kill the Indian . . . and save the man.” The Anonymous student pens the chillingly cryptic lines; “My Industrial Work” describes “Standing in the wind our hair gets wavy/ But, just the same, we right face, and march to gravy.”

Or this from Eleazar (b?–1678), tribal affiliation unknown, entered Harvard in 1675 but died of smallpox before he graduated. He wrote in the required classical form of an elegy, but echoes his heritage, writing of being “intertwined with immortal winds.”

Or this elegy from Linda Hogan, born in Denver, of Chickasaw heritage, in the late 1940s, an NEA and Guggenheim award winning poet, and Native Writers’ Circle of the Americas Lifetime achievement awardee.

“My dear one is a jar of burned bones I have saved./This is where our living ones and still we breathe/And even the dry grass/With sun and lightening above it/Has no choice but to grow//And then lie down/With no other end in sight./Air is between these words, fanning the flames.”

The poets in this anthology are artists, historians, and keepers of the truths of their heritage, their people, and their lands. These poems are testament to their personal journeys and this collection is transcendent in its authority and eternal power.