When I Was White 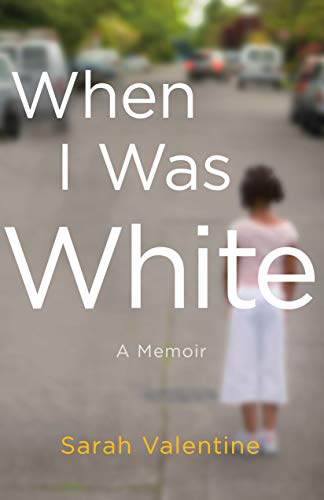 “In this densely packed memoir, it’s not really the destination that matters most, but rather the journey itself that goes over very rough territory and asks probing questions about race, ethnicity, and racism.”

In When I Was White, Sarah Valentine has crafted a contemporary detective story in which the author investigates the mystery of her birth and identity. As in a traditional mystery, the sources don’t always tell the truth, and clues don't always pan out.

There’s no murder here, but rather the theft and concealment of personal history. The culprits, Valentine’s mother and stepfather, don’t see themselves as guilty of a crime, or as bad people, but they definitely caused trauma by effacing her biological father, an African American who may or may not have raped the author’s mother.

At one point Valentine’s mother says she was raped; the author writes that she was “conceived in rape” and was a “child of rape,” though the book offers no irrefutable evidence of rape. She does acknowledge the heavily freighted subject of sex between white women and black men in America.

With the encouragement of her mother and stepfather, Valentine passed for white for years and suffered greatly. She eventually realized that she was “complicit in whiteness,” and that “whiteness operates as an oppressive identity.”

There are many books about passing—which has long been a part of the American experience. Anatole Broyard was among the best known 20th century black men who passed for white.

He worked for The New York Times. His two brilliant autobiographical works, Intoxicated by My Illness (1992) and Kafka Was the Rage: A Greenwich Village Memoir (1993), were published after his death in 1990. Broyard’s daughter, Bliss, wrote a memoir titled One Drop: My Father's Hidden Life: A Story of Race and Family Secrets (2007) that anticipates Valentine’s in some respects.

Then, too there are emotionally charged books about families in which one parent is white and the other is black. The Color of Water: A Black Man’s Tribute to His White Mother is an outstanding example.

Still, there’s really no other book that comes close to When I Was White.

For one thing, Valentine nearly worries the subject of her identity to death. For another, she doesn’t tell her story chronologically. It isn’t until chapter 23 (on page 154) that she writes, “I was born December 6, 1977 at Chestnut Hill Hospital in Philadelphia, Pennsylvania,” though she agonizes about her birth long before that chapter arrives.

One might call When I Was White Afrocentric in the sense that Valentine takes on an African American identity and comes to see what she calls “structural racism.” She writes that “when white people are forced to confront race and racism, it’s easy for them to turn away.”

The anti-racist author and activist, Robin DiAngelo, addresses some of the same issues that Valentine explores. DiAngelo’s 2011 book, which was a bestseller, is titled White Fragility: Why It's So Hard for White People to Talk About Racism. A child of poverty, DiAngelo defines herself as white and calls on whites to “deconstruct white privilege.”

At the end of When I Was White, Valentine explains: “I wanted to be able to write a family history that answered all my questions and filled in all the blanks, but all I got were different versions of the past and an unfulfilling present.”

In this densely packed memoir, it’s not really the destination that matters most, but rather the journey itself that goes over very rough territory and asks probing questions about race, ethnicity, and racism.

Valentine didn’t write the history she set out to write. But she has written a narrative that’s honest, unflinching, and true to herself. After nearly 300 pages, she leaves readers with a bundle of stories about her family, her parents, and her search for a self, but she doesn’t provide unambiguous facts and the Truth with a capital T.

In the last paragraph of When I Was White, the author offers readers a rich and complex idea, rather than a simple statement. “It is in the breaking apart that we find beauty,” she writes.

Valentine’s publisher, St. Martin’s, suggests that the book offers insight into what “it means to be Black in America.” That might be good copy for publicity purposes, but it’s also misleading. When I Was White doesn’t try to tell the story of Black America. It doesn’t touch on experience of Barack and Michele Obama, nor does it include the stories of poor rural blacks in the South, or black men and women locked up in prison.

There was plenty of angst, depression, and emotional pain in Valentine’s life, but not poverty or grinding social and political oppression.

When I Was White is valuable precisely because Valentine tells her own individual story that’s about a young woman who grows up with a roof over her head and food on the table and clothes to wear. She goes to college, earns a Ph.D., and becomes an expert in Russian literature, though her professors don’t make it easy for her. Her skin color colors their view of her and prevents them from serving as real mentors.

“I tend to have long term relationships, but will end or sabotage a relationship before someone has a chance to betray my trust,” she writes.

When I Was White goes all over the place. It might have been more focused and less all encompassing, though that would have been a challenge.

The book began as an article with the same title and was published in 2015 in The Chronicle of Higher Education, along with a photo of Valentine and her two brothers. The article has the kind of clarity that’s often missing in the book. In her 2015 article, Valentine wrote that coming out black, “cost me my relationship with my mother and some of my closest friends. It cleaved my sense of self in two.”

In the book, itself the author describes her “own private hell.” Indeed, to read her memoir is to go through a psychological inferno. It’s not for everyone. But it can be rewarding for those who make the arduous journey.