When Freedom Speaks: The Boundaries and the Boundlessness of Our First Amendment Right (Brandeis Series in Law and Society) 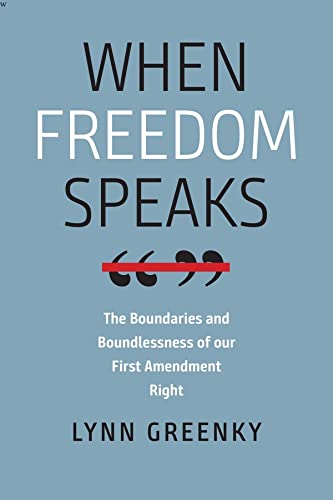 “When Freedom Speaks by Lynn Greenky is an excellent introduction and exploration of the contentious field of First Amendment jurisprudence. Both entertaining and educational, it provides the knowledge necessary for an informed electorate.”

“Congress shall make no law . . .” So begins the First Amendment of the United States Constitution. Enshrined within the First Amendment are the rights of free expression, religion, the press, and assembly, along with the right to petition the government for grievances. These rights are of such importance the Founders listed them first. The challenge with the various manifestations of free speech involves their practical application. Where does one individual’s rights stop once they infringe on the rights of another individual? Lynn Greenky tackles the thorny topic of free speech jurisprudence in the aptly titled When Freedom Speaks: The Boundaries and Boundlessness of Our First Amendment Right.

In a brief introduction, she lays down the ground rules for free speech in the United States. To summarize, hate speech is protected, assaultive speech is not. “Pornography and obscenity are not the same. One is protected, the other is not. . . . While money may speak, sometimes people choose to remain silent and their silence often speaks volumes.”

The first chapter is a short history on the genesis of the Constitution and the debate over the Bill of Rights. After the disastrous Articles of Confederation, the Founders debated on the form of the Constitution. The challenge involved balancing a strong executive branch and the rights of the people. An executive branch that was too weak invites insurrections and political chaos (see France from 1789 to 1914). At the same time, the people deserve the fullest freedoms possible. A balance was struck with the Bill of Rights, a combination of enumerated and unenumerated rights. Although the Constitution was written a long time ago, it is not a document set in stone. It is a living document with amendments being added. The latest was in the 1990s.

Free speech law is confounding, maddening, and messy. In the conclusion, author Lynn Greenky lists “anarchists, socialists, religious zealots, and civil rights activists, among many others, to thank for their contributions to our understanding the boundaries and boundlessness of our First Amendment right to speak freely.” Included in her roster of free speech pioneers include the likes of Fred Phelps, Larry Flynt, George Carlin, and the Washington Post. Regardless of where one falls on the political spectrum, there will be an individual that will make someone’s blood boil. Right, left, or otherwise, all are protected under the aegis of the First Amendment.

Greenky, formerly a lawyer, is now an “associate teaching professor at Syracuse University . . . where she teaches an undergraduate course about the First Amendment.” When Freedom Speaks operates as a college textbook. With cases described in succinct and lively prose, it elucidates the legal stakes of those involved. How are the words and/or actions squared against the words of the Constitution and the interpretations of the Supreme Court? (Greenky also offers a short explanation on how a case gets to the Supreme Court and how the Court hands down a decision.) Like an auto enthusiast explaining how an internal combustion engine works, she shows us how, legally speaking, the parts work.

“Civil rights and abortion rights have played an outsized role in First Amendment jurisprudence, and provide an important window into the continued conflict between the power of individual states to respond to politics within their borders and the need for clear and consistent national policy.” The book came to press before the Supreme Court handed down the Dobbs decision making abortion an unprotected right. Greenky explores the case of Eleanor McCullen, a grandmother who sought to counsel women against getting an abortion. The dilemma involved whether she had the right to voice her views and whether the women entering the clinic should be able to hear it. “A newly enacted Massachusetts law created a buffer zone around patients entering and leaving a facility that provided abortions.” But how could Ms. McCullen counsel from several feet away? She sued the state to stop the law and won the case.

These and many other cases are illustrated in When Freedom Speaks. Besides a table of cases and a thorough index, the book has a handy glossary to navigate the sometimes technical and confusing aspects of law. While the history of free speech can be spectacular and disappointing in turn, it needs to be understood that cases are decided not necessarily by emotional speeches or harrowing courtroom drama, but by nine justices arguing the finer points of standards and technicality.

When Freedom Speaks by Lynn Greenky is an excellent introduction and exploration of the contentious field of First Amendment jurisprudence. Both entertaining and educational, it provides the knowledge necessary for an informed electorate. Like a good legal conundrum, it offers opportunities to ask important questions and spark lively arguments.