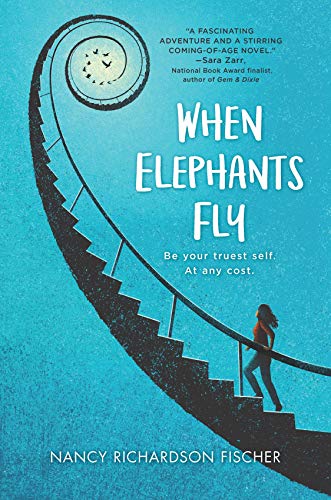 “Nancy Richardson Fischer deserves high praise for her well-researched and endearing novel. Her imagination, craft, and effort has resulted in her writing a piece of fiction that is worthy of winning a prize.”

This young adult novel by Nancy Richardson Fischer highlights the effects of schizophrenia. Alongside the struggle of Lily, its main character, runs a storyline about elephants and the plight they face when kept in captivity.

This is a compelling story from start to finish that expresses emotion and tenderness in equal measure. Despite being 380 pages long this will not perturb the reader, who will struggle to put it down from the outset. This novel goes way beyond being a mere story. It introduces young readers to the complexities and emotional disturbances faced by those whose lives are affected by schizophrenia.

“A lot of people with schizophrenia don’t have a happily-after-after. Many never find the right medication. Some go off them because the side-effects are worse than the illness. There are some individuals who have one episode then never have another one. But it is also true that 20 and 40 percent of those that have continued episodes, attempt suicide and up to 10 percent succeed. Lives are derailed. Families are shattered. Dreams end. The only promise of schizophrenia is that there’s both hope and despair.”

Lily is 18 but when she was 7, her mother, a paranoid schizophrenic, tried to kill them both by attempting to jump off a building. Although both were rescued, Lily’s mother later committed suicide in prison.

Lily is a melancholic young woman nearing the end of her secondary education with plans to study journalism at university. Her best friend, Sawyer, is gay. He comes from an affluent background but has relationship issues with his parents who struggle with his sexuality. Lily and Sawyer look out for each other, although Lily largely consumes their friendship with her anxiety about developing schizophrenia and following in her mother’s footsteps.

Lily’s internship at the Pennington Post gives her life the focus she needs. When an elephant at the local zoo gives birth, Lily is tasked with writing about the baby elephant (affectionately named “Swifty”). Her articles about Swifty’s progress attract a large following, but then things go horribly wrong.

Swifty is rejected by her mother—something not uncommon among elephants kept in captive habitats—and when Lily witnesses the mother elephant charging toward Swifty one day, she runs into their  enclosure, stands between mother and baby, and puts her own life in serious danger. Sadly, the story is leaked to the press resulting in Lily, Swifty, and the zoo’s manager facing dire consequences.

The zoo’s breeding program has an agreement in place with a circus named Walker’s, whereby if a calf is rejected by its mother, the calf is handed over to be trained. Despite the zoo’s best efforts to reignite a bond between Swifty and her mother, pressure looms from the circus, and Swifty’s fate is sealed.

The zoo loses trust in Lily after the leaked newspaper article and Swifty’s speedy removal; however, because of her close bond with the calf, she is asked to accompany Swifty to her new home in the hope that she can help her adjust. Unfortunately, Swifty doesn’t adjust—she gets sick. The profit-driven owners at Walker’s circus lie about caring for the welfare of their animals and offer little help.

During one of her regular shifts caring for Swifty, Lily catches the eye of Otis, the youngest son in the family circus. He is handsome, lean and moody—an almost archetypical James Dean character—and he likes elephants. He also likes Lily and she him, but neither appear to be able to demonstrate their fondness to each other, although at times a sexual tension is played out.

They are able to confide their secrets in each other, however. Lily tells Otis about how her mother had tried to murder her, and Otis confides in Lily about a family coverup involving a murder committed by his older brother. Otis hates his family and no longer wants to stay in circus life. Lily’s determination to save Swifty hastens Otis’ plans to break free from life in the circus.

Swifty’s condition worsens. Hopes of survival fade fast, and everyone fears she may die from depression at her mother’s rejection. Walker’s circus remains oblivious to Swifty’s plight, which results in Lily and Otis joining forces. They discover there is an animal sanctuary hundreds of miles away in another city that could provide the care and environment needed to save Swifty, but with Walker’s circus unwilling to give up ownership of Swifty, the only way to get her to safety is to kidnap her.

And that is exactly what Lily and Otis do—much to the anger of their families after it makes front page news. But will they be caught before they reach the sanctuary—or worse still, will Swifty die during the long drive? Will this escapade ignite romance between Lily and Otis? Will this adventure lead to better understanding for Lily about her life and help her overcome the perpetual anxiety of developing schizophrenia like her mother and grandmother? Are happy endings, given the odds, really possible or will compromises have to be made?

When Elephants Fly is a brilliantly well written book, further enhanced by expert editing, which leaves the book completely devoid of errors and typos. But most beautiful of all is the narrative and its effortless flow. Although this is presented as young adult fiction, there is no reason, based on the excellent writing style, why it couldn’t be enjoyed equally by adult readers.

Nancy Richardson Fischer deserves high praise for her well-researched and endearing novel. Her imagination, craft, and effort has resulted in her writing a piece of fiction that is worthy of winning a prize. This really is an outstanding piece of fiction that cannot be recommended enough.