When a Duke Loves a Woman: A Sins for All Seasons Novel 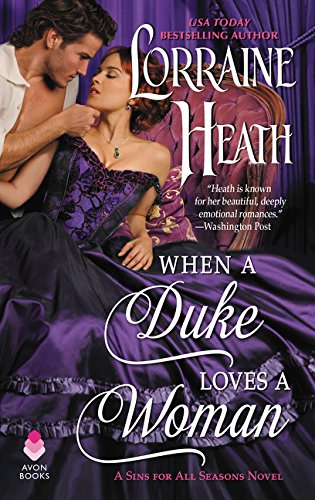 Gillie Trewlove grew up on a baby farm, a place where unwanted offspring are sent. She was raised with the four other children there and all consider themselves siblings.

Ettie Trewlove raised her “children” well and educated them likewise. Mick became a well-to-do businessman, finding his father and through him married a nobleman’s daughter. Aiden and Finn are also aware of their titled parents’ identity. Beast and Gillie have no idea who their fathers might be, and they don’t care.

With Mick’s help, Gillie buys a tavern, The Mermaid and the Unicorn, a popular place with the folk in that part of Whitechapel. She’s unmarried, independent, well-liked, and occasionally feared by all.

That’s her lot in life until the night she breaks up a mugging in the street behind the tavern.

Antony Coventry, ninth Duke of Thornley, has just suffered the most humiliating moment of his life. He’s been left at the altar by his bride. Sending him a message through her brother, Lavinia absconds in a coach to Whitechapel.

Thorne goes after her and is immediately waylaid by footpads who would’ve killed him if Gillie hadn’t come alone.

Now he’s being nursed back to health by a woman like no other he’s known—and liking it.

Meanwhile, there’s a missing bride to locate. Thorne doesn’t really love Lavinia, and she’s proven she doesn’t love him by falling for someone else, but it’s his duty to marry her. After all, they’ve been betrothed since a few days after Lavinia was born. The Thornley dukes are all about acquiring land, and marriage to Lavinia brings with it a parcel they’ve wanted for generations. The bride-to-be can’t be found, however, and the more Thorne is in Gillie’s company, the more he realizes he doesn’t want to marry Lavinia, that duty has abruptly become an obstacle to his happiness.

Gillie may not be noble and she may own a tavern but she’s the most independent and likewise the most beautiful woman he knows. Much as she comes to care for Thorne, she doesn’t want to marry because in this day and time, all her property will become her husband’s, and she isn’t about to lose everything she’s got just to get a ring on her finger.

She compares their situation to the creatures in the name of her tavern.

“‘The mermaid lives in the sea. The unicorn can’t go there, can he? The mermaid can come to land but not for very long. So they can have a friendship but nothing more. They can never be together.’”

How can Thorne convince her that a mermaid and a unicorn can make a go of it and have a happily ever after?

This is a bit of a different period romance in that it has a very independent and strong female main character who isn’t seeking a husband and is quite capable of taking care of herself. Gillie isn’t a damsel-in-distress and in the very first pages, proves her presence is enough to send footpads scurrying. She may wish for love in her life but she isn’t willing to give “all for love,” if it means relinquishing everything she’s worked for. Until she meets Thorne, that is, and then she has to find a way to have her tavern and the duke, too.

Spectacle-wearing Thorne is also a bit off the beaten path as the hero of the story, with the tables being turned as far as plots go from the very beginning. He’s the one left at the altar. He’s the one being rescued from danger. Instead of being a rebel as romance heroes generally are, he’s a man who’s always followed the rules. He’s also never been in love, and the emotions Gillie engenders frighten him a little as he sees how the system he’s always obeyed may cost him the woman he loves.

With Gillie in his life, Thorne begins to break those rules, from waiting tables in her tavern, to finding a way to have the woman he loves.

The other characters in the tale, from Gillie’s “brothers” are as well-defined as Thorne and Gillie. Mick’s story has already been told, Finn’s is to come, and, one hopes, the other brothers’ stories as well. Perhaps even Thorne’s mother, the duchess, and the young urchin Robin might later have their own story, also. The identity of Lavinia’s lover isn’t disclosed but perceptive readers will immediately guess who he is, especially when the blurb of the next entry in the series leaves little doubt.

Diehard romance fans may be a little taken aback by the fact that the usual plot forms aren’t followed in this romance, but that is what makes it so enjoyable. Like Gillie, the story breaks the mold and therefore becomes even more enjoyable and intriguing as it proves that duty isn’t everything and opposites may very well find a way to an acceptable attraction.